– DIRECT FROM THE REFUGEE CAMPS – 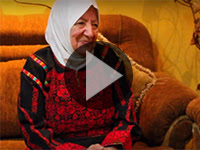 Mariam lFathalla interview (2-min. version)
On May 14, 1948, as Zionist leader David Ben Gurion was proclaiming a Jewish state in Palestine, his troops drove out the inhabitants of the ancient Palestinian town of al-Zeeb. 18-year-old Mariam Fathalla was one of them. She and her young husband fled to Lebanon. By year's end the 4,000-year-old community had been leveled. More than half of all Palestinians were killed or expelled and more than half the cities, towns and villages disappeared, a crime that Palestinians call al-Nakba (the Catastrophe). 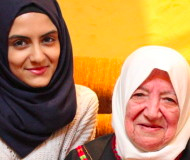 Now 86 years old, Mariam has spent the last 68 years in crowded, makeshift refugee camps in Lebanon. She has raised three generations, all waiting to return to Palestine. She has seen five Israeli invasions of Lebanon, as well as the 1976 Tel al-Zaatar camp massacre that killed more than 2000 refugees there.
Mariam wants meet you.  So does Amena Ashkar, the great granddaughter of other Nakba survivors.  They have a different message.  They do not live in Palestine.  They have no citizenship anywhere.  They do not live under Israeli occupation. Israel does not allow them to visit their homes, much less live there.  Amena has never met an Israeli, and Mariam not since 1948. They have a different perspective.
VENUE: St. John's Presbyterian Church
TIME: Friday, June 3, 7:00 p.m.
LOCATION: 2727 College Ave., Berkeley (Berkeley BART)
CONTACT: 510-236-4250, solidarity@ism-norcal.org
FREE EVENT
-donations to support tour expenses gratefully accepted-