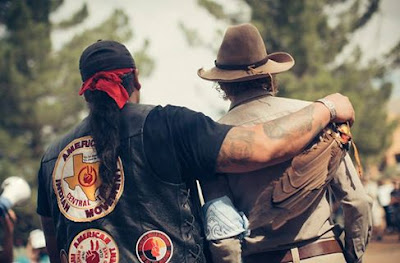 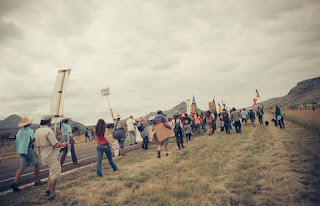 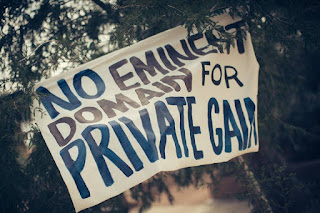 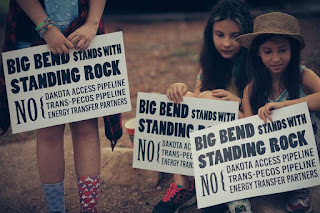 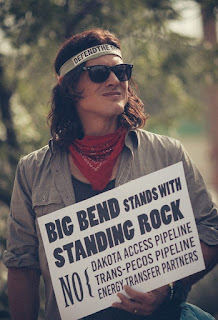 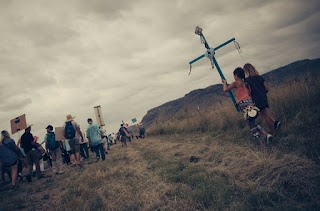 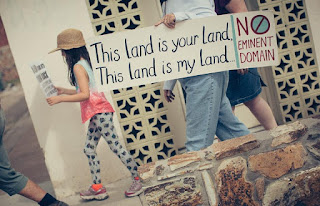 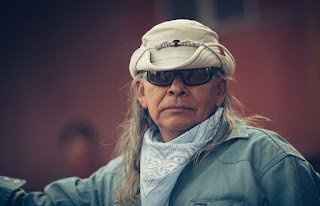 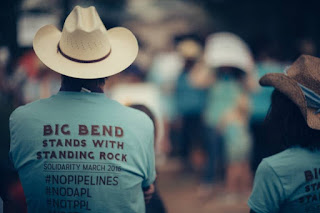 
By Big Bend Conservation Alliance
Censored News
Yesterday members of the American Indian Movement of Central Texas, local descendants of indigenous tribes, and citizens long involved in the Trans-Pecos Pipeline struggle marched against the Trans-Pecos Pipeline and the Dakota Access Pipeline in North Dakota, in solidarity with the Standing Rock Sioux.
About a hundred marched the three and a half miles from the center of Alpine to the pipeline crossing of 1703, rallying briefly at the gates of the Pumpco office / utility yard where AIM members waved their flags in broad gestures of disapproval. At the crossing, the group massed around the west side of the road where a stepped gapping hole has been prepared for the tunneling beneath the road. This movement is about more than a single pipeline. It's about respecting the natural world and protecting our water and land for future generations. @standingwithstandingrock #nodapl#waterislife #notranspecospipeline #standwithbigbend #thankyou American Indian Movement Of Central Texas

Great report... on time!! as usual... you go!! need to contact aimctx... got sister in el paso visit to family, who wants to rehook up with ray or someone from aimctx... to help ... ready to bus up to san antonio... tried fb site, no info, will email you more info. thx, margarita

Private companies for private profit take peoples land; cut a deal or have your property condemned.
How many people worked hard all their lives, trying to do the right things for their families, then along comes a company and takes their dreams away? Energy Transfer Partners has tanks, airplanes, drones, guards, attack dogs, police, shotguns, tear gas, aimed at the people in Standing Rock, to forcefully take what they want.

Is it partly because some wise-guys allowed corporations the same rights as people? The special access laid at the feet of corporations has undermined democracy in America. Even Eisenhower warned of the creeping menace of corporations moving in on political power to gather more political control to go along with their market control. Challenging such inherently undemocratic institutions such as the fossil fuel industry is I believe truely standing up for democracy, freedom and human rights. It is inspiring and heartening to witness Native American people trying to protect their land and the precious clean water that flows through it. The People at Standing Rock are fighting the good fight! Across the world people are being inspired by the Standing Rock struggle.

Eminent domain is supposed to be used for the public good, like building a road, not for private profits.