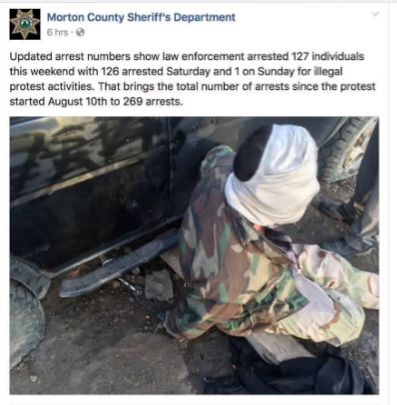 The American jailers gets their kicks from torturing vulnerable people in jail like women, poor, black & brown, youth, & mentally disabled.
!!! 80,000 men & women in jail were raped in 2015 in American prisons!!!
And that is UNDER REPORTED. (Only 35 percent of rape in general population is reported).
So there are probably 240,000 Rapes in jail in America in a year!!
Jailers don't give necessary medicines. Guards sexually assault women & youth. Or let other prisoners do assaults while they sickly watch.
The jailers play with words like necessary. Necessary is if a person is literally going to die.

Police do hooding so they cannot be IDENTIFIED when they are beating somebody up.
Hooding can suffocate a person too.

This is just wrong. People should never be treated so poorly. We are all human. I pray that this pipeline is dismantled. Law enforcement has broken the laws since this started.

I don't doubt they're doing all of the torture acts!


What makes the water of the Missouri River that runs through Bismarck, N Dakota more special than the Missouri River water that runs past Standing Rock Reservation a few miles downstream?
The fine people of Bismarck protested the location of the Dakota Access Pipeline for fear it would contaminate their drinking water. The city council got DAPL to relocate it. The people of Bismarck didn't have to demonstrate. They didn't have to leave their homes and camp out. They didn't get pepper sprayed. They didn't get bitten by attack dogs. They didn't get thrown to the ground. They didn't get bones broken by batons. They didn't get arrested. They didn't get property confiscated. They didn’t watch on in horror as bulldozers obliterated ancestors’ graves and desecrated sacred sites. They didn't get stripped searched. They didn't have to post bail. They didn't have to hire legal counsel. They didn't get handcuffed. They didn't have to sleep NAKED in a jail cell. They weren't kept from their families. Their families weren't left to wonder what happened to a loved one. They were not subjected to police intimidation. They didn’t bear the brunt of law enforcement innuendoes or slander.
But, the Native American and other Water Protectors have had to endure these injustices for the same reason---protection of their drinking water. WHY HAVEN’T THE FINE CITIZENS OF BISMARCK RALLIED AND SUPPORTED THEIR BROTHERS AND SISTERS OF THE STANDING ROCK SIOUX NATION FOR FIGHTING FOR THE SAME RIGHT---SAFE DRINKING WATER?
WHERE IS THE JUSTICE? WHERE IS EQUAL PROTECTION UNDER THE LAW? WHY ISN'T THE LAW APPLIED EQUALLY TO ALL PEOPLE? WHY HASN'T DAKOTA ACCESS BEEN FORCED TO RELOCATE IT FOR THE SIOUX TRIBE? WHY ISN'T LAW ENFORCEMENT BACKING THE TRIBE AND THE PROTECTORS?
We all know the answer---RACISM---AS PLAIN AS THE RIOT GEAR, THE ARMORED VEHICLES, THE SOUND CANNONS, THE ATTACK DOGS, THE PEPPER SPRAY, THE HOVERING AIRCRAFT, THE BLOCKED CELL PHONE SIGNALS, THE HANDCUFFS, THE STRIP SEARCHES, THE ROAD BLOCKS, AND THE INTIMIDATION BY MILITARIZED LAW ENFORCEMENT OFFICERS.
Every drink of water taken by Bismarck folk, should choke them because they turned their backs on fellow human beings. America knows. The world knows. Cowards die many times. Warriors and Protectors die only once. Mother Earth is all any of us have, and Her sacred waters give us all life. We do this for our children, our grandchildren, and our future existence. AHO.

Janice Mitich, this the best post I've read so far in favor of the Water Protectors, you definitely nailed it. Good old fashioned racism, isn't that the truth? Easy to say but for some not so easy to admit. Thank you for the strong words of truth.

Sadly, this photo - as well as a few others that had been posted (but culled and shared by other alternative media journalists) has been removed from the Morton County Sheriff's Department Facebook Page. Would you suppose that your article, as well as the intelligence and outrage of others, tipped their legal staff to what they have done?
Oh well, too bad for them that we live in a modern, digital era. Once it hits the internet, it is on here FOREVER! KARMA is a fair woman, and she will mete out justice.
Thank you for alerting us to the TRUTH! I'll share a link to your article on my Facebook page - Constitutional Truth.
Blessed Be - Char

Thanks for your comments. Morton County Sheriff Dept. posted the photo, then removed it. Today we were able to verify the details, so Censored News posted it. Best, Brenda, Censored News

Native American Indians are race in America that are most likely to be killed by police.(Lakota Peoples Law Project)

We can debate the reasons behind this treatment, we can cite historical events that clearly illustrate what the white man thinks about the Indigenous peoples of this land. The question that is burning for an answer is, " How can we as human beings be so hateful, cruel, and unfair?"
No, unresponsive is more like it. This is happening, all these atrocities. Our leaders, at the National level, are NOT DOING ENOUGH to stop this. The local justice system is being ALLOWED to do these ILLEGAL and UNSOLICITED acts against the Protectors. We need the World to stop being passive against who really runs this country....the wealthy, the corporations, and money. Stand up people. For human decency, for protection of what little resources they haven't already destroyed. For life, people. This IS NOT America...home of the free! This is home of big money, and if your not counted among those ranks....YOU ARE NOTHING! What good will the color of your skin do you when you are dying....your children...grandchildren, are dying because we've destroyed our Earth?

The Police in ND are crazy!
Do they need a mirror or something to see how dumb they look? How stupid!

I'd like to add that law enforcement agencies are not required to maintain official fb pages but once they do, as in the case of Morton County Sheriff's department, they are NOT allowed to delete any comment, post or photograph/video/file from their site since they became a matter of public record once posted! It is irrelevant who made the post...the public or the sheriff's department!

You nailed it on every point. A'ho

This in Amerikà and the world. The global elite thinks of the rest of us as cattle that can be herded and killed at will.

This is indeed the truth of our situation. We live in a world ruled by murderous psychopaths who think that the rest of us are inferior and can be killed-to tired-herded at will

If your looking for justice you've come to the wrong place, the earth

How many tax dollars are being used (military vehicles, private security firms, law enforcement from multiple states) to thwart the will of the people??

Disbelief jailing women, naked,demeaning terror against a human being,against her Human rights
We must Stop this HEll. inflected on these.people

These people at the police dept. need to be removed, all of them, and a fresh team of local police who do have a heart, a conscience and the spirit of humanity.
Bring peaceful to the police dept. and fairness and peace will happen.

morton county sheriff's would likely be a tiny hole in the wall. so "tipping legal staff" would be akin to hollering into the basement, no corporate like offices here. .

they cant fully erase it anyway; our "patriot act" and culling of all internet stuff is robotic now, and impossible to fully erase. way to go, sheriff's.

thats never been a problem for the oil companies, back in the mining days they also ran, they hired mercenaries with guns to kill off miners angry about deaths from collapses of mines; instead of fixing it; and it only ended when the state could no longer afford to be sending their cops on behalf of the miner....tied to rocketfellas. Here is a good one for you: The three largest companies involved were the Rockefeller family-owned Colorado Fuel & Iron Company (CF&I link: colorado ludlow massacre --
https://en.wikipedia.org/wiki/Ludlow_Massacre

same folks as the ludlow massacre. look it up. mining that time, same owners.