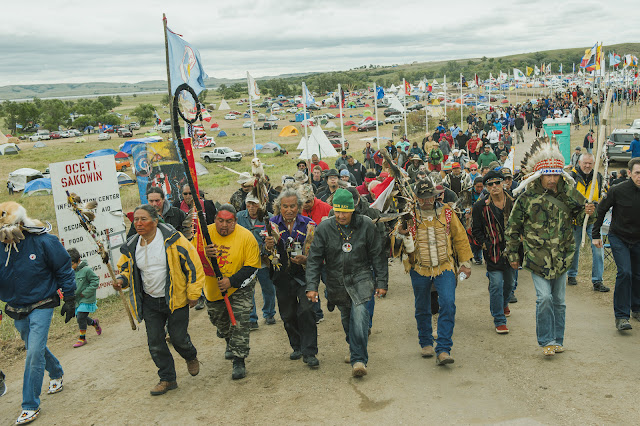 U.S. Court of Appeals denies injunction that would have halted construction during appeal process

CANNON BALL, North Dakota — The U.S. Court of Appeals for the District of Columbia Circuit today rejected the Standing Rock Sioux Tribe’s request for an injunction to halt construction of the Dakota Access Pipeline by Texas-based Energy Transfer Partners. The decision comes as the Tribe is pursuing an appeal to stop construction while the rest of the case proceeds in U.S. District Court.
“The Standing Rock Sioux Tribe is not backing down from this fight,” said Dave Archambault II, Chairman of the Standing Rock Sioux Tribe. “We are guided by prayer, and we will continue to fight for our people. We will not rest until our lands, people, waters and sacred places are permanently protected from this destructive pipeline.”
The 1,168-mile pipeline crosses through the Standing Rock Sioux Tribe’s ancestral lands and within a half mile of the reservation boundary. Construction crews have already destroyed and desecrated confirmed sacred and historic sites, including burials and cultural artifacts. The original pipeline route crossed the Missouri River just north of Bismarck, the capital of North Dakota. The route was later shifted downstream, to the tribe’s doorstep, out of concerns for the city’s drinking water supply.
“We call on Dakota access to heed the government’s request to stand down around Lake Oahe,” said Jan Hasselman, lead attorney from Earthjustice, which is representing the Tribe. “The government is still deciding whether or not Dakota access should get a permit. Continuing construction before the decision is made would be a tragedy given what we know about the importance of this area.”
In its ruling, a panel of U.S. Circuit Court judges denied the tribe’s request for an injunction, allowing construction to continue as the Tribe’s appeal is considered. Previously, the Department of Justice announced a temporary halt to pipeline construction on federal lands and requested that Energy Transfer Partners voluntarily halt construction on private lands.
“The federal government recognizes what is at stake and has asked DAPL to halt construction,” said Archambault. “We hope that they will comply with that request.”
Archambault notes that by allowing pipeline construction to continue, today’s ruling threatens millions.
“This ruling puts 17 million people who rely on the Missouri River at serious risk,” said Archambault. “And, already, the Dakota Access Pipeline has led to the desecration of our sacred sites when the company bulldozed over the burials of our Lakota and Dakota ancestors. This is not the end of this fight. We will continue to explore all lawful options to protect our people, our water, our land, and our sacred place.”
Link to court documents.
https://ecf.cadc.uscourts.gov/cmecf/servlet/TransportRoom

ABC News reports:
A federal appeals court on Sunday opened the door for construction to resume on a small stretch of the four-state Dakota Access pipeline while it considers an appeal by the Standing Rock Sioux Tribe.
The ruling removed a temporary injunction that halted work on the project.
The tribe had asked the U.S Court of Appeals for the District of Columbia Circuit to continue work stoppage on the pipeline within 20 miles of Lake Oahe in North Dakota. The court earlier ordered work to stop while it considered the motion.
In a statement, Standing Rock Sioux Tribe Chairman Dave Archambault II said that the tribe "is not backing down from this fight."
"We will not rest until our lands, people, waters and sacred places are permanently protected from this destructive pipeline," Archambault said.
Owned by Dallas-based Energy Transfer Partners, the $3.8 billion, 1,172-mile project would carry nearly a half-million barrels of crude oil daily from North Dakota's oil fields through South Dakota and Iowa to an existing pipeline in Patoka, Illinois, where shippers can access Midwest and Gulf Coast markets.
The company did not immediately return an email Sunday seeking comment on the court's decision.
The pipeline passes near Standing Rock Sioux reservation land that straddles the North Dakota-South Dakota border. The tribe's protest encampment near the confluence of the Missouri and Cannonball rivers has swelled to thousands at times as demonstrators from around the country joined their cause.
Tribal and state officials also are at odds over whether sacred sites were destroyed while digging the pipeline corridor. The state archaeologist has said an inspection found no sign that the area contained human remains or cultural artifacts.
Congressman Kevin Cramer applauded the ruling. "I look forward to the workers getting back to work, doing the jobs they need to do Monday morning," the North Dakota Republican said in a statement.
The court hasn't decided on the tribe's appeal of a September ruling by U.S. District Judge James Boasberg, who declined to shut down work on the entire pipeline. He said the Sioux hadn't demonstrated that an injunction was warranted.
Though work may resume, three federal agencies — Interior, Justice and Army — immediately ordered that construction stop on land owned by the U.S. Army Corps of Engineers next to and underneath Lake Oahe as it reviews its permitting decisions.
No timetable has been set for the federal review.
http://abcnews.go.com/US/wireStory/court-construction-resume-small-stretch-pipeline-42688134

Wth America!!!! Wrong move again. This is your chance to stand on the right side for once. To not let greed and money consume you and to protect our earth. Wake up!!! You have slaughtered the Native Americans for years and you have an opportunity to do right with then and this is the thanks they get? This is what you do? To protect the millions who rely on this water for life.... And you risk the inevitable polluting that water.... It's no wonder our world is where it is. #shame

We are on our way to going off a cliff. The Missouri River and Native burial sites and other sacred sites are priceless. This action only amplifies how draconian our government is when it comes to honoring the Indigenous Peoples and the precious fresh, clean water we all need. This a sad day for the U.S., not just the Native Americans.