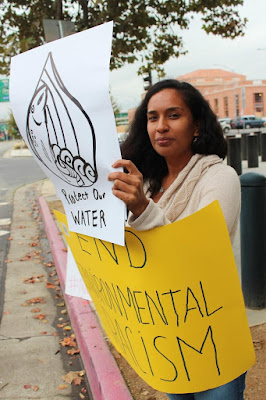 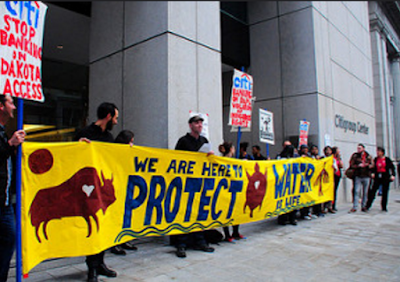 Censored NewsThe Sacramento Area Friends and Relatives of the Lakota Nation sponsored a peaceful and indigenous faith-based event protest from 3 pm to 5 pm at the federal building at 501 I Street in Sacramento in support of the Standing Rock Sioux. Fifteen people attended the event to call attention to and support the Standing Rocky Sioux Tribe of North Dakota and all Native American and non-Native American allies who have been assaulted in their struggle to stop the construction of the Dakota Access Pipeline (DAPL).The protesters held colorful signs proclaiming, “Protect Our Water, “ “End Environmental Racism,” “No DAPL,” “Stand With Standing Rock,” “Native Rights Matter,” and “Love Water! Not Oil! No DAPL!” A number of people in vehicles passing by the event honked their horns in support of the protest.

The DAPL would bring Bakken fracked crude oil underneath the Missouri River, endangering the 18 million people who drink from the river, as well as many species of fish and wildlife. The protesters strongly oppose the police brutality, police repression and civil rights violations brought upon the Standing Rock water protectors by Governor Jack Dalrymple of North Dakota, Morton County Sheriff Kyle Kirchmeier, North Dakota District Attorney Chris Myers, and the private security force of Energy Transfer Partners, a Dallas-based corporation."The situation at Standing Rock has escalated to the point that all people who support human rights, human dignity and the inherent rights of Mother Earth to live and thrive must take a stand,” said Francisco Dominguez (Tarahumara). “The violence perpetuated by the state of North Dakota against the Lakota people and its allies is a moral disgrace." The latest protest follows several that were held in Sacramento at Citibank, the federal building and the state capitol in September. Contingents of people from California, including members of the Hoopa Valley, Yurok and Karuk Tribes, have gone to the Standing Rock to support the struggle to stop the pipeline. On the day after the latest protest in Sacramento, two caravans of people from Sacramento left for Standing Rock to support the water defenders.On October 4, the City of Davis, California passed a resolution declaring their solidarity with the Standing Rock Sioux Tribe’s opposition to the Dakota Access Pipeline.  Davis joins many other cities across the country, including Seattle, Saint Paul, Minneapolis, Berkeley, Santa Barbara, Oakland and Sitka, Alaska, in opposition to the pipeline.
Carol Standing Elk, Francisco Dominguez, Juliette Beck, Lynn Nettler, Becca Paine and Nick Buxton led the successful campaign to work with the City Council to pass the resolution.The resolution declares: “WHEREAS, the City of Davis has worked diligently for many years to secure and protect our own sustainable clean water supply and supports the Standing Rock Sioux Tribe in opposing the construction of the Dakota Access Pipeline that passes under the Missouri River and other water water sources with the recognized threat of contamination of existing clean water supplies with potential future oil spills.NOW, THEREFORE, BE IT RESOLVED that the City Council of the City of Davis, stands in support of the opposition to the Dakota Access Pipeline process and project and calls on all residents of Davis to raise awareness about this important struggle for Indigenous sovereignty and environmental justice and to support the Sacred Stones Camp efforts.”As support for the water protectors at Standing Rock builds throughout the state and nation, native peoples continue to face brutal assaults, unjustified arrests, humiliating strip searches and overall mistreatment at the hands of a multi-county, interstate police force.“The struggle to protect sacred land has been bitterly contested by police and state officials,” said Thomas Joseph, II a community organizer with PICO-federation True North and a member of the Hoopa Valley Tribe in California. “Early one morning, I gathered with other native people to pray and sing on lands being destroyed by the Dakota Access Pipeline. We were met with brutal force by a multi-county, interstate military force that was large enough to overtake a small country.”“Although we complied with police commands, more than 140 of our youth and elders were wrongly arrested and detained for three days. We were pepper sprayed and beaten to the ground. One of our members suffered a broken arm in the police attack. For our part, indigenous communities want nothing more than to protect sacred land and our water source. While we are wounded physically and emotionally, we refuse to back down,” said Joseph.Dozen people arrested in front of Citigroup in San FranciscoSan Francisco, CA- Early this morning, 12 people were arrested in a daring occupation of the Citigroup Center lobby in San Francisco’s Financial District. The occupation demanded that Citibank, one of the largest funders of the Dakota Access Pipeline, stop financing the highly destructive project.The action comes in direct response to the crackdown by North Dakota law enforcement of protest camps blocking the construction of the Dakota Access Pipeline where 141 were violently arrested on Thursday. “We are determined to prevent the pursuit of extreme energy from destroying our communities, natural systems and climate, therefore confrontational, protests like the water protector camps are necessary actions for change,”  said Corazon Amada of Diablo Rising Tide, who was arrested at today’s action. “We stand in solidarity with those who stand up for us all.”The Dakota Access Pipeline has made international headlines in the past month as thousands have gathered in encampments along the Missouri River to block construction of the 1,100 mile-long pipeline. The pipeline would carry fracked-oil from the Bakken shale fields of North Dakota through 4 states to Patoka, IL for dispersal to several different pipeline systems for eventual refining and overseas export.The effort has reported over different 100 tribes represented at the camps. The pipeline threatens the Missouri River, an important source of water for the Standing Rock Sioux.   “I am here today because Indigenous friends and allies in North Dakota are literally risking life and limb to stop this pipeline,” said Christy Tennery-Spalding of Diablo Rising Tide, who was also arrested at today’s action. “Oil companies and banks like Citigroup do not care about clean water and clean air of impacted communities. These companies only motivation is profit and we’re here today to say, ‘NO MORE!’”  Citigroup is a lead arranger and lender to the project. In August, the bank arranged for a $2.5 billion loan to the collection of oil companies building the pipeline. Along with Citigroup, Bank of Tokyo-Mitsubishi UFJ, Mizuho Bank, and TD Securities are major lenders of the project. Currently, Dakota Access can only withdraw $1.1 billion from these lenders until certain government permits are issued.   For more info, go to diablorisingtide.org
at October 31, 2016