Please post & distribute.
MNN. APR. 13, 2016. The Toronto office of Indian Affairs is occupied over the suicide crisis of the onkwe’hon:weh at  Attawapiskat on James Bay. Last week a black man was shot dead at a Montreal North demonstration. A day later at Lac Simon a Quebec cop rammed anishinabe Sandy Michel and then shot him multiple times. The anishinabe and supporters peacefully demonstrated in Montreal on Monday, April 11, and were attacked by the city cops and riot squad. Several months ago the women of Val d’Or exposed the systemic Quebec police attacks and rapes of young women and youth. Recently the SQ put out a worldwide false story that Kahnawake and Six Nations kanionkehaka [Mohawk] were being raided for contraband and “organized crime”, with terrorism ties. This was completely false, and broadcast on Global and CBC, which shows their complicity.

Our territories are in the way of the banking shareholders resource extraction program. They want us out of way of their pipelines, dams, diamond and gold mines and forestry. They want everything, even the water and the air. Our lives are being made intolerable so we can be killed or removed by military force. The soft kill program is not working fast enough [vaccines, GMO foods, etc.]. It appears they are going to the military option.

The anishinabe are under the tree of peace and were a signatory to the Great Peace of Montreal in 1701. They are our friends and allies under the teiohateh/Two Row Wampum Agreement. We have a responsibility to the agreement.
Cops are in a rage against us and they don’t why! It’s getting ugly! Last time something like this happened, Canada went to war in Saskatchewan in 1885. The SQ appears to be trying to run Quebec as a private criminal enterprise like the Cosa Nostra in the “Godfather”. The false story posted about us being part of “organized crime” travelled around the world on their criminal intelligence network.

VIDEO: Rage Against Police in Quebec 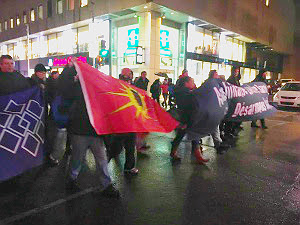 April 2016, Montreal cops murdered Jean-Pierre Bony by shooting him with bullet to the head, for allegedly fleeing a drug raid. Jean-Pierre was unarmed

His community took to the streets to express their rage. People attacked a police station and set several vehicles aflame.

Later that week, police in the indigenous community of Lac-Simon murdered Sandy Michel, a 25 year old man, whose brother was also killed by cops.