HAUL NO! TOUR REPORT BACK PART 1 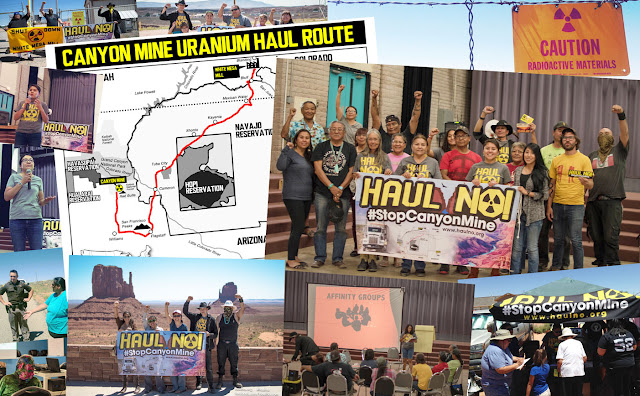 HAUL NO! TOUR REPORT BACK PART 1Home / Blog / Haul No! Tour Report Back Part 1Building Momentum in Resistance to Grand Canyon Uranium Mining & TransportPhotos by Dustin Wero | Instagram: darth_wero
In late 2016 Indigenous anti-nuke & sacred sites organizers decided something had to be done to confront the threat of radioactive uranium ore transport from the Grand Canyon to the White Mesa Mill. In December of 2016, volunteer-based Haul No! was formed to raise awareness, organize, and take action to protect sacred lands, water, and our health from this toxic threat. Haul No! got to work right away researching, creating outreach materials, exploring and advocating policy changes, and planning for direct action to stop the transport.In March 2017, Energy Fuels Inc. (EFI), the owner of Canyon Mine and White Mesa Mill (the only commercially operating uranium processing plant in the US), announced that it could be ready to start mining uranium as early as June 2017. Haul No! kicked into gear and started organizing an awareness and action tour along the 300-mile planned haul route, coordinating with community hosts along the way.
Read the report at Haul No! https://www.haulno.org/2017/06/30/haul-no-tour-report-back-part-1/
French translation by Christine Prat at http://www.chrisp.lautre.net/wpblog/?p=4120
at July 08, 2017