EAGLE BUTTE, South Dakota -- Joye Braun, Cheyenne River Lakota, was one of the first to camp at Sacred Stone Camp and call for water protectors to come to defend the Missouri River from Dakota Access Pipeline. She was there when the first teepees went up. Joye stayed as the camps grew to thousands of water protectors, and as the attacks intensified.

"I see this movement as giving the youths a lot of hope," Joye says.

Listen as Joye describes how the Cheyenne River created a camp for the water protectors, as the camps were leveled at Standing Rock in February 2017.

Speaking with Spirit Resistance Radio at Wakpa Waste Camp in Eagle Butte, Joye describes the arsenic in the water in South Dakota and the recent successful halt to the drilling of a bore hole for a potential uranium waste dump.

There is now a Man Camp going up within a mile of Cheyenne River Lakota land, near a children's school. Joye describes the threat to the women and children, as these men are brought in for construction on the Keystone XL.

Already at the Mandan, Hidatsa and Arikara Nation, Fort Berthold, North Dakota, there are missing women, homicides and sex crimes because of the oil field Man Camps.

Joye describes how Water Protector Camps are being created throughout the land, from the Coast of Louisiana and Flint to Montana and beyond. The actions and resistance continues in the Northwest.

As the resistance mounts to drilling, fracking and pipelines, Joye describes how this oil that is damaging the land, and threatening the water sources, is for private corporations and for export. The ongoing destruction targets private land, and family farms, whose lands are being seized for private pipelines.

Joye says there are many ways of being of service, from doing research to babysitting and more. She says not everyone can be in camp.

Listen to her interview with Govinda at Spirit Resistance Radio. 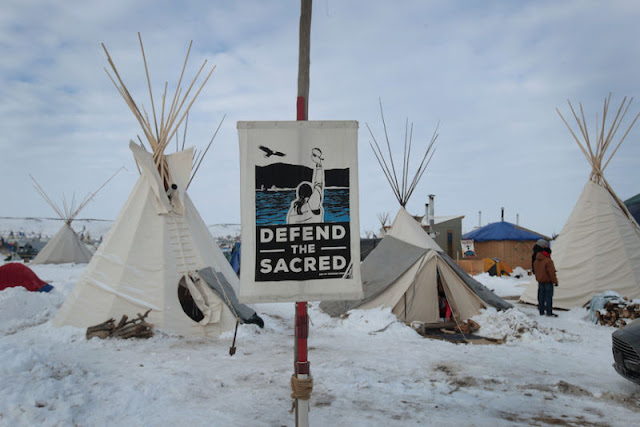