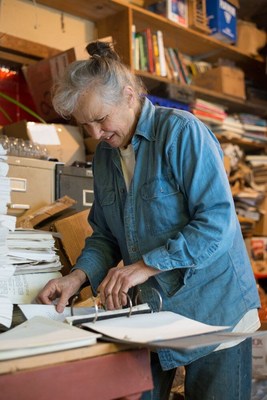 The Intercept -- Incredible story of a barn full of court documents which will now be available in the Poison Papers, including docs on Agent Orange and Monsanto, and the woman who lost her four children when her home burned to the ground in a suspicious fire as she fought the poisoners. Read the story of Carol Van Strum at: The Intercept: https://theintercept.com/2017/07/26/chemical-industry-herbicide-poison-papers/

Gemstone File -- A collection of journalistic documents spanning more than five decades has now been made available to the public for free.
NEW YORK, July 26, 2017 /CNW/ -- The Gemstone File, a project of Chiron Return, is a collection of documents pulled by three reporters who have covered environmental history since the early 1970s. And it has now been made available free atTheGemstoneFile.org.
Emerging from a barn in Oregon and a storage unit in rural New York State, The Gemstone File has grown and accumulated for more than five decades and now comprises of more than 6,000 documents. It was scanned in over the past 18 months by Award-winning Canadian investigative reporter Peter von Stackelberg. Many important documents in The Gemstone File come from his work with the Leader-Post in Regina, Saskatchewan.
The project also includes author and document collector Carol van Strum (A Bitter Fog: Herbicides and Human Rights), as well as investigative reporter, Eric Francis Coppolino.
In a novel twist on contemporary reporting, none of the documents are leaked. They came from discovery actions in various lawsuits, or were obtained under the Freedom of Information Act.
The file covers numerous agricultural compounds, industrial chemicals and ingredients of household products, many of which are still on the market despite their safety studies being invalidated.
The depositions, memos and scientific records contained in the file reveal many examples of regulatory failure, fraud and deception of the public: proof that what passes for science often is nothing of the kind.
The Gemstone File is a mine of missing information and details on compounds including Agent Orange, DDT, dioxins, furans, glyphosate, PCBs and other chemicals in your food, under your sink and in your bathroom. This resource will serve environmental activists, scholars and contamination survivors for generations, particularly as many of the same companies are now involved with genetically modified agriculture.
All three contributors are available for interview.
About Chiron Return, Inc.Chiron Return, Inc. is a U.S.-based nonprofit organization designed to provide mentorship, documents and resources for journalists. Chiron publishes Planet Waves FM on the Pacifica Radio Network, and teaches the class Investigative Reporting from the Kitchen Table.
Contact:Eric Francis Coppolino
efc@chironreturn.org
(845) 481-5616
http://TheGemstoneFile.org
View original content with multimedia:http://www.prnewswire.com/news-releases/the-gemstone-file-made-available-to-the-public-300494182.html
SOURCE Chiron Return