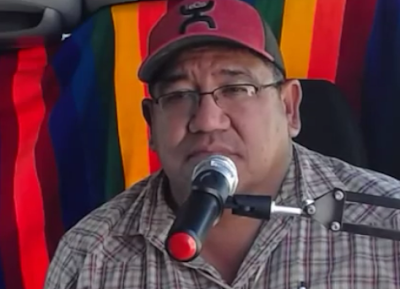 EAGLE BUTTE, South Dakota -- Cheyenne River Chairman Harold Frazier describes his peoples fight against Dakota Access Pipeline, uranium mining and radioactive waste dumping, and Keystone XL pipeline.
Chairman Frazier thanked all the Water Protectors for their sacrifices and standing up for the water.
"We know how important it is to have fresh, clean water," Chairman Frazier told Govinda Dalton in an interview with Spirit Resistance Radio.
"Anytime it is going to impact our water, we are going to stand up and fight for it," Chairman Frazier said of the effort at Standing Rock, from the beginning at Sacred Stone Camp.
Missouri River is the source of clean, fresh water for Cheyenne River.
Currently, Cheyenne River and other tribes are in court litigation with Energy Transfer Partners over the flow of oil in Dakota Access Pipeline.
Chairman Frazier said he hopes this current litigation will be more than just another "dog and pony show," in regards to Energy Transfer Partners and consultation with Indian Nations
Chairman Frazier said there is a uranium mine targeting the area at the headwaters of the Cheyenne River. They are prepared to stand up and stop it.
Cheyenne River also fought a bore hole being drilled for a possible radioactive waste dump, which has been stopped for now.
Keystone XL is once again threatening their water source. The Keystone XL route targets their land, and Chief Big Foot's last camp on the land.
Chairman Frazier said they are prepared to continue the fight against Keystone XL in the higher courts.
Chairman Frazier points out that the corporations are pumping money into the media to brainwash people.
Chairman Frazier urged others to join them in Nebraska in August and support the efforts to halt approval of the route of Keystone XL Pipeline.
"We need to gather down there, and show these commissioners that there are a lot of concerned people."