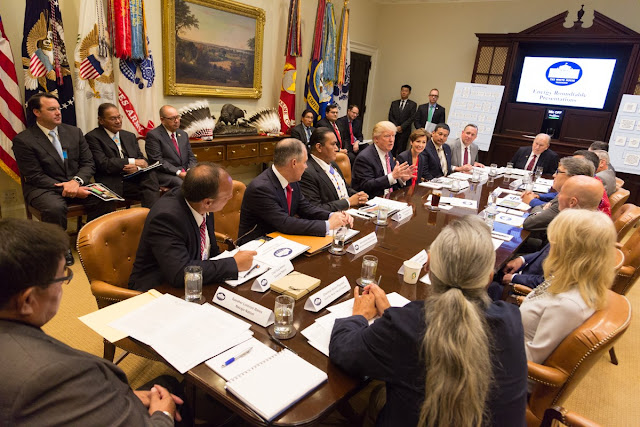 Photos by the White House On Wednesday, President Donald J. Trump hosted a tribal, State, and local energy roundtable at the White House. He was joined by Governors Paul LePage, Kim Reynolds, Pete Ricketts, and Bill Walker, along with State and tribal leaders from around our great country, the White House said. 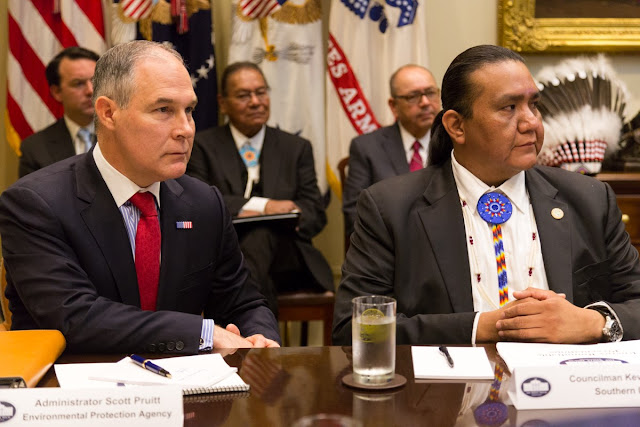 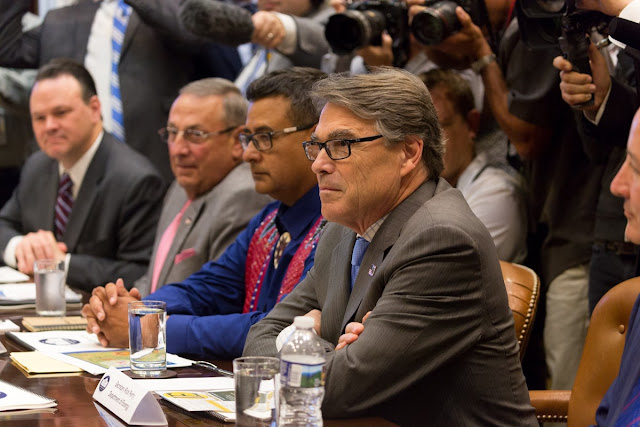 WASHINGTON -- President Trump -- using tribal sovereignty as a trump card -- says he will unlock vast treasuries of resources in Indian country -- naming "coal" specifically.
"We love Indian country, right?" Trump said during a roundtable with ten tribal leaders on Wednesday.
Trump said he is now targeting "untapped resources of wealth." This comes as he targets Indian country with more mining, the lifting of environmental protections, and more radioactive dumping, as in the case of Yucca Mountain.
Trump said his intent is to "usher in a golden age of American energy dominance," while ignoring staggering rates of cancer and respiratory diseases in Indian country from coal-fired power plants and Cold War uranium mining.

Where's the Video of what "the Indians" said to The President on each of the subjects/topics covered? Or, was Rick Perry speaking for the Indians ('though he "don't know Bill that well" [like he knows "Paul"]?

Cant speak for the others, but Chairman Payment isnt a "fort NDN" he's stood along side myself and others,fighting for the Rights of the People for well over a decade.

We would have liked to have heard what the tribal leaders said. We already know drumpfs greedy agenda is. Why are not all tribal leaders invited...esp. those affected by his executive orders??? RENEWABLE ENERGY IS THE FUTURE!!! Keep that COAL AND OIL IN THE GROUND!!!!

You are so right Jimmy. I grew up with Aaron his brother Steve and his sister Janet on Andary and he loves our land and will always put the needs of the land first. He won't sacrifice our lands for anyone and the Soo is too small to hide and we all know each other and where we live...lol. just kidding but seriously he has deep respect, love and honor for mother earth and he knows not to believe the government. When have they ever told the truth to us? It's always been lies and always will be and that won't change. Snakes don't change..they shed the old known skin for a new and unknown skin. That's how they trick the people. It's like the prophecy tells us. They will come with two faces and one will be in friendship and other will destroy us all.

Typical Trump dictated one-sided meeting. No opportunity for Tribal Leaders to speak. The last question quickly squeezed in before they terminated all participation, "Do you believe Climate Change is a hoax?" was ignored. Now he gets to go out and claim he "Had a very good meeting --- beautiful meeting, tremendous --- with our very good NDN leaders who we love."

The snakes in this meeting were the same as always, gov't officials who dominated the entire session.

I'm ashamed of the continued violence of my white culture. If you want to hear/see the true story if this manifest destiny genocide, see "Neither Wolf Nor Dog." Lakota Chief Dave Bald Eagle speaks.
https://www.amctheatres.com/movies/neither-wolf-nor-dog

Please apologise to the snakes. I have realized how automatic it can be to use pig, weasel, wolf, insects etc. in a derogatory sense, when describing despicable humans. The snake of course was cursed in the Genesis story in the christian bible. I have stopped doing this. If I slip, I always apologise. Our animal helpers set the highest examples of living according to the original instructions, we have, and can always learn how to improve our lives from observing and appreciating them.

Dine' pick up supplies at a food bank on the Navajo Nation in New Mexico, on May 20, 2020, three months after COVID began to spread rapi... 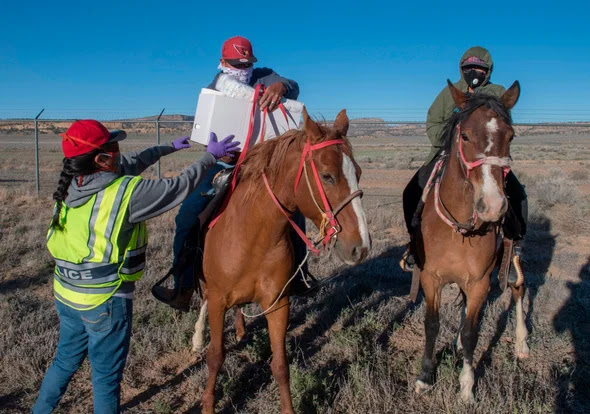