Twitter refuses to tell Censored News why our links have been blocked since September. However, Twitter defends the right of the low-brain-wattage president to make threats, harass others, target individuals, and create an atmosphere of racial hatred that results in deadly violence. The Washington Journal published Twitter's defense of Trump's tweets:
http://washingtonjournal.com/2017/07/03/twitter-finally-broke-silence-trumps-abusive-tweets/
Meanwhile, Censored News links have been blocked by Twitter since September, when we began exposing excessive force by militarized police and mercenaries at Standing Rock, and the public relations schemes of President Obama who used delaying tactics on Dakota Access Pipeline.

The permit for Dakota Access Pipeline was actually granted by the Obama Administration, beginning in the spring of 2014, before Obama went to Standing Rock in June of 2014, according to Dept. of Energy documents.
President Obama refused to halt the police violence against Standing Rock peaceful water protectors, even after Cheyenne River Chairman Harold Frazier made a personal appeal to Obama in Los Angeles. Obama instead went golfing and to a pricey fundraiser. The next day, police at Standing Rock beat water protectors with batons, and shot them with rubber bullets and tear gas.
However, Obama used a shrewd campaign of public relations which involved superficial delaying tactics. The public seldom focused on the fact that it was actually the Obama Administration that granted the DAPL permits.
Now, the federal court is engaged in more superficial legal and public relations tactics, disguised to appear as victories for the people, as the oil flows through the Dakota Access Pipeline. 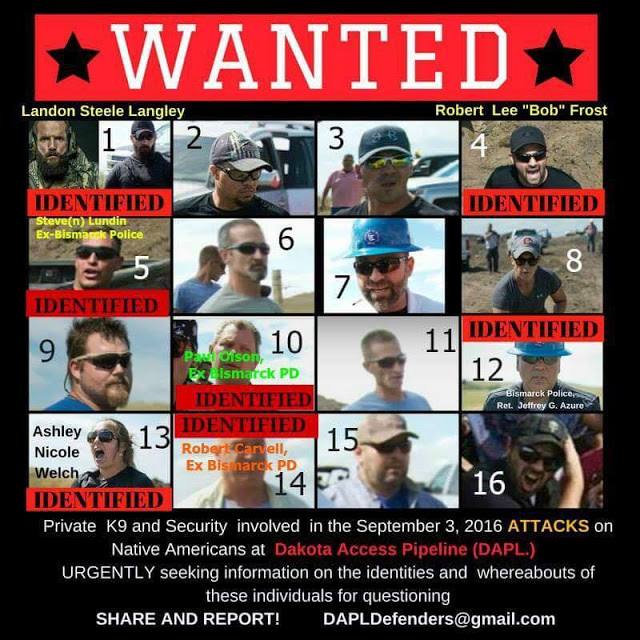 At Twitter, as shown above, this was one of our last posts before Censored News links were blocked in September. It exposed the fact that mercenaries were involved in the dog attack on water protectors defending burial places from bulldozers., This post identified retired Bismarck police officers hired as security thugs by DAPL.
Of course now, nine months later, The Intercept has identified TigerSwan mercenaries and its many subcontractors, along with its relationship to law enforcement while working illegally without a license in North Dakota.  After our post here appeared, it was followed by repeated attacks by former U.S. military, who used their real names as they attempted to defend the mercenaries employed by DAPL. Their Facebook pages are packed with beer, boots and blondes, and of course the weapons they used for killing in Iraq and Afghanistan.
The exposure of mercenaries was one of our last links posted at Twitter:
http://bsnorrell.blogspot.com/2016/09/torchlight-mercenaries-identified.html
While the mercenaries and contractors were picking up their paychecks, and militarized law enforcement were employed for a private oil company, the water protectors of Standing Rock were beaten, gassed, and injured, jailed in dog kennels, and forced to spend time and money on bogus court charges.
While all this ridiculous tweeting is going on by President Trump, women, children and elderly die in bogus wars, and are assassinated by drones due to faulty intelligence. This fact was exposed by Snowden. This fact is now obvious by The Intercept's exposure of TigerSwan's ridiculous security reports at Standing Rock.
The manufactured intelligence and ridiculous security reports are aimed at continued funding for bogus security contractors, and genocidal attacks based on racial profiling, and protecting corporate dollars. Those corporate dollars also fund the U.S. Congressmen who keep mercenaries and killer corporations in contracts and safe from any real exposure.
TigerSwan, Blackwater and others are contracted overseas by the U.S. government.
The result is endless war, torture and the murder of the innocents.
As for the low-brain-wattage president, and his tweets, President Trump knows exactly what he is doing.
It is distraction, and it is a way of rallying bullies and fools.
It is the cause of deadly racial violence and hate crimes in the United States and Trump and Twitter must be held accountable.

Militarized police at Standing Rock attack a Ceremony at Standing Rock, as they clear the camps. The Sacred Pipe is held high, as one water protector attempts to protect it from police, as she was arrested.
(Photo screen capture by Censored News from 'More Than a Pipeline' documentary movie.)
at July 04, 2017

Thanks Alice. It is less cluttered and hope it reduces the problems loading. Google Blogger kept up with new technology earlier, but now it seems that it is not a good fit for both laptop and android use. Thanks for commenting, Brenda