'Racism and the Indigenous World' by Chili Yazzie, Dineh 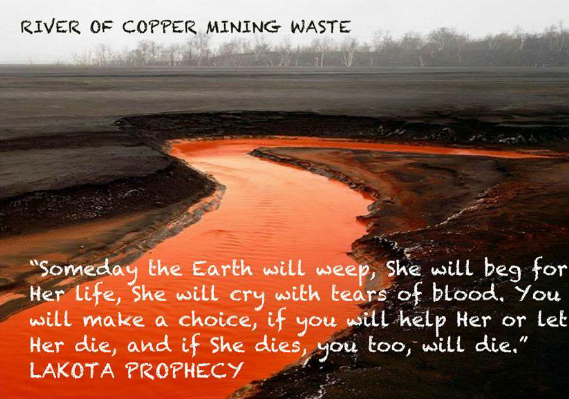 Censored News Series on Racism in America
RACISM AND THE INDIGENOUS WORLD
By Duane 'Chili' Yazzie
Censored News
My supposition is that there was not just one creation but four, a black one, a yellow one, a brown/red one and a white one. Accordingly peoples across the planet have their own creation stories. We were all made by the same Creator and in his benevolence he gave us each a distinct way to live, exemplified by the separate uniqueness of our peoples. So long as people lived in accord with their original virtues and principles, there was happiness and peace.
When Columbus came upon the Indigenous peoples of the western hemisphere he wrote the following to King Ferdinand and Queen Isabella, his benefactors and financiers, “So tractable, so peaceable, are these people, that I swear to your Majesties there is not in the world a better nation. They love their neighbors as themselves and their discourse is ever sweet and gentle, and accompanied with a smile: and though it is true that they are naked, yet their manners are decorous and praiseworthy”. Then he and his successors proceeded to smash the Indigenous world with great deliberateness.
The white race, likewise, would have been given the original gifts of righteousness, humanity, peace and freedom and they probably lived these virtues for many years. So what happened, that a core of them became arrogant, greedy and barbaric? My speculation is that, in the far distant past they were brutishly intruded upon. The vile intruder was none other than Lucifer, the guy who got kicked out of heaven, the guy fell in physical form or spirit form and he had to land somewhere. He fell among the white race and he proceeded to subvert the people, his “host”.
He brainwashed the people to believe that they were superior to all, that the world is theirs and that they had to go out and claim it, regardless of who or what might be in the way. And that they should get filthy rich in the process. The mission was to destroy all that was good and natural in the Creator’s creation. This was Lucifer’s revenge.
Predominately in world history it has been the white race that has ventured out onto unchartered waters to lay claim to all they found. This mission to conquer new lands, exacting annihilation and seeking fortune was sanctified for centuries by an earthly power, the Pope. The Pope has been regarded as the Ruler of the World, he was/is believed by his followers to be endowed with supreme authority by divine right. As the purported Ruler of the World, various Popes throughout history issued Papal Bulls (proclamations). There are at least three such Papal Bulls that ultimately impacted and permanently devastated the world of the Indigenous Peoples.
On June 18, 1452, Pope Nicolas V issued the Dum Diveras which in essence, declared that all pagans were to be conquered and consigned to perpetual servitude.
On January 05, 1455, the same Nicolas V issued the Romanus Ponifex which authorized European dominion over discovered lands and sanctified the seizure of new lands, it encouraged the enslavement of non-Christian people of the world and to claim all their possessions and covert those possessions to the use and profit of the Europeans.
On May 04, 1493, Pope Alexander VI issued the Inter Caetera which granted to Spain, the ownership of all the lands to the West, the Western Hemisphere.
The purposes of the Romanus Ponifex and the Inter Caetera eventually combined to be what we now know as the Doctrine of Discovery. These Papal Bulls and the Doctrine of Discovery provided the authorization, justification and motivation for the capture and subjugation of the Western Hemisphere; the greatest land fraud and largest holocaust in human history.
The premises of white superiority, white supremacy and white privilege are conceived through the conspiracy and intent of these Papal Bulls. The practice of these whiteness paradigms concludes as racism against people of color. The racism of this core group is ingrained, it is in their DNA by now. Racism is like an addiction, a strong addiction, however, as some alcoholics and drug addicts who kick their habits, a racist could also rise above this sickness. If they have the courage of a sober alcoholic.
The premise of american capitalism also has its roots in these Papal Bulls. An implicit cause of racism is capitalism. The wellness of mind and spirit of the capitalist is to have money and the purpose of life therefore, is to get more money. The quest for wealth is a powerful force, a greater addiction than racism. A relentless and unquenchable hunger for riches intertwined with racism is a force nearly unstoppable. This is the main thrust of racism that continues to intrude and destroy the Indigenous world. My conclusion is that so long as there is capitalism there will be racism; they both have the same immoral wicked roots.
Copyright Duane Chili Yazzie, Censored News
at September 07, 2017 1 comment:

Watch interview in Democracy Now! https://www.democracynow.org/2021/8/4/tara_houska_line_3_pipeline_resistance "People were shot in the...