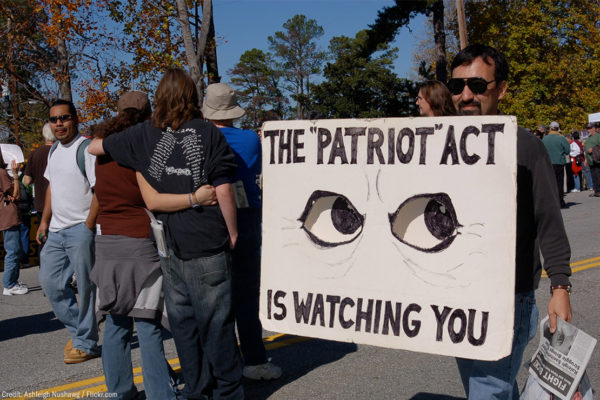 The NSA has repeatedly used these powers to spy on Americans. It’s past time Congress reformed them.
By ACLU
Censored News
Congress today temporarily extended the NSA’s spying powers that time and again have been used to violate our rights. Disturbingly, this three-month extension was snuck into a broader funding bill, forcing members of Congress to choose between extending this program and causing a government shutdown. The extension is an unnecessary lifeline to spying programs that are plagued with compliance violations, have no proven intelligence value, and violate our rights.


Under Section 215 of the Patriot Act, one of the spying powers extended, the government believes it has the right to collect our personal information merely if it is deemed relevant to a terrorism or counterintelligence investigation — a standard much lower than the Fourth Amendment’s probable cause warrant requirement. This can include virtually any business record, including mental health records, DNA information, tax returns, books, videos, call records, financial data, and much more. One of the government’s legal justifications for this power is its false claim that the Fourth Amendment doesn’t protect our information if it is stored or held by a third party such as Google, Facebook, Amazon, a hospital, or an accountant.
This legal argument is not only outdated — it’s absurd.
In today’s digital world, vast amounts of our most intimate data are held by third parties. Telephone carriers can track virtually everywhere we have been. Internet service providers log every website we visit. And tech companies have a record of every text or email we send. The records held by these companies can reveal how often we go to church, seek mental health treatment, or even purchase junk food.
Given this reality — and the NSA’s history of abusing Section 215 — this authority should not be reauthorized unless Congress can enact substantial and meaningful reforms to protect our rights.
Federal lawmakers can start by limiting the types of information that the government can get with a Section 215 order. The government should not be able to obtain sensitive information such as location information, biometrics, or health data under a “relevance” standard, even when that information is held by a third party. Similarly, if the government is generally required to obtain a probable cause warrant for this kind of information in criminal cases, the law should clearly state that they cannot get this information with a Section 215 order.
Second, Congress must beef up protections to ensure that Section 215 does not violate our other constitutional rights. Any surveillance that discriminates on the basis of race, religion, or other protected characteristics should be prohibited, particularly given the ample evidence that national security has often been used as an excuse to target vulnerable communities. Moreover, the existing statute should be strengthened to forbid any surveillance based on First Amendment activities.
Third, Congress can ensure that the government complies with its constitutional obligation to notify individuals when Section 215 information leads to a prosecution or other proceeding. Unlike other surveillance authorities, the government claims that it has no such obligation. Congress should remedy this, giving individuals the opportunity to raise constitutional challenges and judges the ability to review these massive surveillance powers.
Fourth, Congress must end Section 215’s call record authority. In 2015, Congress reformed Section 215 to put a halt to the NSA’s practice of collecting virtually all Americans’ call records. In its place, Congress created a law intended to ensure that this program was used carefully and narrowly, rather than for large-scale collection. It is now apparent that these reforms are not working, and that the NSA’s call record program is not salvageable.
Despite reforms in 2015, the NSA continued to collect an immense amount of Americans’ information under the program — amassing more than 1 billion records from 2016 to 2018 alone. Further, there is no evidence that this mass data collection resulted in the disruption of even one terrorist plot. The NSA has already suspended this program following persistent compliance problems, and Congress should end this authority so that it can never be revived.
Congress had over four years to debate these authorities, and long ago should have either meaningfully reformed them or ended them entirely. Members of Congress should not continue to kick the can down the road. If they cannot pass comprehensive reform in the next three months, they must finally allow these authorities to sunset completely.
In a hearing earlier this month, Senator Mike Lee questioned whether it was a “complete dereliction of duty” for Congress to give these types of expansive surveillance powers to the government.  It was, and it’s past time to remedy this mistake.
at November 24, 2019