The high death rate continues on the Navajo Nation from the coronavirus, with seven deaths reported in the previous 24 hours. The total number of deaths was 422 as of Sunday. An increasing number of Dine' young people are dying from the virus.

Meanwhile, Dine' volunteers continue to raise their own funds and race with food and water to those in quarantine, and Dine' elderly and families in need.


The majority of the $714 million that the Navajo Nation received in federal CARES Act funds remains delayed in the tribal government's budget process and is not reaching the people.

The Navajo Department of Health shows the increase in deaths of Dine young people.

The loss of the Dine' wisdom keepers has been great. 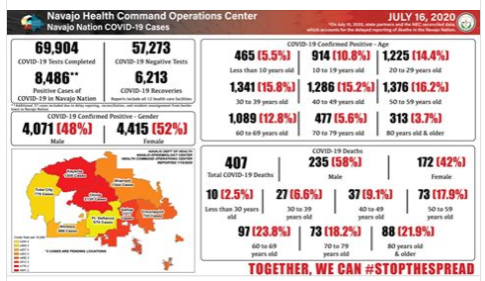 The daily number of new cases of coronavirus have decreased on the Navajo Nation. There are 6,360 recoveries and 25 new cases. The Navajo Nation reached 24 consecutive days with less than 100 cases.

Dine' are desperate for food and water, while more than $600 million in federal relief funds are delayed in the tribal budget process.

It is now the fifth month of the pandemic on the Navajo Nation.

There is no functioning plan in place to deliver food and water to the homes of Dine' in quarantine with the virus and those in quarantine because of contact.

There is no functioning home health care provided for Dine' who are sent home to quarantine. Many are too sick with pneumonia to care for themselves. The virus complications, including weakness, can linger for months.

There are currently more than 2,200 Dine' with active cases of the virus, either in hospitals, nursing homes, or sent home to quarantine.

However, the majority of the funding remains delayed in the tribal budget process and is not reaching the people.

Among those whose relief funding was vetoed was the traditional Dine' healers.

Dine' Hataalii question why they are being denied funding to help relieve pain and suffering in this pandemic after the Navajo President vetoed CARES Act funding to Dine' Hataalii.

They are the Original Health Care System of the Dine' and 'the leaders and caretakers of Dine' traditional and cultural wisdom, ceremony, and herbal healing knowledge.' Read statement.


Regardless of the federal funds received by the tribal government and Indian Health Service, Navajo hospital staff continue to plead for masks and protective gear on social media.

At San Juan College in Farmington, New Mexico, a bordertown to the Navajo Nation, one professor contracted the virus this summer after in-person classes resumed.

The professor taught classes on June 22 and 23 on campus. Students were notified to quarantine for 14 days and to be tested for coronavirus, the Daily Times reports.

The Navajo Nation tribal government remains shut down, except for essential workers.

However, tribal casino workers said they have been told to attend a training session this week to prepare for re-opening. The tribe has not publically announced a reopening date.

Many Navajos fear that re-opening the casinos will result in more sickness and death.

In central Arizona, security guard Robert Washington died after returning to work and contracting the virus at the Gila River O'odham's Lone Butte Casino. Near the border, the Tohono O'odham Desert Diamond Casino at Ajo was temporarily closed after an employee tested positive for coronavirus.

"Navajo casinos need to be closed permanently," said one Navajo, referring to the loss of Dine' incomes from gambling at the Navajo Nation's casinos.

"Families are finally paying off their bills, fixing up their homes, tending to livestock and staying home."

There are between 200,000 and 300,000 Dine' living on the Navajo Nation in 110 chapters located in Arizona, New Mexico and Utah. About one-third do not have running water.

Nationwide, the Indian Health Service shows a sudden increase in coronavirus cases in the Phoenix IHS service area (Arizona, Nevada and Utah) as well as in Oklahoma, the Great Plains, and elsewhere.

The Phoenix area IHS cases have tripled since June.

Alaska and Oklahoma IHS have carried out the most testing.

There has also been a dramatic increase in the Tucson IHS service area, which includes the Tohono O'odham Nation and Pascua Yaqui. 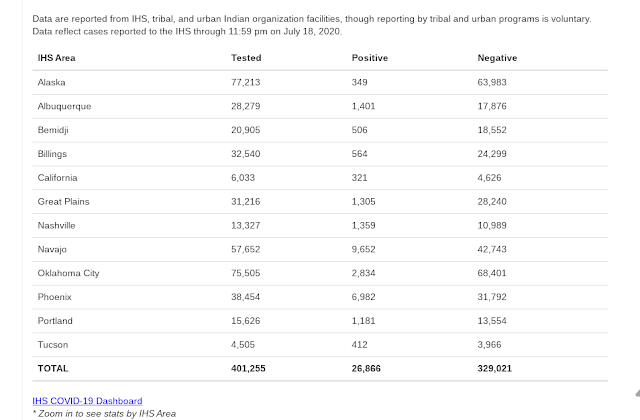 Neither the State of New Mexico nor the Navajo Nation, have responded to Censored News request for the number of coronavirus cases and deaths which includes the name of each nursing home.

A large number of elderly have died in the Farmington and Gallup, N.M., nursing homes, but totals are not being made public.

The border towns in the Four Corners of northwest New Mexico are surrounded by the Navajo Nation, Jicarilla Apache, Zuni Pueblo and Ute in New Mexico, Arizona, Utah and Colorado.

The last totals were given by the state on May 18. Life Care Center of Farmington had 34 deaths, with 84 residents and 35 staff members testing positive.

At that point, 58 people had died at Farmington nursing homes.

In Gallup, as of May 18, eight residents of Red Rocks Care Center had died, along with three at the Little Sisters of the Poor. Sundance Care Home had two deaths.

Although continuous deaths were reported after May 18 at the nursing homes in Farmington and Gallup, the total number of deaths and cases can not be obtained by Censored News.

There has been very little news coverage of the deaths in New Mexico nursing homes, or the sweeping coronavirus spread in southern New Mexico migrant detention facilities and prisons.

New Mexico nursing homes have previously been cited for failed care and neglect.

In Arizona, elderly continue to die in Phoenix and Tucson nursing homes.

Coronavirus is also spreading in the prison complex between Phoenix and Tucson, where private prisons continue to profiteer by imprisoning migrants.