Balance and Respect: Disruption of the Earth and Coronavirus: Dineh Louise Benally on First Voices Radio

Balance and Respect: Disruption of the Earth and Coronavirus: Dineh Louise Benally on First Voices Radio

My elders used to say, 'What is in the Earth is what holds the balance of the Earth. If we dig it all out and destroy it, then it is going to lose its balance ... The moon and the earth are going to lose their balance with each other.' -- Louise Benally, Dine' of Big Mountain.

Louise Benally, Dine' of Big Mountain, shared the messages passed on from her elders on how Mother Earth has been disrupted, speaking today on First Voices Radio with host Tiokasin Ghosthorse, Lakota from Cheyenne River.

Sharing the teaching of her Dine' elders, Louise describes how the minerals in the earth hold the earth in balance. When these minerals -- coal, uranium, oil and gas -- are extracted, there are consequences, she said referring to the coronavirus and what is happening now on the Navajo Nation.

"If so much disruption happens, then things will change for the worse for mankind. We are witnessing this now from this virus, because I do believe it is coming from the poison that is being extracted and produced and constantly being developed in fossil fuels, like oil, coal, uranium, gas, all kinds of minerals are being exposed when they are mined."

"Whatever is in the Earth needs to be left alone because those were lives from before that walked this earth. They got purified and they became a part of the earth."

"If you bring those back and process it to where there is no limit, it will become toxic."

This virus is taking lives and choking people. That is what people are doing to the earth. They are cutting down the rainforests which are the earth's lungs.

"Our elders said these are the lungs of the earth that purifies things."

For 50 years coal was extracted, she said, referring to the coal mining of Peabody Coal on Black Mesa near her home, which fired the Navajo Generating Station on the Navajo Nation.

The coal-fired power plant provided cheap electricity to southern Arizona and the Southwest.

Louise and her family spent the past 50 years resisting relocation at Big Mountain. Tens of thousands of Dine' were relocated to make way for Peabody Coal's mines on Black Mesa.

Louise said now on the Navajo Nation, there is a lot of toxicity in the air, water and land. The politicians don't regulate these poisons they bring out. It is all left exposed on the surface.

When animals and people eat these poisons they ingest it into their systems.

It is the same way with the air, when it is toxified, it builds up things in our systems we can not get rid of.

That is the teaching of the elders. Each nation has its own way of communicating with the earth.

The Heavenly Beings that created this Earth and hold the earth in balance miss its offerings.

"We were told that if we did not go back to respecting it, and keep up our offering, that one day we would not have water anymore, we would not have food anymore. That everything would die. This came as a vision to one of our elders."

In that one season, in 1997, they did an offering. Since that time, she said not much has happened with offerings, prayers and giving thanks for life.

She said people's heads have turned toward making money from extraction. There's non-stop of extraction of oil and of gas, it is covering the Planet. When the sun comes out, all that toxicity hangs in the air, it heats up, it causes nature to change.

Louise said, "How do we go from here, to reverse some of these things, we change or we get swallowed by Nature."

Lakota Host Tiokasin Ghosthorse said toxicity begins within one's self, with our own thoughts. Tiokasin said people are pretending things are going to be OK, without ever cleaning things up, and it  begins on the inside.

Louise said it begins within each person, this reverse assumption and taking that step away from fossil fuels.

She said people are toteing guns around demanding to open public things up again.

"That's how screwed up things are, in the name of this greed."

"They are always wanting more."

"This virus has shut everything down basically and it is only going to get worse if we don't take a few steps back."

The better is the New Green Deal, where everything is alternative. Right now people don't know how to deal with everything that is happening, but it is up to nature.

Louise said we need to look closer to the problems and the solutions: "Stop all these power plants that are burning fossil fuels."

She said the thousands of oil tankers waiting off the coasts, when there is no market for the oil, need to be stopped.

"The greedy people have killed nature. They've killed Native People throughout this continent in the name of greed. I feel like this is nature striking back."

"If they can not see this, I feel like they are a lost cause."

"That is all that really matters and it does not cost money."

"We need to keep going," she said of those connected to Mother Nature.

Tiokasin asked if the earth is more intelligent than man and if mankind has forgotten the teachings.

Louise said today that a very small amount of people believe in the way of the ancestors' teachings.

"The majority of our community has Christianized and totally lost touch with nature. When you try to tell them about nature, or the sacredness of the earth, they turn and walk away and tell you that you are a lost cause."

"That attitude does not help."

This executive in Washington, she said, "They are like Zombies. No confidence whatsoever. They are paddling along, wanting more. So many people are dying, so many people are ill. It needs to take a turn somehow."

Louise said the system is not a good system, it is based on consumption and capitalism, that is not how our structures are set up in our own cultures.

"Native people are in prison and some of the people are killed in the line of protecting. It is totally a chaotic time."

They always call us the needies -- but they are the real needies.

"They have to destroy something, kill it and eat it, to feel good about themselves based on that. That's not right."

Tiokasin said more than 40 years ago, coal was extracted at Black Mesa and depleted the water, land and air to provide Los Angeles and the Southwest with electricity.

"We only think about the people suffering," Tiokasin said.

Tiokasin asked if we have forgotten how the animals, birds, water and the land suffer from this greed. He said Native People have been saying this since 1492.

Louise said, "We are not respected or honored by the colonial world of society."

"If we are not understood, our Mother will get her arms up and start defending herself."

Mother Earth is aware that there have always been Indigenous Peoples that live in harmony with Nature. That is not understood by the consumption world.

"They want more and more all the time."

"We don't have a choice but to talk to the Earth, to the Father Sun, and the Universe, that is our Law. It is higher than all those laws that are being applied to us."

Louise said the virus is bringing changes and things are being brought back to balance.

The air quality was so bad in China when the virus began. "It was black and now it is clear." The ozone hole in the Arctic was open and now it is closed again. A lot of these things are being brought back in balance.

"For me, that is the proof we are seeing."

"The next thing that needs to go is the automobile industry, because there are so many cars in this country, in this world."

"Maybe people need to stay home, plant their food and live in peace, without having to be driving this way and that way, with more oil and gas being pumped."

"My elders used to say, 'What is in the Earth is what holds the balance of the Earth."

"If we dig it all out and destroy it, then it is going to lose its balance, and there is going to be consequences."

"The worst one my mother used to say, 'The moon and the earth is going to lose its balance, with each other."

The earth's minerals hold the moon in balance.

She said if we extract all that, then it will lose the balance and that's what regulates the earth.

This regulation can be compared to women who are the regulators, because the woman is the life-giver.

She said the focus of the colonizers' education is money and has consequences. The younger people have to be educated.

"We have to continue to communicate, that's what matters."

"Stay home, wash your hands, do not interact with crowds, and everything will be OK."

Tiokasin said the past is always in us and holds the answers.

"You were prepared for this," he said, urging listeners not to succumb to darkness.

"We need to use that intelligence." 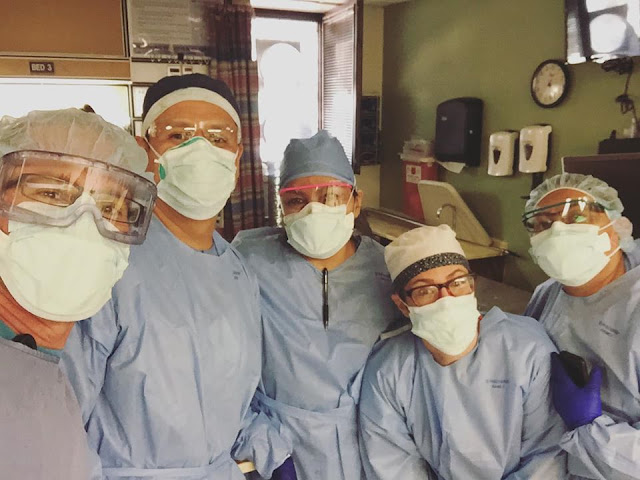 The Navajo Nation receives coronavirus funds after filing a federal lawsuit to halt the U.S. from its funding scam to Interior Secretary's former employers

WINDOW ROCK, Ariz. -- There were six more Navajo deaths and 95 new cases of coronavirus in the past 24 hours. There are now 2,654 cases and 85 deaths on the Navajo Nation.

On Wednesday, the Navajo Nation received a portion of its coronavirus CARES Act funding after filing a lawsuit against the U.S. government.

The Navajo Nation and 10 other tribes filed suit to halt the U.S. government from giving the allocated $8 billion for Indian tribes to Alaska Native corporations, which are owned by shareholders which include non-Indians, and hold federal government contracts with ICE and detention centers, and contracts for work on energy projects and pipelines.

“The funding we received represents only a portion of the CARES Act allocation, approximately 60-percent according to the federal government. We are in the process of carefully reviewing the guidelines and provisions from the Department of the Treasury," President Nez said.