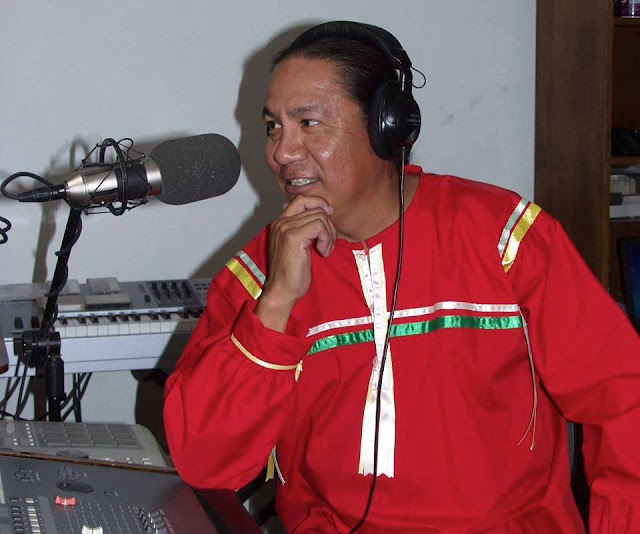 STATEMENT FROM THE FAMILY OF HARLAN MCKOSATO

“This morning our dearly beloved Harlan began his journey back to Wakanda where he was surrounded by his family and friends at his home in Albuquerque. He is survived by his son Nekon Che McKosato, his brother Kenneth Robert McKosato, his sister Deanna Lynn McKosato, and sister Shelley Magdalene McKosato-Haupt.

Harlan was an icon in Indian Country for his award-winning contributions to world news outlets. He possessed a unique storytelling ability that enabled him to report on any subject in profound ways. Through his interviews on radio, TV, in newspapers and social media, he shared his great gift of intelligence, wit, and kindness. Harlan had communicated with his heart to personally connect with audiences and had educated many on a vast number of Tribal issues. He paved the way for many young Native people to join him in the field of communications.

We extend our utmost appreciation to family and friends for visiting and helping Harlan in recent weeks. We are deeply grateful for the items provided for his Sac and Fox traditional ceremony. We are comforted by the outpouring of support during this difficult time.

Please pray for Harlan’s family as they prepare him for his journey to be with Keshamanitou. May he have a peaceful journey home.”
at July 22, 2020 No comments: 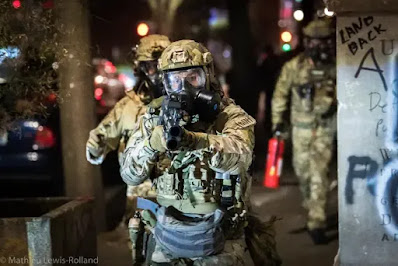 Federal agents point their weapons at photographer Mathieu Lewis-Roland,
who was unarmed, on July 20 in Portland, Oregon.
Trump sending federal agents to Albuquerque

Albuquerque -- Targeting a city that is battling the spread of the coronavirus, Trump announced Wednesday that he is sending federal agents to Albuquerque. This comes as federal agents in Portland, including US Border Patrol agents, continue to beat and gas protesters and the moms and dads who have joined the frontlines.

Trump said today that 35 federal agents and resources are coming to Albuquerque -- as part of Operation Legend that targets a handful of cities across the United States.

"Trump said the influx will be in cities where the leadership wants to 'defund, defame or abolish' police," Albuquerque Journal reports.

"Using the same alarmist language he has employed to describe illegal immigration, Trump painted Democrat-led cities as out of control and lashed out at the 'radical left,' which he blamed for rising violence in some cities, even though criminal justice experts say it defies easy explanation," AP News reports.

In breaking news, Reuters reports that documents in the lawsuit filed by journalists against federal agents in Portland reveal the operation involves the Department of Homeland Security’s Rapid Deployment Force.

There are currently 114 federal officers in Portland, including personnel from the Federal Protective Service. FPS contracts private security companies to guard fixed posts. There are also agents of Immigration and Customs Enforcement, U.S. Marshals Service and U.S. Customs and Border Protection.

The documents say the U.S. Department of Homeland Security deployed the agents on a mission named Operation Diligent Valor.

The mayor of Portland, Oregon, was tear-gassed by the U.S. government late Wednesday as he stood at a fence guarding a federal courthouse, Associated Press reports.

Mayor Ted Wheeler said it was the "first time he’d been tear-gassed and appeared slightly dazed and coughed as he put on a pair of goggles someone handed him. He didn’t leave his spot at the front, however, and continued to take gas. Around Wheeler, the protest raged, with demonstrators lighting a large fire in the space between the fence and the Mark O. Hatfield Federal Courthouse and the pop-pop-pop of federal agents deploying tear gas and stun grenades into the crowd."

The U.S. Border Patrol agents in Portland are from the southwest border.

After agents in Portland were doxed, Homeland Security responded, reports NTD. "The Border Patrol and ICE officers deployed in Portland wear camouflage uniforms because they have been called from regular duty on the southwest border, where the uniforms are their daily attire, according to Chad Wolf, the acting head of the Department of Homeland Security (DHS). The uniforms have prompted some left-wing pundits to refer to the officers as “storm troopers” and “gestapo.” Wolf dismissed the allegations as “smear attacks” and “disgusting.” Read more.

The WPLC said that in light of today's local news, Trump deploying federal officers to Albuquerque, New Mexico, there is legal support.

"The National Lawyers Guild (NLG) National Office is launching a hotline for activists and lawyers to report incidents of federal repression, such as FBI “door-knocks” at activists’ homes, grand jury investigations and subpoenas, and any other federal law enforcement efforts to undermine civil rights, including federal grab squads and the use of unidentified federal agents to police protests. The line is live at: 212-679-2811.

Since May, the NLG has continued to support the movement for Black lives, organizing to support legal defense efforts and provide Legal Observers for demonstrations. In the last week, we have seen the use of anti-protest shock troops by the federal government, such as Portland, where federal grab squads have arrested activists and taken them away from demonstrations in unmarked vans.

A memorandum from the Department of Homeland Security (DHS) suggests that these officers are acting under the auspices of DHS and are members of the Border Patrol Tactical Unit (BORTAC). This is a unit typically tasked with high-level law enforcement operations and it is formed under US Customs and Border Patrol (CBP). These officers are acting under direct orders from the Trump Administration and Acting DHS Secretary Chad Wolf.

The use of BORTAC to disrupt activism is a recent escalation by the federal government, which has also used the National Guard, FBI, and Secret Service in order to violently quell protests. These efforts come in combination with an aggressive political and legal strategy labeling ‘antifa’ a domestic terrorist organization. Federal prosecutors are also filing criminal charges against activists throughout the country.

The NLG Federal Defense Hotline will allow callers to have privileged conversations with attorneys, and to receive attorney referrals, know-your-rights information, and resources for responding to grand jury investigations and subpoenas. Inquiries about the line can be sent to massdef@nlg.org. The line is staffed by attorneys organizing with the NLG, and will remain active as long as federal prosecution efforts continue.

The National Lawyers Guild, whose membership includes lawyers, legal workers, jailhouse lawyers, and law students, was formed in 1937 as the United States’ first racially-integrated bar association to advocate for the protection of constitutional, human and civil rights."

"Heinrich calls for the resignation of Bernalillo County sheriff"

“It’s tremendously disturbing that President Trump is considering occupying New Mexico’s largest city by sending federal troops into Albuquerque just over 100 days before the General Election. Any federal troop presence in New Mexico will have an intimidating effect on our citizens and disrupt the free exercise of their democratic rights," Oliver said.

"We’ve already seen the secret abductions of citizens by these troops in Portland and New Mexicans have no assurance that such unlawful actions would not occur in Albuquerque. The right to the free and fair functioning of our democracy cannot and will not be set aside in New Mexico for a Washington political stunt, or worse, a takeover of state and local democratic processes."

"We do not live in a country where voters need to fear going out on Election Day to exercise their right to vote. As Secretary of State, I will continue to advocate for New Mexicans to be able to cast their ballot in November without obstruction or intimidation," Oliver said.

This is a breaking news story, please check back for updates.
at July 22, 2020 No comments: 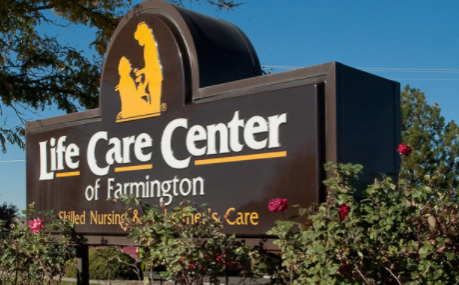 FARMINGTON, N.M. -- Coronavirus has claimed the lives of 79 people at two nursing homes in Farmington, as the virus spread at an alarming rate, infecting both residents and staff.

Even before the pandemic, New Mexico was tied with Arkansas for the highest rate of serious deficiencies in nursing homes in the country, the type of deficiencies that lead to the rampant spread of infectious diseases.

Listen now online to Tiokasin Ghosthorse, Lakota, and this week's radio show. It begins with Philmer Bluehouse, Dine', speaking on the paradigm shift needed during this time of pandemic, and how the narratives, songs and prayers are needed for peace and healing.
https://firstvoicesindigenousradio.org/program/20200723

Philmer Bluehouse (Diné) developed the Peacemaker Court system in the Navajo Judiciary. Philmer also worked in the criminal justice system and has a number of writings available online.

T. Lulani Arquette is the President and CEO of the #NativeArtsAndCultureFoundation (NACF), a national organization dedicated to advancing equity and Native knowledge with a focus on arts and cultural expression that helps strengthen American Indian, Alaska Native and Native Hawaiian artists and communities. With offices in the Pacific Northwest, the foundation provides support to Native artists, tribal organizations, and communities across the nation.

Lulani, a theatre performing artist with degrees in Political Science and Drama and Theatre, brings more than 25 years of professional experience steering organizations to their highest creativity and potential, advocating for cultural perpetuation and social change, and catalyzing change in communities. Lulani’s current work is especially focused on how we attend to cultural equity, social justice, leadership, and the environment to build a more compassionate and just nation.

Andrew Miller brings two decades of human rights activism and international field experience to his work as #AmazonWatch's Washington, D.C. Advocacy Director. Since 2007, Andrew has collaborated closely with Indigenous partners from Brazil, Colombia, Ecuador and Peru, facilitating rights-based advocacy at Washington DC-based institutions such as the U.S. Congress and executive offices, multilateral banks, and the Inter-American Commission on Human Rights. He has also supported Indigenous-led campaigns to expel international oil companies such as Talisman Energy and GeoPark from Amazonian Indigenous territories. For more information, visit www.amazonwatch.org.