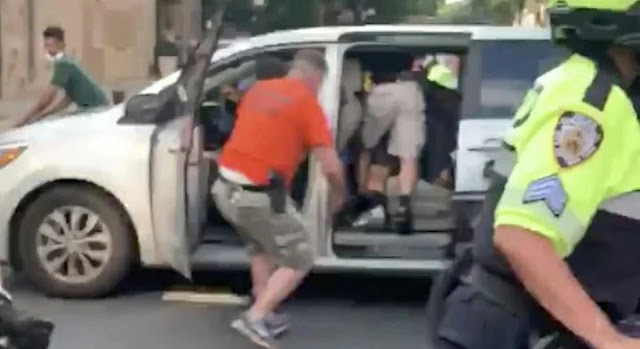 New York police abducted a skateboarder on Tuesday, throwing her into an unmarked van, as shown in video posted online.

The Washington Post reports, "When an unmarked Kia minivan screeched to a stop near protesters marching in Manhattan on Tuesday evening, the demonstrators’ surprise swiftly gave way to alarm. Several New York Police Department officers wearing T-shirts and shorts spilled out of the van and grabbed one of the protesters, dragging her toward the vehicle, according to videos filmed by bystanders."

"The videos of the chaotic scene, which bore a marked similarity to the controversial tactics used by federal officers to detain demonstrators in Portland, Ore., quickly went viral. Protesters who witnessed the incident described it as a 'kidnapping,' while a number of New York’s elected officials, including Rep. Alexandria Ocasio-Cortez (D-N.Y.), decried the officers’ actions and demanded further explanations from the NYPD, reports Allyson Chiu in the Washington Post

“Our civil liberties are on the brink. This is not a drill,” Ocasio-Cortez tweeted. “There is no excuse for snatching women off the street and throwing them into unmarked vans.”

Nikki Stone, 18, who has also been referred to online as Nicki, was abducted. Police said Stone is facing charges of criminal mischief related to five incidents.

Clara Kraebber, a 20-year-old Oxford student, told Gothamist, “We literally turned the corner and were met with a line of police who attacked us without warning.”

Kraebber said officers pepper-sprayed the group “seemingly at random” during the arrest, adding, “They were trying to make it painful to be there.”

Another witness told Gothamist that the protesters had been “skateboarding and eating pizza” before the van’s unexpected arrival.

“We didn’t see where they came from,” the witness said. “All of a sudden they grabbed Nicki. It was like a kidnapping.”

In one clip, a group of protesters, some of whom are riding bikes and skateboards, are making their way down the street before the camera pans to one of the officers roughly grabbing Stone several feet away from the van.

As a handful of protesters approach, an officer repeatedly shouts, “Get back!” and charges on foot at those getting too close.

Within seconds, more police flood the area, using their bicycles to create a barrier between the van, where the officers are still struggling with Stone, and the crowd.

As the pandemic continues in the fifth month on the Navajo Nation, there were five more Dine' deaths from the virus reported on Sunday.

Philmer Bluehouse, Dine', speaking with Tiokasin Ghosthorse, Lakota, on First Voices radio, said the paradigm shift needed for peace and healing during this time of pandemic is in the Dine' narratives, songs and prayers.

"We must use our sacred knowledge to deal with it," Bluehouse said of the virus, describing it as a monster. "It has its limitations," he said, describing how Dine' were given instructions on how to deal with danger.

"It has to do with self, and how to overcome." He said the answers are within, and ceremonies open the realm of the portal to the sacred.

"It is important as to who we are as a people."

Across Indian Country, the virus rate continued to increase rapidly in the Phoenix and Oklahoma City IHS service units. The Phoenix IHS includes Arizona, Nevada and Utah. Although the Navajo IHS is the largest service unit, Oklahoma and Alaska have carried out more COVID-19 testing. 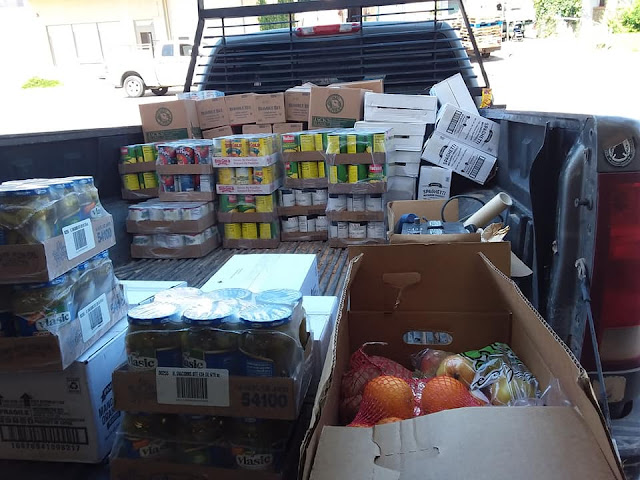 (Photo above and below.) Mercury Bitsuie, who volunteers and raises his own funds said, "Teamed up with our AIM Dine' Territory brother Christian J. Johnson to deliver some supplies in the Mitten Rock areas in New Mexico. Was a good drive! Thank you Kirbi Foster and your crew in Cortez as well as my Uncle Andy Dann for coming out and giving us a hand. You all have a wonderful day!" Contact him on Facebook at https://www.facebook.com/dinelandnwater/

Meanwhile, on the Navajo Nation, there is a continued need for food, water and cleaning supplies as the virus continues to spread and the weekend lockdowns continue, especially for the sick, elderly, families with young children, and those without transportation and running water.

While more than $600 million in federal CARES Act relief funds remain stalled in Navajo tribal government appropriations, Dine' volunteers continue to deliver to the homes of those most in need.

The largest Navajo chapter houses located in New Mexico either have been closed or have limited hours, resulting in pleas on social media for help.

Dine' volunteers and Dine' organizations continue to raise their own funds and deliver food and water to homes and communities. More than one-third of Navajos have no running water. Between 200,000 and 300,000 Navajos live in 110 chapters on the Navajo Nation in Arizona, New Mexico and Utah.

Nationwide, more than 150 health experts and medical professionals are urging leaders to shut down the United States again as many states see spikes in cases. In an open letter posted on the U.S. Public Interest Research Group’s website, healthcare experts and professionals ask U.S. leaders to consider closing and restarting the economy once again. 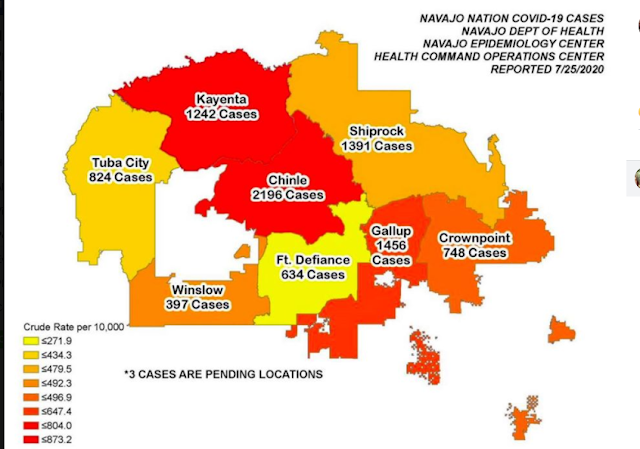 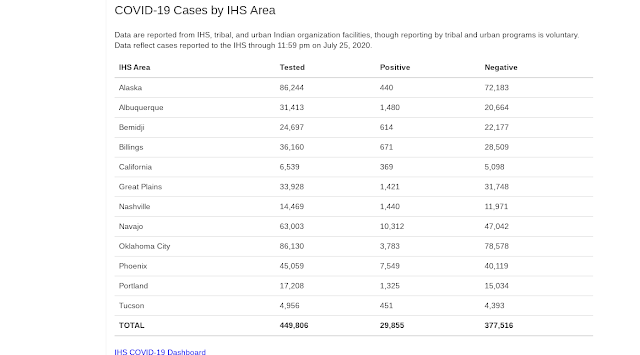