The Truth about War: The War Machine and Censorship in Indian Country

The Truth about War: The War Machine and Censorship in Indian Country

The War Racket.' Buffy's strong words for the corporate war profiteers: The Parasites.

At Dine' College, Buffy said she was blacklisted out of the music industry in the U.S. by President Lyndon Johnson, because of her stance against the Vietnam War and her song, 'Universal Soldier." Her words to us, backstage at Dine' College in 1999, were censored by Indian County Today, where I was a staff reporter, and is one of the reasons Censored News was created.

Buffy Sainte Marie, and Louise Benally of Big Mountain, were both censored by Indian Country Today. As the U.S. bombed Baghdad, Louise compared the war in Iraq to the genocidal Longest Walk that her ancestors were forced on to Fort Sumner, Bosque Redondo.

Zapatistas: 'Stop the Repression Against the Indigenous Peoples in Mexico' 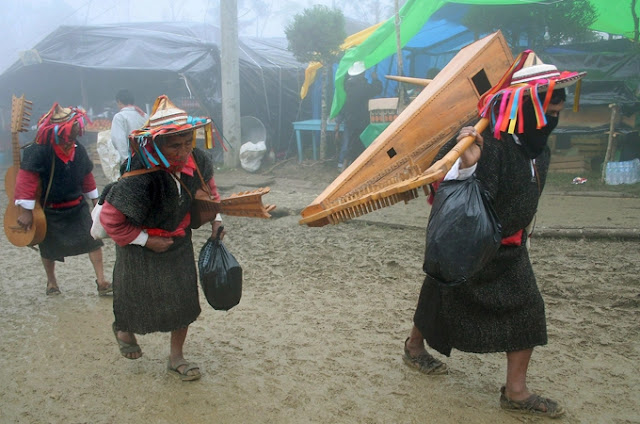 Throughout Mexico, the corporations and cartels, aided by the Mexican military, bolstered by U.S. dollars and weapons, seek to seize the land and water of Indigenous People, the guardians of the land.

STOP THE REPRESSION AGAINST THE INDIGENOUS PEOPLES IN MEXICO

To the people of Mexico,

To the peoples of the world,

To the Sixth National and International,

We denounce that on February 15 at around 1:20 a.m., the repressive forces of the bad government, made up of members of the National Guard, the state police of Puebla and the municipal police of Juan C. Bonilla, invaded and dismantled the spaces of resistance and organization of the Casa de los Pueblos Altepelmecalli, an autonomous cultural and political space that until March 22, 2021 was the physical plant of the Bonafont company, a transnational company that has stolen and overexploited the aquifers of the Cholulteca region for years.
Read more »
at March 08, 2022 No comments: