Border Patrol: A Culture of Cruelty

TUCSON -- The Tucson-based humanitarian organization No More Deaths released a new report on Wednesday, "A Culture of Cruelty: Abuse and Impunity in Short-Term US Border Patrol Custody," documenting rampant abuse by the US Border Patrol.

The report reveals that US Border Patrol agents are out of control and acting with impunity. The documented abuse describes Border Patrol agents beating children and adults and repeatedly denying medical treatment. Further, migrants suffering in the desert were denied water in the Sonoran Desert, where temperatures can reach over 112 degrees.

"Many of them plainly meet the definition of torture under international law," the report says of the abuse.

Unsafe detention practices and the physical, emotional and psychological abuse of detainees are described in the report. No More Deaths and partner organizations interviewed nearly 13,000 for 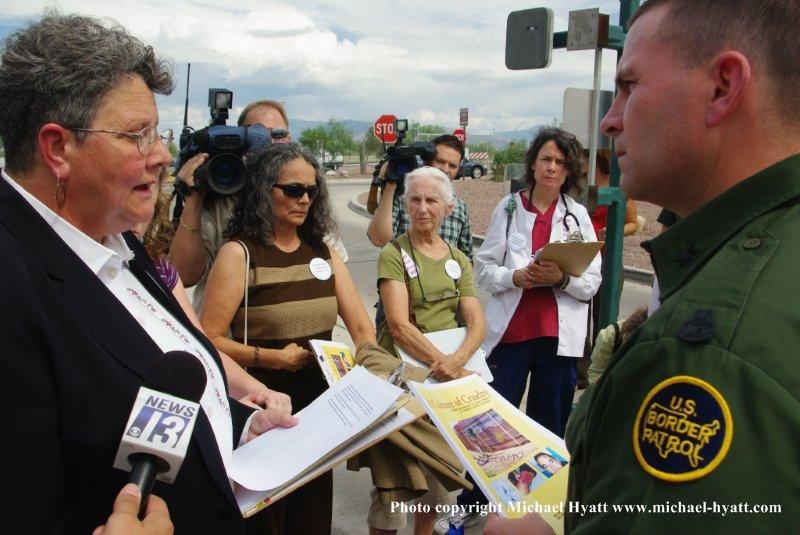 mer detainees to compile the report over the past two years. Many of those walking are Indigenous Peoples, walking to survive as their homelands are seized by corporations or drug cartels.

Following a press conference on Wednesday, Sept. 21, an oversight committee of professionals -- including a social worker, nurse, doctor, clergy and humanitarian aid representatives -- went to the US Border Patrol Headquarters in Tucson and delivered the report. When entrance gates to the Border Patrol were closed and locked, protesters stood with banners and chanted, "End the abuse now!" at the locked gates.

The protest at the US Border Patrol Headquarters was at the entrance to Davis Monthan Airforce Base, where Tucson police soon arrived. Later, a representative of the Border Patrol came out to the street and accepted the report from the oversight committee of professionals.

"It was a good day!" said Isabelle Garcia of Derechos Humanos, among the humanitarian groups based in Tucson, joining No More Deaths to deliver the report.

No More Deaths, founded in 2003, provides humanitarian aid in the desert, including food and water to those dying in the Sonoran Desert. No More Deaths has provided training for thousands of volunteers to provide aid to migrants at desert camps and border aid stations. Volunteers search the desert for those in distress, in an effort to save lives in the desert.

Danielle Alvarado, No More Deaths volunteer, said of the new report, "What we've found is clearly not the result of a few 'bad apples.' We continue to hear the same stories from thousands of people, released from different Border Patrol stations, year after year. They are alarmingly consistent."

Jorge, 27, from Guatemala, said six Border Patrol agents, including some on motorcycles and horses, surrounded his group of ten people. He was thrown to the ground face-forward and an agent hit him with the butt of a gun. Agents yelled insulting names at them. Jorge was held for three days in the Tuscon processing center. When he asked to see a doctor, he was repeatedly refused. Over three days their requests for food was denied and they were only given small packets of crackers. His belongings were not returned, including his birth certificate and $100 in cash.

Angelica from Mexico was apprehended trying to reach her son in Oregon. While in custody in Yuma, Arizona, agents threw away her medicine. "Border Patrol agents kicked Angelica in the stomach and denied her medical attention." When she was interviewed, she had persistent pain the abdomen.

One mother of three children lived in the US for 17 years then returned to Mexico for the funeral of her parents. When she returned to Nogales, Arizona, she was apprehended. Guards laughed at her for "being Mexican." "They had her strip naked; then they took her clothes and touched her breasts in the presence of both male and female guards." Her belongings were taken and not returned, including her $20. She was given papers to sign in English, without translation, and deported.

A sixteen-year-old from Guatemala was thrown to the ground and kicked in the knee by a Border Patrol agent. Agents took his $20 and hit him in the head with a flashlight. As he recounted what was done to him, he asked why they had beaten him. "They didn't understand me and treated me like a dog." Border Patrol agents made fun of him, saying he was like a "toy." The agents taunted him, asking him if he wanted food or water, and then denied him food and water. During three days in custody, he was finally given a juice box and some crackers.

Ricardo, 33, from Michoacan, Mexico, lived in the US for 14 years with his wife and two children. When his mother's leg was amputated, he returned to Mexico. "Ricardo was taken hostage by the Zeta cartel, which beat and abused him for 15 days." His brother helped pay the ransom of $800. He then spent five days in the desert suffering from dehydration and exhaustion. He surrendered to the Border Patrol and told agents in Tucson that he was seeking asylum, because if he returned to Mexico, the Zetas would kill him. He also said he needed to return to his family in the US. The agent responded, "If you do not return to Mexico, we're going to kill you here." The agent said, "The illegals here don't have any rights. Here you are nothing." Ricardo was cuffed on the knees and physically abused by agents before being deported.

The report, "A Culture of Cruelty," was released Wednesday as a culture of crime is being exposed, including the ATF's Project Gunrunner, which put assault weapons in the hands of drug cartels. This week, the El Paso Times revealed FBI whistleblowers exposing US law enforcement working with drug cartels along the border in El Paso and New Mexico. Further, the US Border Patrol has revealed that Border Patrol agents have been arrested for crimes involving corruption, which includes taking bribes and giving information to criminals. At the same time, private prisons continue profiteering from the xenophobia of migrants and people of color at the US/Mexico border.

Increasingly on the Arizona border and on Tohono O'odham land, the migrants walking and dying are Indigenous women, walking with their children, including Mayans from Chiapas, Oaxaca, Guatemala and elsewhere in Central and South America.

Although Border Patrol agents are being charged with crimes of corruption, agents continue to abuse migrants with impunity.

Testifying before the Senate Homeland Security and Government Affairs Subcommittee on Disaster Recovery and Intergovernmental Affairs in 2011, Alan Bersin, commissioner of the Customs and Border Patrol, said: “Since 2004 in October, 127 CBP personnel have been arrested, charged or convicted of corruption. Of the 127 arrests, 95 are considered mission compromising acts of corruption. This means that the employee’s illegal activities were for personal gain and violated, or facilitated the violation of, the laws CBP personnel are charged with enforcing.”

Customs and Border Patrol is a component of the Department of Homeland Security. CBP employs about 60,000 people, 40,000 of which work at the U.S. borders.

"Customs and Border Patrol is a component of the Department of Homeland Security. CBP employs about 60,000 people, 40,000 of which work at the U.S. borders."

It is probable that a large majority of those 40,000 employees of the DHS CBP at the borders are enforcers - individuals quite willing to initiate the physical force that government is dependent on to make all those thousands of words of border and customs related regulations more than just the paper they're written on. The legislator, executives (including the President), judges and bureaucrats do NOT get out and enforce those laws/regulations/edicts/mandates/etc - they have enforcers to do that dirty work. Not robots, but real human beings who initate the physical harm to others. These enforcers are key to everything a government does (including making wars), everything a politician threatens and/or offers in legislation or backrooms.

Think that people ought to be able to travel to locations where they are welcome by the residents/owners? Think that the government is interfering in the mutually voluntary interactions of individuals by prohibiting movement across a government defined line/border? Don't like the way border guards (thugs?) are treating fellow human beings?

I urge those who find government enforcement "work" abhorrent and/or long range counterproductive to a voluntary society, to attempt to persuade by way of reasoned logic those enforcers they actually know in some manner to get truly productive jobs or start a business (offering to assist them). For those who instead continue on as enforcers, the logical step is to withdraw all voluntary association with them - no sales, service or camaraderie - no anything!

I've pointed out many times on the Internet that shunning, with a long history of use as a method of social persuasion, has not been given its due in mainstream media. It is included by Gene Sharp in his 198 Methods of NonViolent Action - part of Ostracism of Persons under THE METHODS OF SOCIAL NONCOOPERATION: http://www.aeinstein.org/organizations103a.html
Also, "Tax/Regulation Protests are Not Enough: Relationship of Self-Responsibility and Social Order": http://selfsip.org/focus/protestsnotenough.html
A more foundational explanation is at: http://selfsip.org/solutions/Social_Preferencing.html

To those who cry out that these "poor border guards have no choice because there are no other jobs", I remind them that the government's domestic enforcers are key to making all the volumes of regulations at all levels that interfere in mutually voluntary transactions more than just the paper they are written on; these transactions include providing and obtaining jobs and starting businesses,

Don't be tolerant of your neighbors, friends, family, associates and strangers who are enforcers. Be part of the solution! Be discriminating, in the finest sense of the word. Associate only with those who produce value and withdraw association from those who prevent value from being exchanged, destroy value that exists and prevent more value from even coming into being.