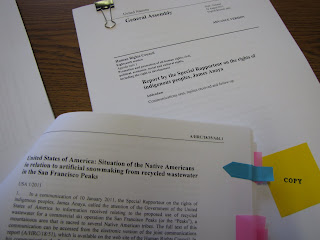 NNHRC passes legislation to request US

ST. MICHAELS, Ariz.—The Navajo Nation Human Rights Commission urges the Navajo Nation Council to formally request the U.S. President to suspend the permit authorizing the use of reclaimed water on Dook’o’osliid [San Francisco Peaks], the sacred mountain to the west marking the traditional boundary of the Navajo people—the Diné.

“The Navajo people is a part of the world community and the world community has set standards for a good reason,” said Leonard Gorman for the Navajo Nation Human Rights Commission and continued, “The United States must be responsible and abide by international standards that protect the human rights of Navajos.”

The NNHRC resolution passed 4 in favor, 0 opposed on September 2, 2011, and will be presented to the Navajo Nation Council at a date to be determined. It is titled, “Acknowledging the Report by the United Nations Special Rapporteur on the Rights of Indigenous Peoples, S. James Anaya, and Recommending that the Navajo Nation Council to Formally Request the President of the United States of America to Direct the U.S. Forest Service to Suspend the Permit authorizing the use of Reclaimed Waste Water to make Artificial Snow and follow the Recommendations of the Special Rapporteur; and other recommendations” and indicates the timeline between the NNHRC and Anaya formal correspondences. (To view the report, visit www.nnhrc.navajo-nsn.gov.)

On May 17, 2010, based on the recommendations of the Commission, the Intergovernmental Relations committee of the Navajo Nation Council authorized the submission of a complaint to Professor S. James Anaya, Special Rapporteur, and requested that Special Rapporteur carry out his mandates to protect the human rights of Navajos and other indigenous peoples as they pertain to their religious beliefs that the San Francisco Peaks is a sacred sites; and

On August 22, 2011, Professor S. James Anaya, Special Rapporteur, issued his report entitled Report by the Special Rapporteur on the Rights of Indigenous Peoples, Rep. of Human Rights Council, 18th Sess., Aug. 22, 2011, U.N. Doc. A/HRC/18/35/Add.1; UN.GAOR, 65th Sess., (Sept. 14, 2011)., detailing that the United States did not respond to calling attention to information he received “relating to the proposed use of recycled wastewater for the commercial ski operation [on] the San Francisco Peaks, a mountainous area that is sacred to several Native American tribes.”

From the onset, it took about 15 months for a response, but that response came with three recommendations from the U.N. representative to the United States.

The three recommendations were:

“On the basis of the foregoing, the Special Rapporteur respectfully recommends that the United States Government engage in a comprehensive review of its relevant policies and actions to ensure that they are in compliance with international standards in relations to the San Francisco Peaks and other Native American sacred sites, and that it take appropriate remedial action.

In this connection, the [United States] Government should reinitiate or continue consultations with the tribes whose religions practices are affected by the ski operations on the San Francisco Peaks and endeavor to reach agreement with them on the development of the ski area. The [United States] Government should give serious consideration to suspending the permit for the modification of Snowbowl until such agreement can be achieved or until, in the absence of such an agreement, a written determination is made by a competent government authority that the final decision about the ski area modifications is in accordance with the United States’ international human rights obligations.”

“The Special Rapporteur wishes to stress the need to ensure that actions or decision by [the United States] Government agencies are in accordance with, not just domestic law, but also international standards that protect the right of Native American to practice and maintain their religious traditions. The Special Rapporteur is aware of existing government programs and policies to consult with indigenous peoples and take account their religious traditions in government decision-making with respect to sacred sites. The Special Rapporteur urges the
[United States] Government to build on these programs and policies to conform to international standards and by doing so to establish a good practice and become a world leader that it can in protecting the rights of indigenous peoples.

Anaya stated, “Under the cited human rights treaties, to which the United States is a party, and the Declaration on the Rights of Indigenous Peoples, which the United States has endorsed, consultations should take place with the objective of achieving agreement or consent by indigenous peoples to decisions that may directly affect them in significant ways, such as decisions affecting their sacred sites.”

Moreover, Anaya said, “Simply providing indigenous peoples with information about a proposed decision and gathering and taking into account their points of view is not sufficient in this context. Consultation must occur through procedures of dialogue aimed at arriving at a consensus.”

Otherwise, Anaya stated, “In the absence of consent by indigenous peoples to decisions that affect them, States should act with great caution. At a minimum, States should ensure that any such decision does not infringe indigenous peoples’ internationally-protected collective or individual rights, including the right to maintain and practice religion in relation to sacred sites.

Anaya continued and stated, “The religious freedom at stake is not simply about maintaining ceremonial or medicinal plants free from adverse physical environmental conditions or about physical access to shrines within the Peaks. More comprehensively, it is about the integrity of entire religious belief systems and the critical place of the Peaks and its myriad qualities within those belief systems.”

Gorman said, “Anaya’s report supports the need to not only elevate the fundamental religious rights into the international arena but importantly the necessity to ensure that United States carries out its commitments to human rights based on binding international treaties.  This is a comprehensive approach to protect Dook’o’osliid.”

Anaya is one of few international representatives on human rights who said in his report, “It is highly questionable that the effects on Native American religion can be justified under a reasonable assessment of necessity and proportionality, if the purpose behind the Government decision to permit the enhancements to the ski operation is none other than to promote recreation.”

"Indigenous peoples have the right to self-determination. By virtue of that right they freely determine their political status and freely pursue their economic, social and cultural development," according to the Article 3 of the U.N. Declaration on the Rights of Indigenous Peoples.