US Weapon of Choice: Disregard for border lives

Images from the ATF's "Project Gunrunner Weapons of Choice," circulated in 2008 by Arizona police. The photos show three of the weapons that the US allowed to "walk" to Mexico's drug cartels.

SASABE, Ariz. -- A systematic disregard for human life of those living on the border of the United States and Mexico is revealed in the US diplomatic cables, exposed by Wikileaks, and the Arizona police files, exposed by Lulzsec.
Arizona police documented white supremacists and drug cartels on the border and never informed US or Mexican residents of threats to their lives from weapons, explosives and in one case, a drug cartel kingpin at a ranch near the Arizona border.
Meanwhile, although President Obama and Homeland Security Secretary Janet Napolitano deny knowledge of the ATF's Project Gunrunner -- which put assault weapons in the hands of drug cartels -- an Arizona police officer's e-mail reveals the information was circulated as early as 2008.

'Smoking gun' An Arizona police officer's 2008 e-mail
A police officer in Flagstaff, Arizona, circulated an e-mail about Project Gunrunner in 2008. The e-mail was sent to individuals in the Department of Homeland Security and soldiers in the army and navy. The e-mail includes a brochure titled, "Project Gunrunner: Weapons of Choice," and includes two dozen photos of the pistols and assault weapons selected for Project Gunrunner, to "walk" into Mexico.
The weapons of choice included pistols, machine guns, AK-47s and long rifles. The brochure states as its date: "Revised Feb. 2008" and is available on the Internet. The brochure was e-mailed in 2008 by an Arizona police officer. The e-mail with the brochure was originally sent by a member of the US military in Arizona in 2008.
Although the ATF has described Project Gunrunner as a sting operation, the assault weapons were allowed to walk across the border into the hands of drug cartels in Mexico. Two federal agents, Border Patrol agent Brian Terry and ICE agent Jaime Zapata, and countless innocent people in Mexico were murdered with those assault weapons.
As revealed in Narco News by Bill Conroy, new accusations from an informant in custody, Jesus Vicente Zambada Niebla incarcerted in Chicago, allege that the United States was working with the Sinoloa drug cartel, based in Mexico's states of Sonora and Sinoloa, south of Arizona. 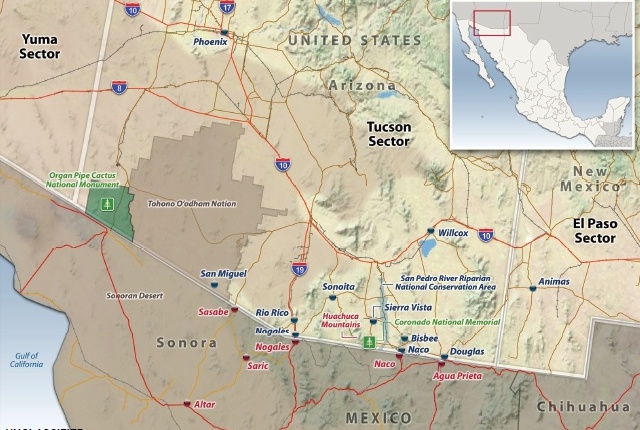 Arizona police files reveal the leader of the Sinoloa drug cartel was at a ranch near the Arizona border in 2009, east of Sonoita, Sonora, and moving large loads of marijuana to Ajo, Arizona. Another e-mail reveals the fact that Arizona police were searching for explosives buried along the border near Sasabe, Arizona.
The communities of Ajo and Sasabe in Arizona both border the Tohono O'odham Nation lands. In both cases, there was no suggestion that police warned the public, O'odham or others living in Arizona or Sonora, of the extreme danger.
In January of 2009, Arizona police were aware of the Sinoloa cartel leader's location, south of Lukeville, Arizona, which is located southwest of Tucson.
"Chapo Guzman leader of the Sinaloa Cartel was currently at a ranch near Sonoita, Sonora Mexico." The source stated "he arrived sometime in the last 48 hours along with a large entourage of his cartel members. They had a meeting / Party at the 'Ranch Jalisco' east of Sonoita, Mexico."
During the meeting, Chapo told members of the cartel that they will be responsible to defend their loads or there will be consequences for their losses. "The drivers of the contraband were instructed to carry long arms and wear body armor. Chapo also stated that he was going to take care of anyone who betrayed him."
The report included the threat to deploy grenades and long arms against US law enforcement and described the loads. "There is currently 160 tons of marijuana in Sonoita, Sonora, Mexico which has to be moved by 26 February 2009 and make way for a new shipment of 100 tons that will begin arriving after that date," the Arizona police report states.
The Arizona police files also reveal that off-duty Marines, working on contract, were stalking the border with assault weapons. The Marines said they were members of the Blue Lights camped at a remote RV park near Sasabe, southwest of Tucson, and were selected because they get the job done. In another e-mail, police searched the area of Sasabe for explosives believed to be hidden in the ground along the border and questioned one suspect who was heavily armed.

Drug traffickers at ranch near Nogales, Arizona
There is no indication that the public was informed of the extreme dangers in the Sasabe and Ajo, Arizona regions. In still another e-mail, police who rope at a ranch near Nogales, due south from Tucson, were warned to look the other way when they are roping, when the drug cartels run their loads through there.
"On Wednesday June 9, 2010 I was briefed about a recent drug seizure that an off duty Officer discovered at the Bar KS Ranch," states an Arizona police report.
The police report states the drug cartels are "aware that they are both Police Officers and are doing their Jobs, when in uniform. However a message was relayed that the DTOs (drug trafficking organizations) are expecting for them to look the other way when not in uniform, and not in service."
The report says that the drug cartels have a sniper in position that over sees the drug loads within the Bar KS area. A source told Arizona police, "Don't be surprised that the sniper takes a pop shot at Officers to either scare them off or with bad intent."
The offficers were told that the Nogales Police Department is aware of the threat and that if officers "choose to continue to work, visit, and rope at the Bar KS Ranch that they do so on their own."
Again, the police officers were warned to be extremely cautious, and Border Patrol agents were advised of the threat, but there is no indication that the public was informed of the danger.

US supplies 90 percent of Mexico's illegal firearms
In regards to the ATF's Project Gunrunner, whistleblowers and the public remain dumbfounded as to why the ATF would allow thousands of assault weapons to walk into the hands of drug cartels in Mexico and ultimately result in largescale murder.
The US diplomatic cables, as revealed by Wikileaks, prove that the US was supplying nearly all the firearms for Mexico's drug war.
Ninety percent of the firearms in Mexico, which have been seized and traced, are from US commercial suppliers. In contrast, 90 percent of the military origin weapons, such as grenades and light anti-tank weapons, are from Central American military stock.
According to a 2008 US diplomatic cable, “Mexican Attorney General Medina Mora recently noted that over 33,000 weapons have been seized since December 2006; 18,000 of which are assault rifles, AK-47, AR-15s.”
The US Embassy begins the cable by describing the “violence rising to record levels and large numbers of illegal weapons coming from the U.S. feeding it.”
The cable states, “Fueling Mexico's violence is the illicit flow of weapons and ammunition to criminal organizations from the U.S. firearms market, as well as munitions from Central American military stocks. While estimates vary regarding the percentage of U.S. commercial weapons recovered in Mexico, approximately 90 percent of all firearms seized and traced are from the United States. In contrast, at least 90 percent of military origin weapons ) such as grenades and light anti-tank weapons) are traced to Central American military stocks. Seizure data also suggests that the weapons sought by DTOs have become increasingly higher quality and more powerful. These include the Barrett .50-caliber rifle, the Colt AR-15 .223-caliber assault rifle, the AK-47 7.62-caliber assault rifle and its variants, and the FN 5.57-caliber pistols better known in Mexico as the cop killer."
The cable is written by Leslie Bassett, Chargé d’Affaires at the U.S. Embassy in Mexico, before she left her post in Mexico for the US Embassy in Manilla, Phillipines. The cable was written March 25, 2009:
http://wikileaks.org/cable/2009/03/09MEXICO880.html

The ATF said Project Gunrunner was implemented in 2006 and has received $10 million in funding. It was later called Fast and Furious in the Southwest.

Mexico waiting for answers
The government of Mexico is waiting for answers. Mexico's Attorney General Marisela Morales said her brother Mario Morales was killed with one of the Project Gunrunner weapons, after being tortured. In another of the many crimes committed with the weapons, a Barrett rifle .50-calibre -- among the long rifles shown in the Project Gunrunner Weapons of Choice brochure -- was used to shoot down a helicopter in Michoacan and wound three Mexican federal police on May 24, according to the Los Angeles Times