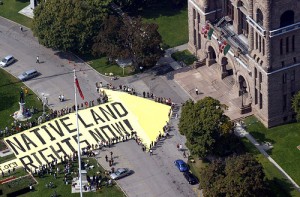 GRASSY NARROWS -- Three Indigenous peoples of Canada have just returned from speaking in three Japanese communities as part of the screening of Tadashi Orui's film titled "The Scars of Mercury,” hosted by the Kumamoto Gakuen University Minamata Research team.

Asubpeeschoseewagong and Wabaseemoong delegates were in Japan for September 6-18, 2011.
Chief Simon R. Fobister says that "We had an opportunity to share our mercury poisoning experience and symptoms of Minamata Disease with the people of Japan.  Some were surprised that Minamata Disease was so global.  Also, they had better compensation structured settlements and medical supports then our tw6 communities which inspired us to seek the same for our people."

“We are still fighting for justice for the mercury that was dumped in our river which continues to poison our bodies,” said Judy Da Silva, a delegate from Grassy Narrows.  “Our people require control over our lands and our lives in order to heal the damage that residential schools, mercury, resource extraction, and over-logging have done to our culture, or livelihood, and our bodies.”

“We are connected to the people of Minamata Japan through our experience of a shared history with industrial environmental destruction, as well as the present situation of the devastating mercury contamination which has touched our communities and continues to affect our way of life,” said Sylvia Morriseau, a delegate from Wabaseemong.  “The land, water, animals, people, and every thread of our way of life and living has been affected.”

Our days were solidly booked with visits to families affected by mercury, speaking in public forums, and meeting with renowned mercury expert Dr. Harada.

What we learned from this trip was inspiring and life changing:

We spent the first week in Kumamoto, Japan (southern part) where we met the hosting delegation from the Komamoto Gakuen University.  The hosting team included Doctor's, Assistant Researchers and families for the Minamata disease Research & committee members including Dr Harada and Dr Hanada. From there we spent a few more days in Minamata Japan and finally Tokyo, Japan.
We were treated with great honor, had fine accommodations and were well taken care of. We were able to make good contacts in Japan that we can communicate with in regards to the Minamata Disease and how similar our situations are.
We were able to be a witness and also get information through power point presentations and testimonies of the Minamata Disease (mercury poisoning) that occurred in Minamata Japan.  We saw we are truly linked by the Minamata Disease in our community.  The evidence of the alignment of our communities with the Minamata Disease was so clear to us.  The information that was handed to us by the Japanese doctors shows in detailed graphs and numbers the alignment of numbers from Dr. Harada's visit in 1975, 2004 and 2010 to Grassy Narrows.  We are hoping the Japanese doctors will come back to Wabaseemoong to further their studies on the affects of mercury poisoning on their people.  The benefits of our journey were tremendous and we will never forget this journey.

After several years, the film ‘Scars of Mercury’, filmed by my friend Tadashi Orui, is finally on the Internet! I hope you will watch it carefully and  share it very far and wide with your friends and colleagues. You may actually see me for a tiny moment in this film as I was there during part of the filming. You might catch me if you do a few ‘Freeze Frames’ during the movie. Also, one of the very first people you see in the film is my very best friend Steve Fobister Sr. Sadly, Steve’s health problems have become much worse from when I first met him 33 years ago. Please help Grassy, Whitedog and Wabauskang People all you can.
For Land and Life,
John H.W. Hummel
Link to Film:
http://intercontinentalcry.org/the-scars-of-mercury/
Contact:
Chief Fobister, Judy Da Silva 807 925 2201
Sylvia Morriseau 204 256 2237
For more information go to:
http://freegrassy.org/2010/01/06/mercury-still-killing-in-grassy-narrows/ --
You received this message because you are subscribed to the Google
Groups "Grassy Narrows Support" group.
For more information on Grassy Narrows go to FreeGrassy.org
To unsubscribe from this group, send email tograssy-narrows-support+unsubscribe@googlegroups.com
For more options, visit this group athttp://groups.google.ca/group/grassy-narrows-support?hl=en
at September 23, 2011