Photo: Natives prepare for arrest at the White House today 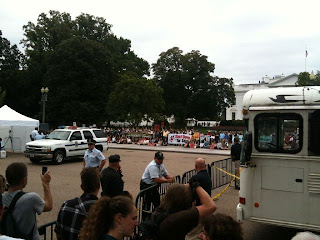 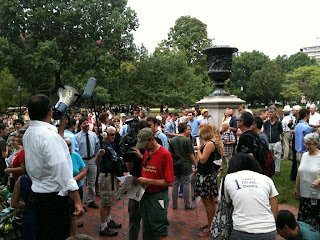 This article has been updated:
Please see: 'Portraits of Arrests'
http://bsnorrell.blogspot.com/2011/09/natives-portraits-of-arrests-white.html

WASHINGTON -- American Indian and Canadian Native leaders were arrested today in front of the White House as they refused to move under orders from the police. Representatives of Native governments and Native organizations from the United States and Canada traveled long distances to join thousands of people that have come to Washington DC during the past two weeks to tell US President Barack Obama not to issue a permit for the construction of a controversial 1,900 mile oil pipeline from Canada to the Gulf Coast.

Last Friday, the US Department of State issued the Final Environmental Impact Statement (FEIS) concluding the pipeline would have"no significant impact" on the environment. President Obama now has about three months to determine whether the controversial project is in the national interest of the US.

“The Dene National Assembly in northern Canada passed a resolution standing in solidarity with Native Americans and other people opposing this Keystone XL project. We want the people of America to hear our concerns first hand, as peoples’ that live downstream from the tar sands development” said Chief Bill Erasmus, Dene Regional Chief of Northwest Territories and representative of the Assembly of First Nations, Canada’s largest tribal organization.

Gitz Deranger, Dene from the village of Fort Chipewyan, Alberta, located downstream of the tar sands says, “I have seen the devastation of our environment and people's health with increased cancer deaths. If Obama approves this pipeline, it would only lead to more of our people needlessly dying.”

“This is an issue of our right to say no, as sovereign independent indigenous nations.  The US government doesn’t haveour best interest in mind, nor the rights of Mother Earth” says Deb WhitePlume, Lakota grassroots leader, with Owe Aku, an Oglala Lakota organization in South Dakota. “Our Lakota people oppose this pipeline because of the potentialcontamination of the surface water and of the Oglala aquifer. We have thousands of ancient andhistorical cultural resources that would be destroyed across our treaty lands.”

“It’s my responsibility as a woman to stand with Mother Earth against corporate male-dominated greed.  White Plume stood proud as her hands were handcuffed behind her back and led away.

“This is amatter of life and death, our way of life and our human rights should not be onthe altar of US energy policy,” says Pat Spears, a Lakota, with IntertribalCouncil on Utility Policy, of South Dakota. “The arrogant pollution from mining and pipelines for tar sands oil is totally unnecessary relative to meeting usoil needs.  The building of this pipeline will result in the increase in the cost of oil and its exportation,from the Gulf Coast to other countries. This does not make good economic sense.”

Chief George Stanley, Cree Regional Chief of Alberta spoke eloquently reminding the protesters that the pipeline proposal was initiated under the previous Bush administration and inherited by Obama. “Our First Nations in Alberta have been concerned of the lack of consultation of the pipelines and tar sands expansion. President Obama can do what’s right. For the President to approve this pipeline is not in the national interest of US or Canada.”
Tom Goldtooth,director of the Indigenous Environmental Network whose group organized this Indigenous Day of Action in DC said, “The Canadian tar sands, the proposed Keystone XL and all the other current and proposed pipelines and heavy hauls are weapons of mass destruction leading the path to triggering the final overheating of Mother Earth. President Obama made promises to Native Nations. Here is an opportunity for him to honor those promises and be a man of conscience by standing up to corporate power, address the compounding changes of climate change and over consumption of the resources of Mother Earth; and saying no to the Keystone XL pipeline.”

-For more information, hi-resolution photos or to arrange interviews contact:


Read previous press statement:
http://bsnorrell.blogspot.com/2011/09/media-advisory-thursday-september-1.html
With support coming in from across the Americas, Faith Spotted Eagle said this morning in South Dakota, "The Ihanktonwan Dakota early on filed suit against the Dept of State for this invasion but it was dismissed, we wish we had funds to appeal it. From the Treaty Council of the Ihanktonwan Oyate we complete oppose this erosion of justice and human life."
We'll add other names and photos soon.
Photo Tar Sands Action mobile upload.
at September 02, 2011