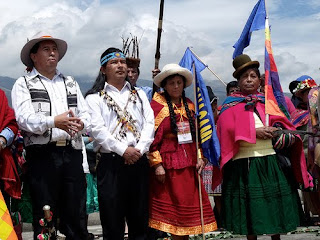 Peru passes new indigenous law, as an unredacted cable released by Wikileaks reveals US spying and US paranoia in Peru

Peru's new indigenous law will ensure "free, prior and informed consent," as stated in the UN Declaration on the Rights of Indigenous Peoples. The law was signed this week by Peru's president as Wikileaks published unredacted versions of US diplomatic cables. Those cables reveal the US spying on Indigenous activists in Peru and that the US feared Indigenous Peoples reclaiming their lands and halting mining.


The cables reveal the US paranoia over the popularity of Bolivian President Evo Morales in the Andes. The unredacted cables include spying on Peru's Andean leader Miguel Palacin, who joined with American Indian and First Nations activists at the climate summits in Cochabamba, Bolivia, and Cancun, Mexico, in 2010.


Peru's new president, Ollanta Humala, signed into law a measure this week requiring that indigenous groups are consulted prior to any mining, logging, or oil and gas projects on their land, Mongabay News reported.

"What we want to do with this law is have the voice of indigenous people be heard, and have them treated like citizens, not little children who are not consulted about anything," President Humala said.


The indigenous organization, AIDESEP, applauded the new legislation prior. However, it stated that it was only a first step. "We mustn’t fall into false triumphalism. It is now up to the government to form a national indigenous organization [...] that will uphold strict compliance with this new law," the group said in a statement.


In the Wikileaks cables, the US revealed its furor over the popularity of Bolivian President Evo Morales, and the momentum Morales and indigenous activists were gaining in Peru, in a US diplomatic cable from Peru, titled, "Morales is our President."


It is a telling cable of US spying and paranoia over the role of Indigenous Peoples protecting their lands from mining and colonialism.


The US Embassy describes the Indigenous Peoples defending their lands in Peru as "anti-system radicals." The US Embassy is especially concerned over protests which urged stopping a "planned hydroelectric project, repealing a new water law and ending concessions relating to mining and other extractive industries."


The US Embassy's summary states, "Its economic success of recent years notwithstanding, Peru remains fertile terrain for anti-system radicals, with persistent endemic poverty and social inequality, the absence of the state from large swaths of national territory, and clumsy, sometimes jarring public action when the state does intervene. But if these kinds of structural factors have played a role in recent protests (refs), so has a radical anti-system political project that is seeking to take political advantage of them to undermine Peru's progress, weaken the government and lay the groundwork for a more systematic assault on the pro-growth model. Public and private statements by the diverse and not necessarily unified leaders of the anti-system movement paint a compelling portrait of their real aims, which can be summarized in the words of one Peruvian indigenous leader that "Evo Morales is our President." Foreign participation in this anti-system movement, including from Bolivia, is real but maybe not as central as some analysts maintain."


The cable continues, "Public and private statements by the diverse and not necessarily unified leaders of the anti-system movement -- who are many, of different stripes and often local in their immediate focus -- paint a compelling picture of their real aims. Miguel Palacin, who leads a pan-Andean indigenous group based in Lima, is one of the movement's leading figures, organizing parallel anti-summits (during the Peru-based EU-LAC and APEC events of 2008) and painstakingly building links to bring the disorderly diversity of the anti-system opposition under one banner. Tellingly, Palacin's office displays Bolivian flags and a presidential portrait of Evo Morales. Palacin recently told us he sees Bolivia as a model for Peru, and that indigenous people consider Morales "our president." Palacin said his organization was working to repeal the remaining contentious legislative decrees (refs) and to press for the overhaul of Garcia's cabinet. In the longer term, Palacin said his group aimed to procure property titles for all indigenous land (hinting that once this had occurred there would be no land left for private development), and ultimately to write a new constitution incorporating language from the UN Declaration on the Rights of Indigenous Peoples."


Previously released cables from Bolivia and Peru have just been released in the unredacted form, with names of sources.