VIDEO TODAY: Females maced in the face at Union Square: 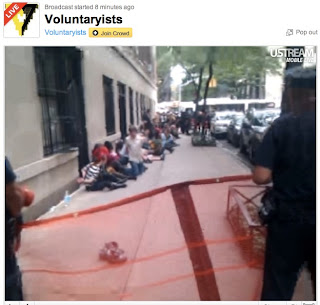 Brutal arrest, without cause, Saturday.

Contact: Lorenzo Saturday
Cell: 701‐330‐2861
Email: progressivechange@gmail.com
#OCCUPYWALLSTREET is a people powered movement for democracy that
began in America on September 17 with an encampment in the financial district
of New York City. Inspired by the Egyptian Tahrir Square uprising and the
Spanish acampadas, we vow to end the monied corruption of our democracy.
#occupwallstreet is currently located at Liberty Square, formerly named Zucotti
Park.
at September 24, 2011