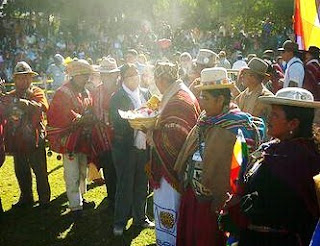 The United States feared, and fought, passage of the UN Declaration on the Rights of Indigenous Peoples

By Brenda Norrell
Censored News
http://www.bsnorrell.blogspot.com/
Photo by Michelle Cook, Navajo/Cochabamba, Bolivia, Climate Conference 2010.
.
Wikileaks has exposed a US diplomatic cable revealing why the United States feared, and fought, the passage and implementation of the UN Declaration on the Rights of Indigenous Peoples.

The US reveals in this cable that its fears Indigenous Peoples will use the UN Declaration to expand self-government, sovereign rule, and initiate new land claims to ancestral lands. Further, the US is alarmed over the potential for Indigenous Peoples gaining control of renewable and non-renewable resources.

The US is alarmed over the right for Indigenous to be consulted on any law pertaining to them. This is now known as the "right to free, prior and informed consent," as stated in the UN Declaration on the Rights of Indigenous Peoples. The cable is from the US Embassy in La Paz, Bolivia, dated Jan. 28, 2008.

"Although most indigenous leaders seem to view the UN Declaration as a 'feel good' document that will give them more inclusion in the public sector, some leaders are citing the Declaration in support of concrete aims like self-governance and control over land and resources," states the US Embassy in La Paz, Bolivia.

"Post will watch for further developments, particularly with regards to property rights and potential sovereignty or self-rule issues."

In previous US diplomatic cables exposed by Wikileaks, prior to its passage, the United States threatened Iceland about its relations with the US, if Iceland supported the UN Declaration. Further, other cables revealed that the US undertook an education campaign in an attempt to dissuade Ecuador from voting in favor of the UN Declaration.

Wikileaks released the following US diplomatic cable on Sept. 1, 2011. The US Ambassador called it "Bolivia: Repercussions of UN DRIP."

The cable is written by then US Ambassador Phillip Goldberg, President Bush's choice, who arrived from Kosovo with questions rising about his role in ethnic cleansing. Goldberg's role in Bolivia was short-lived. President Evo Morales expelled Goldberg in September of 2008, eight months after Goldberg wrote this cable. President Morales accused Goldberg of spying and attempting to divide the country and his administration. The US denied the allegations.

(C) On November 7 President Evo Morales signed the UN Declaration on the Rights of Indigenous Peoples into law. The new law contradicts existing land laws, and therefore will be subject to judicial interpretation when it begins to be cited in legal cases. Post has not found any evidence that the new law has been yet cited in legal cases, and it probably will not appear in lawsuits for at least six months. ¶2.
(C) However, the ruling Movement Toward Socialism (MAS) party's draft constitution includes a section on indigenous rights that closely mirrors the UN Declaration text, granting indigenous Bolivians rights to land and renewable resources on that land, rights to a share in the benefits of non-renewable resources, rights to be consulted on any law that "might affect them", rights to self-governance, rights to participation in all levels of government, and prioritized rights to state benefits. If the draft constitution passes, it would take precedent over other Bolivian laws and could therefore carry more weight in judicial interpretation when it contradicts existing land laws. ¶3.
(C) With the new law untested and the draft constitution not yet passed, indigenous leaders are invoking the UN Declaration itself in support of their causes. Domestically, indigenous leaders are beginning to use the UN Declaration as a rallying cry or as justification for actions such as takeovers of small properties (ref B). Although most indigenous leaders seem to view the UN Declaration as a 'feel good' document that will give them more inclusion in the public sector, some leaders are citing the Declaration in support of concrete aims like self-governance and control over land and resources. ¶4. (C) Post will watch for further developments, particularly with regards to property rights and potential sovereignty or self-rule issues. Highlights of Post's programs that focus on indigenous Bolivians are described in ref A. Post contact for indigenous issues is Beth Mader, madere@state.gov.
GOLDBERG
at September 08, 2011

Thanks for posting this article, it reveals what many in Indian Country intuitively know, yet rarely do we see it affirmed in print. Yes, although official U.S. policies profess to respect to us, it has rarely if ever been honest with itself or with us in public ways about how it really regards us. Since 1492 Euros have always regarded us as threats and we remain so today because - to be blunt - our existence, our independence remains in opposition to their colonialism (which has never really changed) and because Federal Indian law exists solely to justify, retain, and glorify the land grab that IS U.S. history. When they're honest with themselves about us (which I believe is also a rare event) our status is a constant reminder of the lying, thieving, and murdering they perpetrated in order to subdue us, indoctrinate us, and work to keep control over us. Today their colonialism is just done in a more politically correct manner - to them we still remain threats, because in part we know the truth about them and their white-washed version of U.S. history.