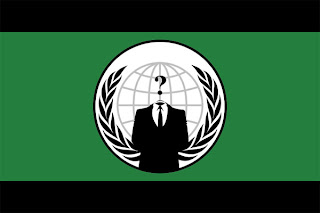 WASHINGTON -- A US Cybersecurity alert from Homeland Security -- exposed today by Anonymous -- reveals the United States is concerned about Anonymous and its new hacktivist agenda targeting corporations, including the Tar Sands energy companies and Monsanto.

The alert states that Anonymous appears to now have a "hactivist" agenda and that most of the damage is by way of harassment, embarrassment and denials of service.

However, the report also attributes the successful protest of Tar Sands energy companies in Montana this summer to Anonymous.

"On 12 July 2011, Anonymous released a press report on a website titled 'Anonymous Operation Green Rights \ Project Tarmaggedon.'The report outlined Anonymous’ hacktivists concerns with global warming and called for protests against the Alberta Tar Sands (Canada) project along Highway 12 in Montana. As quoted from its posting, 'Anonymous Operation Green Rights calls your attention to an urgent situation in North America perpetuated by the boundless greed of the usual suspect: Exxon Mobil, ConocoPhillips, Canadian Oil Sands Ltd. Imperial Oil, the Royal Bank of Scotland and many others.'"
"On 13 July 2011, according to open source reporting, seventy protesters ascended on the Montana state capitol building to protest the Alberta Tar Sands project and the Keystone, XL 36 inch underground pipeline project.e The NCCIC assesses that Anonymous’ participation in peaceful protests carries a moderate likelihood of being accompanied by cyber attacks or exploitations, though no malicious cyber activity was reported in association with this protest."

The report is the titled the National Cybersecurity and Communications Integration Center Bulletin, and quotes Anonymous and national news articles.

The Bulletin also shares a concern for Monsanto.

"Monsanto is a U.S.-based global biotech seed company. Tom Helscher, the company director of corporate affairs, in an e-mail to msnbc.com confirmed that Monsanto 'experienced a disruption to its website that appeared to be from an organized cyber group.'"
Read the Bulletin:
http://info.publicintelligence.net/NCCIC-AnonymousICS.pdf

The Navajo commercial farm, Navajo Agricultural Products Industries, on the Navajo Nation, is still using genetically-modified Monsanto seeds and promoting these seeds that are destroying the lives of Indigenous Peoples and farmers around the world.

The NAPI farm is the same farm where Raytheon Missiles has a factory on the Navajo farmland. (This is one of the issues censored by Indian Country Today just before they fired me.)

The products are sold under the name of Navajo Pride.

Every thirty minutes an Indian farmer commits suicide and in the last sixteen years, more than a quarter of a million farmers have died. Some claim a major cause is poor yields leading to mounting debt, an increased need for pesticides, and the higher cost of the Bt cotton seed sold by Monsanto. -- Wikipedia

TAR SANDS ACTION RETURNS TO DC ON NOV. 6:
The Tar Sands are already destroying the homelands and waterways of the Cree and First Nations in Canada. The proposed Keystone XL pipeline is an environmental disaster in the making. It would run from Canada to Texas, across the massive Ogalalla Aquifer, and carry highly corrosive oil. There is a high risk of deadly spills, which would contaminate the heartland's water supplies and crops, Indian country and the south.
Read more:
http://www.tarsandsaction.org