OAKLAND, Calif. -- When this photo by Justin Warren was posted of Occupy Oakland on Wednesday night -- after the violent repression by Oakland police on Tuesday night -- it was retweeted by Egyptian activists, and brought solidarity from people around the world.

Voices of support and solidarity came from Western Shoshone in Nevada and from Santiago, Chile, China, South Africa, New Zealand, Spain and Romania. Messages of love and support came in from Fiji, BC, Canada, Germany and Wales.

On Censored News' Facebook, (brenda.norrell) the photo was "liked" and shared more than 2,000 times within 12 hours. Elsewhere on the web, there were 15,000 views.

Veterans for Peace released a statement concerning Scott Olsen, the US Marine who was hit in the head by an Oakland police projectile on Tuesday night, and suffered a fractured skull and brain swelling.

A video shows Olsen and Navy veteran Joshua Shepherd, both member of Veterans for Peace, standing in front of the crowd to protect them.

The video shows Oakland police firing tear gas canisters directly at the veterans, who were separated from the crowd behind them by police fencing. It shows police firing at Olsen a second time while friends attempted to rescue him as he was fallen on the pavement.

In a second video, a young man who helped carry Olsen from the scene describes a second projectile crashing close to Olsen's head as they were moving him to the hospital. Olsen's condition was upgraded to fair on Thursday and he was reported breathing on his own.

Occupy Oakland filled the streets on Wednesday night, as Occupy San Francisco prepared for arrest with a huge dance party outside, with a California senator and city officials present to ensure the peoples rights were not violated as they were in Oakland the night before.

To prevent Oakland protesters from joining San Francisco, the Bay Area Rapid Transit system (BART) stations were blocked by police in Oakland and closed near Occupy San Francisco, at the Ferry Building in San Francisco.

In San Francisco, as people prepared for arrest, Senator Leland Yee said he was there to make sure the peoples rights were protected. San Francisco City Supervisors were also present.

Thanks were sent out to Wikileaks and the hactivists at Anonymous. One of the reasons that the Occupy movement began was because the banks and PayPal froze all Wikileaks accounts. The US used the banks to silence the truth, after the Wikileaks' exposures of the US killing of civilians and journalists in Iraq and Afghanistan.

In the midnight hour, Oakland activists began catching rides to San Francisco after BART blocked its doors in Oakland. Eventually, the police raid in San Francisco was called off in the dawn hours of Thursday.

Thanks resounded around the world to Occupy Oakland, photographer Justin Warren and the global community. 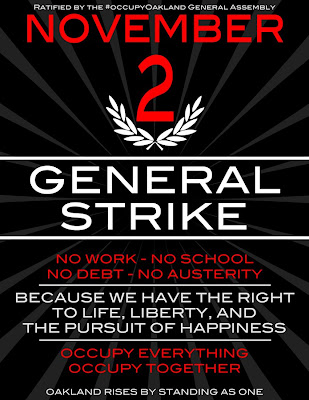