While some Native Americans said they appreciated Diane Sawyer's "Hidden America, Children of the Plains," others said it was pathetic and paternalistic. 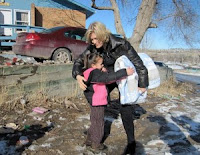 Readers of Censored News said Lakotas must tell their own stories, rather than allowing a corporation to spoon-feed a contrived program of sugar-coated sympathy that refuses to document US colonization.

Debra White Plume, Lakota from Pine Ridge, S.D., points out that this type of television program leaves out the issue of colonization, and is based on the perspective of the corporation.

White Plume said, "Remember when Tom Brokaw did a show like Diane Sawyer is doing. His was called 'Tragedy at Pine Ridge,' about 20 years ago. Brokaw's showed a lot of drunkenness and White Clay, cops busting folks intoxicated, etc. These video journalists rarely interview anyone who speaks of colonization, and how the drinking and drugging is colonized behavior, and that booze and drugs are white man's poisons. Hmm, these journalists show what the corporation they work for wants them to show."

John M. Kane, Mohawk, said the real story is about the theft by the US government and will not win Sawyer an Emmy.

Kane said, "The show was all about evoking sympathy for these poor 'Americans' that 'time' forgot and casting Sawyer as a compassionate hero for telling this 'compelling' story. Time didn't do this to the Lakota, Americans did. They trespassed on our lands until their government 'legalized' the theft. They cheated us on mineral rights, water rights, grazing rights and general land use. $40 billion worth of Native assets have been lost by the BIA. No financing available for businesses unless it is for 'Americans' to set up beer stores just off the rez line. The real story won't win Sawyer an Emmy. The real story would evoke anger, not sympathy and disgust."

Kane, host of Lets Talk Native Pride radio show said, "Maybe they should build schools where these kids can live and learn to be industrious. They could be strict; no drugs, no alcohol, no sex, no silly Native stuff. They could teach them good English. They could aspire to be US presidents and American Idols or be quarterbacks in Americas game. They can work the fields to raise their own food. They can learn to march and take orders. Oh yeah, that didn't work either. Let's just let John Stossel and Diane Sawyer show pictures of them every now and then instead."

Louise Thundercloud said Lakotas must tell their own stories. "The real story will not be told unless it is told by us. We can never expect our stories to be accurately told by wasichu can we? After all, you accurately stated the crap done to our people by this government, so can we really expect anything other than some sugar-coated sympathy 'sort of' story told by a non-Lakota?" Thundercloud said.

Joyce Smith McDade, Western Shoshone, was among many Native Americans pointing out that there is the suggestion in Sawyer's program that Native people should leave their homelands.

McDade said, "Diane Sawyer says, 'So many people say, Why don't you leave (the reservation)?' It is the question over and over again. It is isolated, it is difficult land.  The Native woman answers, 'That is your country. That is your nation. It is the same thing as saying, 'America's in a recession. Why don't you get out of here?' It is where you're from, it is who you are. Where would you go?' Very clearly said!"

Kathryn Price NicDhana, Irish/Scottish-American, points out that Native children were removed from their homes because of the type of thinking in the program.

NicDhana said, "The 20/20 show was appalling and exploitative. Sawyer was ghoulish and patronizing. My friends and I watched this and were sickened by Sawyer's inappropriate tone and focus, and aghast that so many people online were praising it."

"There were blatant falsehoods in the piece, and promotion of corporate interests. Perhaps the most dangerous part of the piece that some of us saw was the suggestion that Native children should be taken out of their communities - potentially laying the groundwork for attacks on the Indian Child Welfare Act."

NicDhana said, "If Diane Sawyer really wants to "help" the 'Children of the Plains,' maybe she should listen to their Elders. Maybe she should take some of the money they spent on this and give it to a Native filmmaker, and use her media and showbiz contacts to help promote media that is controlled by Native people," NicDhana said.

In Europe and Central America, there was similar disgust at Sawyer's patronizing approach.

Meri Mononen-Matias, human rights defender and coordinator for Mexico at the Finish Peace Union, was appalled.

Mononen-Matias said, "About the ABC program clip http://abcnews.go.com/2020/video/hidden-america-children-plains-14708439 , we checked it out -- pathetic, commercial, 'usan al pueblo' says my Zapotec husband. The white woman Diane goes there to give courage to the poor poor crying indigenous women. So patronizing, as if they were looking for the white people to give their acceptance to their existence, very stereotypical like the western films, the noble savage etc making it in 'our world,' making the tradition to folklore -- the superficial mythical -- not a living culture/philosophy of life.

Mononen-Matias said, "Another friend, Timo, said it is disgusting. He is a scientist, an academic and in labour health systems projects in Central America," she said, adding that he is very knowledgeable and ethically conscious.

Finally, there was this response to the program by Bryan Brant: "The only good thing happening on Pine Ridge is a Subway? Give me a break."

"The question, Why don't you move away?' was meant to say to Oyate, 'Its your fault since you wont leave.' Diane you just don't get it."

Awesome Brenda!! Thank you for doing this article!

Awesome article Censored News! Thank You for writing this!

Thank you, Thank you, Thank you for this, Brenda. The 20/20 show was appalling and exploitative. Sawyer was ghoulish and patronizing. My friends and I watched this and were sickened by Sawyer's inappropriate tone and focus, and aghast that so many people online were praising it.

There were blatant falsehoods in the piece, and promotion of corporate interests. Perhaps the most dangerous part of the piece that some of us saw was the suggestion that Native children should be taken out of their communities - potentially laying the groundwork for attacks on the Indian Child Welfare Act.

If Diane Sawyer really wants to "help" the "Children of the Plains", maybe she should listen to their Elders. Maybe she should take some of the money they spent on this and give it to a Native filmmaker, and use her media and showbiz contacts to help promote media that is controlled by Native people.

I disagree, those children were very brave and courageous to share their stories. Your article is cruel and offending. As a Native American I felt the show was perfect, my rez may not be that bad but that shows how bad living conditions really are on the reservation-It hit close to home with me. I commend Diane Sawyer for sharing the story with the entire world and hopefully opening the world of opportunities to these children. And Mind you the show was called "Hidden America: Children of the Plains" not "Elders of the Plains" and watch the previous "Hidden America's: Children of the Mountains" to gain the understanding of the purpose of her show before you make untrue statements. Thanks :)

Oh my, you added my comment to the article (!). I am honoured, of course, but should probably mention for anyone who doesn't know: I am not Indigenous, I'm Irish-/Scottish-American. The friends with whom I've been discussing the show are both Native and non-Native. We now return you to your regularly-scheduled NDN voices...

The word American was used 100 times in this "special"; Lakota was used 5. Assimilation ran all through this piece. Barely a mention of the causes; just a flippant inquiry on why they just don't leave. "Don't you watch TV and see how we live?" "Doesn't that make you sad?" She seemed to highlight the self loathing that US policies have bred. The boy didn't want to be a Native leader, but rather the US president. "She dreams of being an American Idol". The first Americans. Forgotten Americans. Brave Americans. Young American Warriors. Drunkest Americans. Most suicidal Americans. The most unemployed Americans. How about the most screwed by Americans?

Thanks Brenda for covering this , love your writings.

We are More than that... Video rebuttal to 20/20's "Children of the Plains" by students on Rosebud.

"I know what you probably think of us... we saw the special too. Maybe you saw a picture, or read an article. But we want you to know, we're more than that... We have so much more than poverty."

I saw a clip of the show on facebook, so googled to try and see if the teen finished school, got to further his education, etc. Was hoping that someone fixed the leaking roof stopping the moldy ceiling. Regardless of what was said on the show, that needed to be done by someone who could or would.

I too was looking to see if that family got some help for their living conditions.

Being of Native Indian descent, it saddens me on many levels. First and foremost, the native Indians have lost so much. Everyone needs to assimilate to some degree, but each and every one of could or may be in this state of affairs. When you take away a person's rights and dislocate them, where are they to go and how are they to live? How are their spiritual and cultural rights protected. This country was founded on freedoms on many things. The preserved this land long before others came. It is like many things, you have to be one to understand why things are like they are. Being in an institution of higher learning we are told we need to recruit underrepresented people. It is hard to recruit them when there is no infrastructure to support them and retain them outside of their native homelands. We wonder why health disparities occur, well people open your eyes. Diane Sawyer's piece was disheartening and I am sure she felt it was shedding light on a sad situation, but in fact should follow up to see if that young man Robert actually did go on through school and become a productive member of society. With all the wealth in this country, more should be done in helping the less fortunate, then maybe down the road we would have more highly educated people understanding the world and making it a better place for all to live.