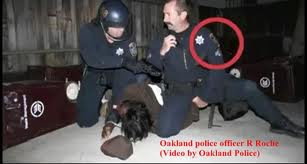 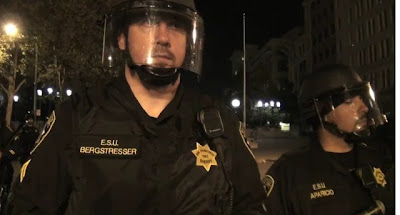 Scott Olsen was shot at Occupy Oakland. An Oakland officer can be heard
on the loud speaker giving commands. More photos below. 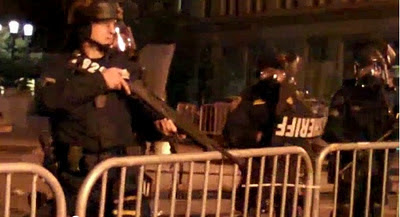 Update: Nov. 4, 2011: The following video shows the unidentified officer above moving down the police line when Scott Olsen was shot. The riot shotgun he is holding can fire rubber bullets or bean bags. In this video, police are shown firing riot shotguns at head level into the crowd, on the far right in the video, minutes after Olsen was shot. New photos and videos show that several Sheriff's Departments were positioned in the area when Olsen was shot:
http://bsnorrell.blogspot.com/#!/2011/11/update-who-shot-scott-olsen-in-oakland.html
Censored News
http://www.bsnorrell.blogspot.com/
Update: 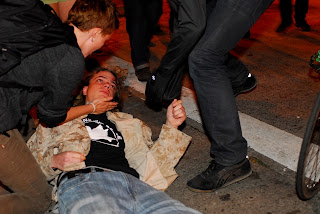 OAKLAND, Calif. -- US Marines are gathering evidence to prosecute the officers who shot fellow Marine Scott Olsen, member of Veterans for Peace, at Occupy Oakland on Tuesday night. Scott was standing in front of police to protect the people behind him, when police fired directly at him.
Scott suffered a skull fracture when a police projectile struck him in the head. After Scott was down, and people rushed to help him yelling for medics. Police threw a flash grenade at Scott after he was unconscious and bleeding from the mouth and head.
A video reveals that the San Francisco Sheriff's Emergency Services Unit (ESU) were on the front police line at Occupy Oakland when the tear gas canisters were fired. The video below shows San Francisco Sheriff ESU team member Scott Bergstresser, (whose uniform has two stripes) next to officer Ceciel Yambao.
"Multiple copies of the videos used to ID Yambao, Bergstresser and officer Hugo Aparicio are on servers. Too late for YouTube takedowns," according to a Twitter message today.
"Two questions that Bergstresser should be asked under oath: Did you fire directly at Scott? Did you throw a grenade?" At minimum, Bergstresser is a witness.
The video reveals one of the officers striking his baton at a disabled woman before the gas attack began. An Oakland officer in the background can be heard giving commands on a loud speaker.
Also see: Video: Officer shows flash bang at Olsen after he was hit:
http://youtu.be/xWXm3cd5S-o
A separate series of photos details the events when the teargas was fired:
http://www.dailykos.com/story/2011/10/27/1030750/-UPDATED:-Oakland-Mayor-Quan-Prosecute-This-Cop-or-Resign:-Photo-Evidence,-Scott-Olsen-Shooting
WATCH VIDEO: 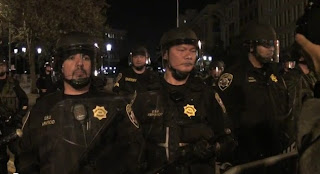 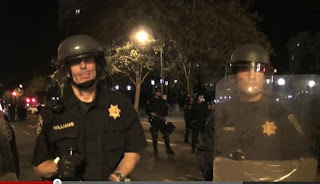 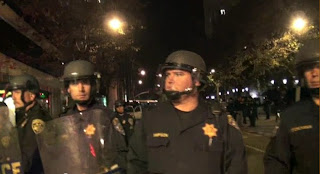 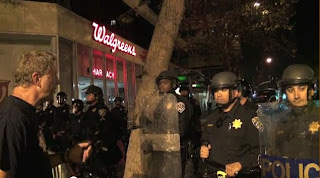 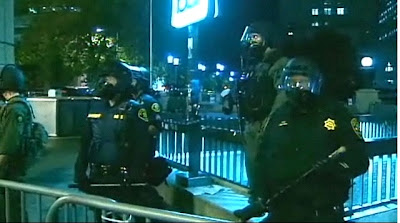 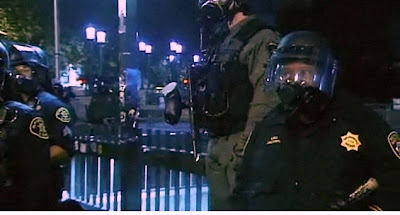 Officer in center with pepperball gun
shortly before Olsen was hit
.
Occupy Marines Statement:
OccupyMARINES Have Watched Closely The Response From The OPD, The Mayor, The Governor, And All Others Involved In The Oakland Attack On Peaceful Demonstrators; We Have Observed These Pathetic Cowards Refuse Responsibility For Their Actions That May Very Well Alter The Course Of Our Brother’s Life. Additionally, Many Other Police Departments Nationwide Deploy Similar Riot Tactics Against Demonstrators Honoring The OWS 8, A Peaceful Declaration Of Assembly; We Will Organize Peacefully Against These Departments.
In Response To The Oakland Shooting Of Scott Olsen OccupyMARINES Request The Following:
The GOP Cowards Responsible For Influencing This Event Be Brought To Justice. Track Names And Photos Of Each And Email Them To Us
Identify The 300 OPD Riot Officers By Name, Photo, And Badge Number With Boots On The Ground Engaging In Illegal Excessive Force Acts Against Peaceful Americans For Prosecution.
Identify The Officer Responsible For Harming Scott Olsen By Name And Photo For Prosecution.
The Honorable Resignation Of Oakland Mayor Jean Quan And Acting Police Chief Howard Jordan.
A Public Apology From California Governor Edmund G. Brown Jr. For The Unlawful Injury Of Our Brother Scott Olsen.
We Fully Intend To Make An Example, Legally And Peacefully, Of The Cowards Associated With Harming An American Veteran. We Will Not Stop Until Our Aforementioned Demands Are Met In Their Entirety.
God Be With Scott Olsen, We Pray A Speedy Recovery For Him And His Mother.
Semper Fidelis Scott Olsen
Keep Pushing Forward America We Support You.

Respect for your action! Greets from Romania!

If you want to get the police attention, people need to show up at council meetings in their cities and demand reductions to their police budgets.

When the Police start shooting Veterans from the Iraq War, the Police have lost the war.

Here is that same woman being slammed to the ground after the incident with the baton.

I was using my iphone from a distance and you can still hear how hard she hits the ground.

I like it and hope that you continue posting.

Let me show other source that may be good for community.

Thanks For sharing this Superb article.I use this Article to show my assignment in college.it is useful For me Great Work.
Oakland