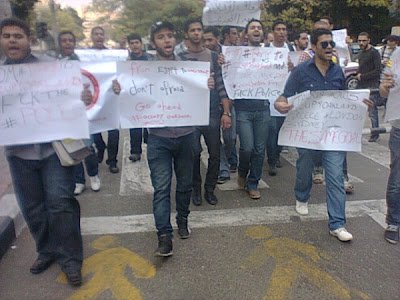 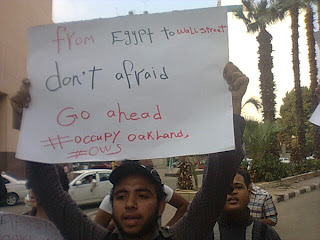 By Xeni Jardin BoingBoing at 8:12 am Friday, Oct 28
By Egyptian blogger Mohammed Maree
Full story: http://boingboing.net/2011/10/28/tahrir.html?utm_source=feedburner&utm_medium=feed&utm_campaign=Feed%3A+boingboing%2FiBag+%28Boing+Boing%29&utm_content=Google+Reader
Reposted at Censored News
As they vowed earlier this week to do, Egyptian pro-democracy protesters marched from Tahrir square to the U.S. Embassy today to march in support of Occupy Oakland—and against the type of police brutality witnessed in Oakland on Tuesday night, and commonly experienced in Egypt.
In this post, photos from Egyptian blogger Mohammed Maree, who is there at the march live-tweeting these snapshots. He is a journalist with Egytimes.org, a human rights activist, and a veterinarian; all photos are his.