“DRUMMING FOR THE EARTH GATHERING” 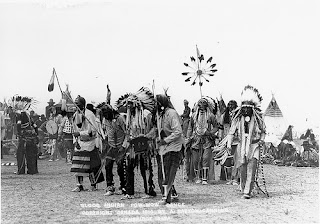 SPONSORED BY “FRIENDS OF BLOOD LANDS” AND VARIOUS ENVIRONMENTAL COALITIONS

COME AND JOIN US FOR PRAYERS AND DRUMMING TO PROTECT THE EARTH, WATER, LAND, AIR, PLANTS AND ANIMALS OF THE BLOOD RESERVE
ALL DRUMMERS AND ELDERS WELCOME
DIRECTIONS:
TURN AT JUNCTION OF HIGHWAY 2 AND 509 WEST OF COALHURST ALBERTA, DRIVE FOR 14 KILOMETERS TOWARDS STANDOFF AND TURN WEST AT THE MATAKI FARMS/ SAWKEE FEED LOT TURN OFF
YOU WILL SEE A BIG BLUE AND WHITE TENT
OR
FROM STANDOFF TURN AT JUNCTION OF HIGHWAY 1 AND 509, DRIVE FOR APPROXIMATELY 20 TO 25 MINUTES AND YOU WILL SEE THE BIG BLUE AND WHITE TENT
BRING: CHAIR, WATER, TOBACCO, CLOTH OR RIBBONS FOR OFFERING
FOR MORE INFORMATION
CONTACT MIKE AT (403) 737 – 2194 OR chiefbird@hotmail.com
at September 27, 2011 No comments:

NO! to tarsands and the Keystone XL pipeline

Clayton Thomas-Muller of the Indigenous Environmental Network, said the Ottawa Tar Sands Action, September 26, 2011, was the largest civil disobedience in the history of the Canadian Climate Justice Movement! On Parliament Hill, 212 crossed police line and risked arrest and 117 were arrested. More than 80 were released in a mass release by police when they got tired of processing folks.

Cree protesters were among those arrested in Ottawa on Monday, demanding an end to the dirty tarsands and the proposed Keystone XL pipeline, an environmental disaster in the making from Canada to the Gulf Coast.
George Poitras, former Chief of the Mikisew Cree First Nation, and First Nation youths, were among those arrested Mon., Sept. 26, outside of Parliament, demanding an end to the tarsands which is destroying First Nation homelands.
Clayton Thomas-Muller, Cree and among the organizers, said 212 people crossed the police line and risked arrest. Of those, 117 were arrested. More than 80 were released in a mass release by police when they got tired of processing those who crossed the police line.
Speaking at the rally on Parliament Hill, Chief Terry McKay, Tsimshian Nation, began with these words, “We come in peace, we have no quarrel. We see the birds dying, animals dying, and the elders don’t want to eat the deer, the elk, the moose anymore.”
“You come to our land and you take it, and you don’t put anything back, that is not right.”
Chief Jackie Thomas Sai’kuz First Nation said her people came to the Ottawa action to stand up with their brothers and sisters, the Cree and Dene. “We’re standing up to protect our water. We’re standing up to protect our Cree and Dene brothers and sisters.”
“We will put up a wall that Enbridge pipeline can not break through!” Chief Thomas said, to a roar of cheers from the crowd.
Melina Laboucan-Massimo, Lubicon Cree youth, said the government has put her family and all of the families at risk. “This behind me is the House of Commons -- not the House of Corporations.”
Cree actress Tantoo Cardinal also spoke of the suffering of the Cree people.
“We have suffered holocaust, we have suffered genocide. My mothers people knew, and know to this day: The earth is alive. There is no energy more powerful than the natural force. Thank you for standing with your heart, and standing with your spirit, for generations and generations.”
Joining First Nation activists and spiritual leaders was Maude Barlow, national chairperson of the Council of Canadians. Barlow said it is the energy companies that are driving policies, and not the other way around. She said they are violating the rights of the people, including the right to water.
“I am doing this because I love my grandkids.” Barlow said when she and the others crossed the police line, they would not be breaking the law in her opinion. “The people who are breaking the law are in the Harper government, in that building right there.”
Dene National Chief Bill Erasmus was among those speaking at the rally during the planned civil disobedience organized by First Nations and environmental organizations, and endorsed by the Dene Nation.
Chief Erasmus spoke to the crowd of 1,000 people about the impacts of tar sands developments on Dene. Chief Erasmus said the Dene are already afraid to drink the water because of oil spills.
"Toxic tailings ponds already cover hundreds of square kilometers, and are growing by the minute, “Erasmus said. "Millions of liters of contaminated water leak each day from these tailings ponds into groundwater and tributaries in the Athabasca River watershed. These waters flow through Denendeh, from northern Alberta to the Arctic Ocean, and any pollution in the water impacts our communities. This is one of our main concerns about tar sands development."
Chief Erasmus said the Dene Nation has endorsed the Ottawa protests as previous efforts to lobby the government have fallen on deaf ears.
Read more:
http://narcosphere.narconews.com/notebook/brenda-norrell/2011/09/ottawa-tarsands-cree-arrested-parliament
at September 27, 2011 No comments: