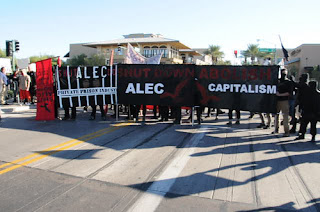 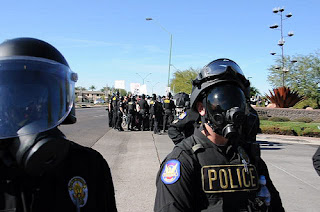 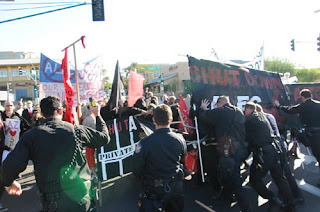 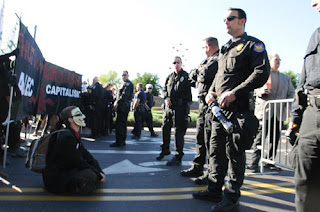 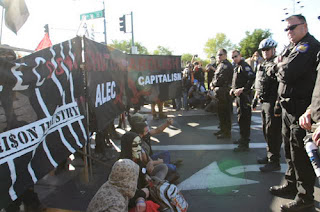 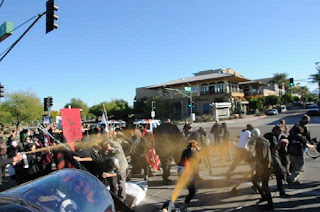 Protests Continue with Actions Planned to Expose and Shutdown ALEC Conference
SCOTTSDALE, Ariz. — (Wed. Dec.1, 2011) A diverse range of people and organizations are converging for a second day of planned protests against the secretive, nationwide organization known as the American Legislative Exchange Council (ALEC).
Through ALEC, some of the most powerful corporations and thousands of state legislators meet to create laws to continue their drive for profits, and to control and destroy our communities and the earth.
Yesterday, hundreds marched and converged on the Kierland Westin Resort and Spa in Scottsdale, where ALEC is attempting to hold its annual “States and Nation Summit”.
Dozens of protesters were attacked by police with pepper spray and eight people were arrested in actions to shutdown the ALEC meeting.
A march was held today, Thursday, December 1, at Freeport-McMoRan Copper & Gold Inc. headquarters in downtown Phoenix, AZ at 333 N Central Ave.
Freeport-McMoRan is a large international mining company and ALEC member.
At Cerro Verde, in Peru’s Arequipa region, some 1,200 workers at a Freeport-McMoRan mine walked out Sept 14, 2011 to demand higher wages. The next day, 10,000 workers in West Papau, Indonesia, also walked out demanding higher wages.
In 2003, news surfaced that Freeport Indonesia had paid more than $11 million to the Indonesian army for “security” at it’s mine in West Papua. In efforts to ensure the mine operates fluidly, the Indonesian government began a heavy campaign of murder, political assassination, imprisonment, rape and torture.
The company has also been targeted by demonstrations due to extreme environmental impacts.
At least seven protestors have been killed as of Oct 24, 2011.
In Superior Arizona San Carlos Apaches are facing the profit driven attack on their land from Superior Arizona based company Resolution Copper who connects to Freeport-McMoRan through a web of partnerships. Resolution Copper is currently threatening to create the largest Copper Mine in North America on sacred Apache land.
ALEC also creates laws that further attacks on Indigenous Peoples through forced relocation, eco-cide, and desecration of sacred sites.
At yesterday’s protest an O’odham elder was transported to the hospital for breathing difficulties due to the police’s pepper spray attack, he remains hospitalized today.
Most of us learned about ALEC when they were exposed for their connections to private prisons, their role in SB1070 and its copy cat laws. They are also involved in various efforts to criminalize people through such things as the mandatory minimum sentencing and three strikes laws. They were also involved in the creation of the Animal Enterprise Terrorism Act (AETA), they support companies involved with energy extraction across the world including the controversial Tar Sands and Keystone Pipeline, as well major pharmaceutical companies.
Some of the corporate members of ALEC include; Peabody Energy, Freeport McMoRan, ConocoPhillips, ExxonMobil, BP America, Koch Companies, AT&T, Coca-Cola, Wal-Mart, Johnson & Johnson, Kraft, Pfizer, Salt River Project, State Farm Insurance, UPS, Corrections Corporation of America, Dow Chemical, Shell Oil Company, G4S, Novartis, IBM, Newmont Mining, Monsanto, Nestlé , Cargill, Amazon.com, Barrick Gold,Bank of America, & hundreds more.
Additional actions to shutdown ALEC are planned through December 3.
More information at: www.azresistsalec.wordpress.com
http://www.sourcewatch.org/index.php?title=ALEC_Corporations
http://www.alecexposed.org/
at December 01, 2011 No comments:

(WED. DEC 1, 2011) Today, Rev. Jesse Jackson joins the protest against ALEC in the Phoenix Valley at Scottsdale. Meanwhile, Obama was in New York at a fundraiser on Wednesday, and not at the White House Listening Conference with Native American leaders. All 565 leaders of Indian Nations were invited to the Listening Conference at the White House.
In today's Censored News, Ben Carnes, Choctaw, in an example of being brief, offers 125 words for Obama.
At a fundraiser in New York last night, Obama said he has done more than any other US president for Israeli security.
“I try not to pat myself too much on the back, but this administration has done more for the security of the state of Israel than any previous administration," the Jerusalem Post reported.
The US role in Apartheid border security became obvious when Boeing subcontracted the Israeli Apartheid defense contractor Elbit Systems -- responsible for Apartheid security on the Palestine border -- for the US/Mexico border security.
The duo produced a billion dollar boondoggle.
But don't worry, Boeing is back and now asking Tohono O'odham districts to approve new US spy towers on their lands. Boeing has already announced locally its latest corporate profiteering and spying venture in the Ajo region.
Wikileaks released today a trove of Spy Files, revealing contractors around the world and how they spy on you.
Tohono O'odham Veteran and Peacemaker David Ortega, pepper sprayed at the ALEC protest by police on Wednesday, remains hospitalized.
Native Americans and American Indians are in Durban, South Africa, at the UN climate summit, fighting the scam of carbon credits, and corporate mining and oil and gas profiteers targeting Indigenous lands around the world.
Indigenous continue with Resist ALEC protests all week in Scottsdale, Arizona, in the Phoenix Valley.
Read the latest from Mohawk Nation News and more on Censored News homepage:
http://www.bsnorrell.blogspot.com
at December 01, 2011 No comments:


A friend of mine wrote According to eHow, the average person speaks 125 words in a minute.
http://www.ehow.com/how_8070630_calculate-words-per-minute-speech.html
In reference to the meeting in DC, I thought of what I would say in one minute. After some thought, the following 125 words, although directed at Obama, might be better served to show the so-called tribal leaders that they need to learn to speak up. If nothing else, it would succinctly state what so many people feel.
Mr. Obama
Appreciate your generous offer to give one minute to speak. Let me say, You Suck! You are a coward who cannot stand behind your promises or convictions, if you had any! Your betrayal will be remembered as another in a long line of broken promises behind your grandiose smile of greed.
You could not grant freedom from an unjust imprisonment to Peltier with a stroke of a pen. You could not find the courage to remove the shackles of repressive laws and acts of congress from us to begin the process of healing and moving forward. Instead, your actions have only weighted us down further into the bowls of America. You will be remembered like Custer, Lincoln and Jackson. They sucked too! 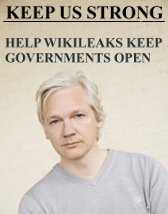 The Spyfiles
WikiLeaks: The Spy Files
http://wikileaks.org/the-spyfiles.html
Mass interception of entire populations is not only a reality, it is a secret new industry spanning 25 countries

It sounds like something out of Hollywood, but as of today, mass interception systems, built by Western intelligence contractors, including for ’political opponents’ are a reality. Today WikiLeaks began releasing a database of hundreds of documents from as many as 160 intelligence contractors in the mass surveillance industry. Working with Bugged Planet and Privacy International, as well as media organizations form six countries – ARD in Germany, The Bureau of Investigative Journalism in the UK, The Hindu in India, L’Espresso in Italy, OWNI in France and the Washington Post in the U.S. Wikileaks is shining a light on this secret industry that has boomed since September 11, 2001 and is worth billions of dollars per year. WikiLeaks has released 287 documents today, but the Spy Files project is ongoing and further information will be released this week and into next year.
International surveillance companies are based in the more technologically sophisticated countries, and they sell their technology on to every country of the world. This industry is, in practice, unregulated. Intelligence agencies, military forces and police authorities are able to silently, and on mass, and secretly intercept calls and take over computers without the help or knowledge of the telecommunication providers. Users’ physical location can be tracked if they are carrying a mobile phone, even if it is only on stand by.
But the WikiLeaks Spy Files are more than just about ’good Western countries’ exporting to ’bad developing world countries’. Western companies are also selling a vast range of mass surveillance equipment to Western intelligence agencies. In traditional spy stories, intelligence agencies like MI5 bug the phone of one or two people of interest. In the last ten years systems for indiscriminate, mass surveillance have become the norm. Intelligence companies such as VASTech secretly sell equipment to permanently record the phone calls of entire nations. Others record the location of every mobile phone in a city, down to 50 meters. Systems to infect every Facebook user, or smart-phone owner of an entire population group are on the intelligence market.
Selling Surveillance to Dictators
When citizens overthrew the dictatorships in Egypt and Libya this year, they uncovered listening rooms where devices from Gamma corporation of the UK, Amesys of France, VASTech of South Africa and ZTE Corp of China monitored their every move online and on the phone.
Surveillance companies like SS8 in the U.S., Hacking Team in Italy and Vupen in France manufacture viruses (Trojans) that hijack individual computers and phones (including iPhones, Blackberries and Androids), take over the device, record its every use, movement, and even the sights and sounds of the room it is in. Other companies like Phoenexia in the Czech Republic collaborate with the military to create speech analysis tools. They identify individuals by gender, age and stress levels and track them based on ‘voiceprints’. Blue Coat in the U.S. and Ipoque in Germany sell tools to governments in countries like China and Iran to prevent dissidents from organizing online.
Trovicor, a subsidiary of Nokia Siemens Networks, supplied the Bahraini government with interception technologies that tracked human rights activist Abdul Ghani Al Khanjar. He was shown details of personal mobile phone conversations from before he was interrogated and beaten in the winter of 2010-2011.
How Mass Surveillance Contractors Share Your Data with the State
In January 2011, the National Security Agency broke ground on a $1.5 billion facility in the Utah desert that is designed to store terabytes of domestic and foreign intelligence data forever and process it for years to come.
Telecommunication companies are forthcoming when it comes to disclosing client information to the authorities - no matter the country. Headlines during August’s unrest in the UK exposed how Research in Motion (RIM), makers of the Blackberry, offered to help the government identify their clients. RIM has been in similar negotiations to share BlackBerry Messenger data with the governments of India, Lebanon, Saudi Arabia, and the United Arab Emirates.
Weaponizing Data Kills Innocent People
There are commercial firms that now sell special software that analyze this data and turn it into powerful tools that can be used by military and intelligence agencies.
For example, in military bases across the U.S., Air Force pilots use a video link and joystick to fly Predator drones to conduct surveillance over the Middle East and Central Asia. This data is available to Central Intelligence Agency officials who use it to fire Hellfire missiles on targets.
The CIA officials have bought software that allows them to match phone signals and voice prints instantly and pinpoint the specific identity and location of individuals. Intelligence Integration Systems, Inc., based in Massachusetts - sells a “location-based analytics” software called Geospatial Toolkit for this purpose. Another Massachusetts company named Netezza, which bought a copy of the software, allegedly reverse engineered the code and sold a hacked version to the Central Intelligence Agency for use in remotely piloted drone aircraft.
IISI, which says that the software could be wrong by a distance of up to 40 feet, sued Netezza to prevent the use of this software. Company founder Rich Zimmerman stated in court that his “reaction was one of stun, amazement that they (CIA) want to kill people with my software that doesn’t work."
Orwell’s World
Across the world, mass surveillance contractors are helping intelligence agencies spy on individuals and ‘communities of interest’ on an industrial scale.
The Wikileaks Spy Files reveal the details of which companies are making billions selling sophisticated tracking tools to government buyers, flouting export rules, and turning a blind eye to dictatorial regimes that abuse human rights.
at December 01, 2011 No comments: