The New Journalism: Get out the barf bag

The New Journalism: Get out the barf bag


Normally I don't read the newspapers at the library, especially if I don't have a bottle of Pepto Bismo handy. But since the bus driver thought the city bus might be on fire, and we all had to disembark, I found myself wandering through those menacing aisles at the downtown library.
Unfortunately, I picked up a copy of Indian Country Today and saw a revolting Playboy style spread in what was once a great newspaper that I worked for. ICT has hired a former Playboy editor as its editor and the newspaper is now worse than I could have ever imagined.

Quickly tossing that aside, I picked up the glossy magazine Native Peoples. In the first few pages, my vision was assaulted by an entire full page advertisement for the CIA.
There really could be no better case made for the degeneration of journalism, and the demise of Indian country journalism, than these two items.
Besides these forms of the plummeting of the integrity in journalism, there is also the new journalism offering unexpected nausea.

The New Journalism: Plagiarism and the 10 minute phone call
The new journalism is actually the old plagiarism. It is disguised at times with a 10 minute phone call, and a courtesy photo, or a stolen photo, but it is still plagiarism. It is easy to spot. Just type the key words into Google News or Google Web, and you'll see the original stories that the highly-paid thieves are plagiarizing.
Anyone, including preteens these days, can shoot a decent news photo with a digital camera or cellphone. If there's no photo, it is very likely that the reporter wasn't there. And if you think the newspaper is doing you a favor by using your photo for a coverup, without paying you, rethink this. If they have advertising, they are making money and you should be getting paid.


The Parasite: The armchair journalist
This is the reporter who sits in an easy chair and plagiarizes. Most of their time is spent trying to deceive you. First they want readers to believe they were actually out on a news story. Next, if you're one of their victims, they want you to know how lucky you are that they are writing about you. They spend more time spending their paychecks, acquired by stealing the hard work of others, than undertaking journalism.

The 'Bore Me to Death' Reporter
There's another type of journalist who is not hard at work these days. This one comes under the category of "Bore me to death." This reporter writes about the same topic, year after year, because they never leave the comfort of their home or office.

The Drive By
Yes, there's still non-Indians who drive out to Indian country once a week to write about how bad it all is. And thanks to the good ole boy editors, those hit-and-run reporters still capture headlines.

As long as people are preoccupied with the never-ending political corruption, they will not focus on the melting of the Arctic from the local coal-fired power plants, the depletion of the pristine aquifers, the poisoning of the rivers, or the young people who are being recruited to die in the bogus wars of corporations and politicians.
Don't kiss and tell
Editors, if you want people to be test cases for experimental drug research, or consent to strip searches by anthropologists, don't admit it.


The Sell outs
Finally, for the corporate media, we know the advertisers pay your salary. We know your bosses are afraid of the US and local politicians, and are either in bed with them or are having lunch with them.
We know they want you to cheerlead for drones at the borders, conceal the truth of Wikileaks and to shun the actions of protesters.
We know your editors want us all to be distracted, placated and hypnotized by non-news and Walmart shopping, and paralyzed by fear.
Why not put a disclaimer at the end of your article: 'Bought and paid for by ...'


Brenda Norrell, news reporter in Indian country for 29 years, is publisher of Censored News.
at December 21, 2011 No comments: 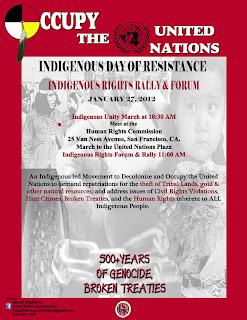 Friend Us On Facebook.com

View Our Educational Videos on You Tube at

TARSANDS: The "Tour of Resistance,” with support from Lakotas and other Native Americans, ends with demand for President Obama to reject Keystone XL without delay

Opponents of TransCanada Pipeline call for Americans to challenge Obama on campaign trail until he denies Tar Sands Pipeline permit
By Tour of Resistance
Posted at Censored News
http://www.bsnorrell.blogspot.com/

Ride endorser Paul Hawken, author of The Ecology of Commerce and Blessed Unrest, joined Weis in characterizing President Obama’s November announcement to delay a decision on Keystone XL until after the 2012 election as “dangerous.” Hawken joined the call for Obama to immediately reject TransCanada’s permit, or be challenged on the campaign trail until he does. “If America does not draw the carbon line in the Athabasca tar sands, then the question is: who are we, and why are we here? Of all the environmental follies that have occurred in time, surely this is the greatest."

“President Obama has shown zero leadership on Keystone XL,” stated Tom Weis, President of Climate Crisis Solutions. Calling for Americans to relentlessly challenge the president on the campaign trail until he rejects TransCanada’s presidential permit, Weis said, “Keystone XL is not only un-American, it is a direct threat to our nation. Every day the president fails to deny this pipeline permit, he is failing to protect America and her people. He must be called out on this.”

Texas landowner and founder of Stop Tarsands Oil Pipelines, David Daniel, who has been fighting TransCanada for more than three years, called the pipeline project “illegal, unregulated, untested, and a gross human rights violation with no public use justification.” Daniel said, “My message to every politician, from President Obama on down, is if you plan to put my family’s life and water at risk by supporting this pipeline, you need to be the first one to step foot on my property to try to take it.”

Nebraska fourth generation rancher, Teri Taylor, who met with Weis during the ride to share how the fight against TransCanada has totally consumed their lives, said, “Keystone XL is not right for America. It puts America in danger.” She appealed to President Obama as a mother and a grandmother: “Deny this permit for your daughters and my grandchildren.”

Port Arthur resident Hilton Kelley, who received the 2011 Goldman Prize for fighting to protect his fence line community from the dangers of surrounding oil refineries, said, “The people of West Port Arthur have suffered enough. We cannot tolerate the additional toxic emissions Keystone XL would rain down on our community. Poor people also have a right to clean air and water.” The U.S. EPA has openly criticized the U.S. State Department for not fully assessing the potential impacts of increased refinery emissions on the community of Port Arthur and its air and groundwater. TransCanada’s Keystone XL pipeline could transport up to 830,000 barrels a day of toxic tar sands slurry to be processed in Gulf Coast oil refineries.

"President Obama faces a truly historical moment,” said Oglala Lakota matriarch and 2011 Indigenous Woman of the Year award winner Debra White Plume. “The world will soon see if he caves in to the tyranny of big oil, or if he is a sensible human being with a heart on fire for life, for the future generations. I hope he denies the permit right away, as game over for big oil, and the first stroke of painting a beautiful path for our generations to walk on."

Endorsers of the “Ride for Renewables: No Tar Soil On American Soil!” include Daryl Hannah, Lester Brown, Ed Begley, Jr., Paul Hawken, Patagonia and others. For more info: rideforrenewables.com.