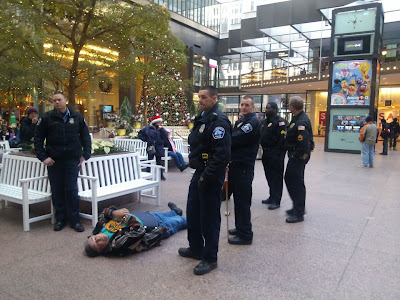 It's interesting they waited until Mr. Bellecourt was alone to arrest him. What were the police afraid of? I think we all know the answer to that. Also, isn't it Mr. Bellecourt's constitutional right to protest peacefully (First Amendment to the Constitution)? It seems to me as if the United States government, along with their military police state, bend the rules in order to control those they feel a threat to their so-called "power over the people."

Has Clyde been released?

There is no seeming like to it.It is a police state. To arrest a 75 yr old man having a coffee and accusing him of an unlawful assembly is as about as cowardly an act for law enforcement as therer is.