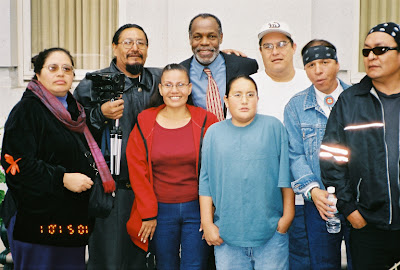 Hello Benda, a smoke signal from Indigenous Nations Network. This is a photo from Oakland, Calif., in 2002 I believe. Myself William Underbaggage, Danny Glover and the All Nations Drum group, Ballenger Family, Gilbert Blacksmith Medicine Warriors Dance Troupe and Bay Native Circle DJ Janeen Antoine. We were at a rally to support Rep. Barbara Lee of California. Rep. Lee was the lone dissenting voice against the Iraq war. I was honored to do an opening prayer and the All Nations Drum did and honoring song for Rep Lee. at the Frank Ogawa plaza. Willie Lone Wolf was a member of All Nations Drum. Danny Glover gave a speech denouncing the Iraq war. In 2007, I lost a nephew in Fallujah , Iraq Lance Corporal Brett L. Lundstrom, Lone Eagle, his younger brother Ed Lundstrom Jr. came home from Afganistan to bury his brother and went back into battle. Happy Memorial Birthday Willie Lone Wolf