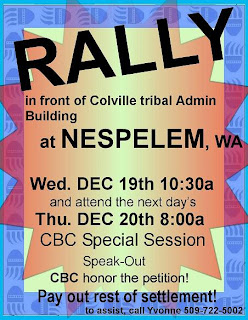 Justice for Colville members:
2,606 signatures on a petition to the Colville Business Council asking them about $96 Million

Scroll down for Dec. 13, 2012 statement
(Dec. 9, 2012) Tomorrow morning Colville tribal elders and members will gather at the Administration building at the Colville Indian agency campus at Nespelem, Washington to deliver a Petition bearing 2,606 signatures asking the Business Council once again for the remaining 50% of $193 Million claims Settlement.

This action is a culmination of an on-going 10-month attempt by tribal members at convincing the Business Council to provide a proper forum to answer their questions, listen to their concerns, and adequately include them in the decision-making process over this important subject matter.

Considering the contempt and disregard for their rights in the past months, it is unknown what exactly will take place tomorrow. Members are rightfully upset.

by tribal member Yvonne L. Swan December 9, 2012
Until February 2012 not every member of the Confederated Tribes of the Colville Reservation knew that in 2005 former Business Council members filed a claim known as CCT v. Kenneth Salazar, Secretary of the Interior, et al, through US District Court, No.: 1:05-cv-02471-TFH for the Bureau of Indian Affairs’ mismanagement of the Tribes’ natural resources and, to date, tribal members are still trying to understand how this came about and how the Business Council reached an out-of-court compromise that granted the members of the Confederated Tribes of the Colville Reservation $193 Million.

Members first learned about the claims settlement one afternoon at the end of February when the then Chairman of the Business Council, Michael O. Finley, received official news of the $193 Million settlement and happily began spending the money by granting all tribal employees a 2-hour Administrative Leave with pay.

Instead of calling the members together to discuss this issue in a General Membership meeting as they were accustomed to in the past by considerate former tribal leaders, Finley began communicating plans for the money to the members through the news media. In late February he issued a press statement that was carried in the Omak Chronicle as “Tribe settles trust suit” on February 26, 2012 written by Dee Camp and that is how members began hearing of it. Time went by and still there were unanswered questions.

Then on April 11, 2012 the U.S. Department of the Interior through Secretary Salazar and Attorney General Holder issued a News Release announcing the “1 Billion Settlement of Tribal Trust Accounting and Management Lawsuits Filed by More Than 40 Tribes”. Contacts listed on the News Release were Adam Fetcher, (DOI) 202-208-6416; Department of Justice, 202-4114-2007.

Tribal members were dissatisfied with the Business Council decision and were upset that they were not getting complete and truthful information, so in May they started a petition drive asking the Business Council for another 30% of the Settlement. The petition in circulation also asked that the issue be put to a Referendum Vote. In the months of June and July the Business Council boycotted meetings to avoid answering questions and continued to scare the members with the threat of imposed income tax by the U.S. and interruption of their Social Security and other assistance like Temporary Aid for Needy Families. The scare tactics prevented some members into not signing the petition. The members wanted the Business Council to call a General Membership meeting for discussion and they refused. On July 4, the members met at the Nespelem July Grounds and the petition drive continued. It was turned in to former Business Council member Ricky Gabriel who was then Chair of the Tribal Government Committee. The count of the signatures took several days by the Elections Committee and signatures totaled 1,706.

Gabriel took the petitions to the Business Council meeting at Nespelem Community Center along with a Recommendation sheet for a vote on July 12th and, prior to the swearing in of the newly-elected Business Council, they voted to accept it and to set up a Referendum. In August the Referendum passed and each member received another $6,000 of the Settlement. Wait…

…not every member received $6,000. Some members received the whole amount, some a portion of it, and some, including elders, received nothing at all. The Business Council was upset over having to give the members another 30% and told tribal programs that included Tribal Court and Colville Indian Housing Authority to hold money owing them by tribal members.

The members argued this to no avail and another Petition was drawn up asking the Business Council for the remaining 50% which would bring the total disbursement to the membership to 100%. Many members felt the 100% distribution should have been done in the first place insisting that claims monies belong to the entire membership, not just fourteen elected Business Council.

Members felt the holds on some of the members’ share of the Settlement was arbitrarily unjust and by October a total of 1,393 signatures were collected. Although this was less than the signatures formerly acquired the people sent a delegate to present them to the Business Council’s Tribal Government (TG) Committee. This time the people had to face a new Chairperson Luana Boyd Rowley who was not so accommodating. In fact, the day before the Thursday, September 27th TG meeting the member delegated to present the Petition was taken off the agenda.

The delegate tried to find out the reason she was bumped to no avail so, on the day of the TG Committee meeting, she arrived in chambers at ten minutes to 9:00 a.m. before the meeting was to begin and attempted to give the Petition to Boyd-Rowley. In front of eight (8) other Business Council members and an elder, Boyd-Rowley became upset and refused to take the Petition. When the delegate tried to explain that the Petition she was carrying were voices of several members Boyd-Rowley still refused to take the papers.

The delegate told Boyd-Rowley that by her refusal to accept the Petition she was committing political suicide and Boyd-Rowley angrily shouted at the tribal member asking “Are you threatening me?!” and ordered a secretary to call the police. The tribal member was attempting to conduct tribal business which was her right according to the CCT Constitution and was wrongfully blocked. Further, not one of the other Business Council members intervened.

The delegate left Business Council chambers peaceably and met a tribal officer outside and gave a statement along with the witnessing elder and in front of a former Business Council member who was delivering more signatures for the Petition. To date, the police report has not been given to the delegate or the elder. After they left, the Business Council went into closed session.

Since the Chair of the TG Committee blocked her, the delegate took the Petition bearing 1,393 signatures to the annual General Membership Meeting on Saturday, October 13th and in the afternoon handed them to the new Business Council Chairman John Sirois. In front of at least 50 witnesses he and Business Council Secretary N. Lynn Palmanteer-Holder apologized to the delegate for TG Committee Chair’s ill treatment. However, on a Recommendation Sheet immediately drawn up to accept the Petition was voted down.

Days later another member called Management & Budget Chair Billy Nicholson and realized the number of signatures (1,393) was not nearly equal to 1/3 the number of eligible voters at the last election and during the discussion was led to believe that, if more members signed the Petition, it could be turned in for approval by the Business Council. Thus, circulation of the Petition for the remaining 50% was resumed.

In early December tribal members were satisfied they had well over their goal of getting 900 more signatures, thus bringing the total to more than the overall goal of 2,400 signatures and decided to submit the Petition to the next scheduled TG Committee meeting; but, when the delegate filled out the application to get on the agenda for the upcoming Thursday, December 13th TG Committee meeting Luana Boyd Rowley denied the delegate’s request.

As of now, we have a total of 2,606 signatures which is more than 1/3 of the number of eligible voters at last June’s General Election and so as not to be chased away by the TG Chairwoman, we plan to approach the Business Council during Special Session tomorrow.

To the Office of the Reservation Attorneys, through the news media, on behalf of Colville Indians for justice.

In light of precedents set by former Colville Business Council who in the 1950s and 1990s immediately informed tribal members of claims settlements, called general membership meetings, and in the 1990s put the issue to a vote, I and other elders expected this example to be followed by current Colville Business Council regarding the recent (2012) $193 Million claims settlement.

Also in the light of the above-mentioned decisions by leaders of the governing body of the Confederated Tribes of the Colville Reservation we elders had questions of the Business Council as to why we were not given a general membership meeting and why we were told through the news media that we would get only a portion (20%) of the money.

Our questions went unanswered and we elders endorsed the petition launched by younger tribal members asking the Business Council to disburse another portion (30%) of the funds.

In August 2012, when the majority of votes in the ensuing Referendum were for the 30% disbursement, we elders were appalled that the Business Council gave tribal programs the authority to withhold money from tribal members responsible for certain debts. Such holds were to be put on their share in the 30% disbursement.

These holds placed against the members’ share of the claims settlement were held without fair notice which brought hardship on elders and other members. They also went against the previous precedents set by tribal government leaders and were not acceptable to us.

Therefore, we not only sanctioned the initiation of another petition, this time for the remaining 50% of the claims settlement money totaling 100% distribution to the members, but we helped circulate it and present it to the Business Council in two parts on October 13, 2012 and December 10, 2012.

We do not accept another news release (December 10, 2012) issued by the Business Council as a response to our petition, and we reiterate on behalf of all who signed that we want full distribution of the rest of the $193 Million claims settlement.

In the spirit of inherent rights as shareholders of the Colville Reservation,
at December 14, 2012

When some of us rallied for what was rightfully ours, we were called "Greedy" and "Haters"!