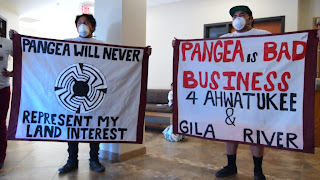 AHWATUKEE, Ariz. -- On Friday, December 7, a group of 17 people from the Gila River Indian Community (GRIC) and from the Phoenix area held an anti Loop 202/anti-Pangea rally at the Ahwatukee Foothills Chamber of Commerce Public Policy meeting. Pangea was in attendance to present its “City Concept” which centers on developing almost 6000 acres of Gila River land south of Pecos Road. Protesters came to challenge the merit of the plan due to lack of transparency from Pangea, as well as to counter their misleading campaign that Pangea will save South Mountain, and that their massive city would bring economic and cultural prosperity to all GRIC members.

The group held banners that read “Pangea is Bad Business for Ahwatukee and Gila River” and “Stop Pangea, Save Our Future." The banners spoke to Pangea's failure to meet any of the terms of an 11-point legal review of its land use plan, which was delivered to Pangea by the Gila River tribal council on October 17, 2012. Protesters distributed copies of the tribal council's official motion to members of the Chamber of Commerce, to inform Ahwatukee residents of the public health threats that Pangea's city would usher in, and that No Build is an option. 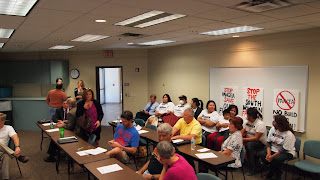 “I was really happy to see youth from the community come out to the city for this demonstration against Pangea and the Loop 202. But I was really happy that the Protecting Arizona’s Resources and Children (PARC) were also in attendance speaking out against Pangea and the 202 with us,” said Justin Webb from Gila River, Goodyear Village. “I think PARC opposition will encourage community members to take a stand against the Loop 202, and their similar perspective is good for the community to see”.

Two members from PARC were in attendance and spoke out against Pangea’s City Concept plan. “I was really glad to see the Gila River members speaking to Ahwatukee community members. This affects all of us. We need to stand together.” said Pat Lawlis, the president of PARC. “People from both Gila River and Ahwatukee need to know, No Build is an option.”

Despite the concerns expressed by both communities, Pangea’s spokesman Joey Perez presented their City Concept plan, and cited repeatedly that No Build was not an option. Perez explained that no one has any say in the transportation corridors required by the North American Free Trade Agreement (NAFTA), namely the CANAMEX Corridor which would run from Mexico, up through Arizona all the way to Alberta, Canada.

“I am outraged to hear Pangea cite NAFTA and CANAMEX as their justification that the freeway is going to happen. I feel my future and children’s future is endangered by such plans, especially since our community is against the level of development the Loop 202 would bring,” said Andrew Pedro from Sacaton. “I encourage community members and tribal leaders to look into CANAMEX and NAFTA, so we can be informed of the ramifications these projects represent, so we can fight it."

The Gila River Indian Community voted on the No Build option for the freeway in February 2012. However, Pangea, regional transportation planners, and the Arizona Department of Transportation continue to threaten the public health, environment and cultural heritage of Gila River. Protesters from Gila River came to Ahwatukee to represent the No Build voice of their community, and called upon tribal leadership to publicly stand with them.

Gila River leaders have not yet publicly advocated for No Build.

Overall protesters were pleased to meet and share info with members of the chamber, and look forward to working together against the Loop 202.

Ana Morago, one of the many youth from Gila River said, “It was good to see people from Ahwatukee on our side, and that together we made an impact showing that the O’odham choice was No Build."

For more information on 202 resistance please contract us at:
gricagainst202@gmail.com
www.gilariveragainstloop202.wordpress.com
at December 08, 2012