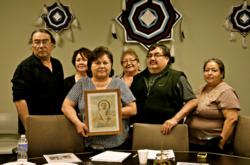 RAPID CITY, S.D. -- December 04, 2012 -- The South Dakota Indian Child Welfare Act directors' congressional report, yet to be published, is titled "Reviewing the Facts: An Assessment of the Accuracy of NPR's 'Native Foster Care: Lost Children, Shattered Families.'" The study was written with assistance from the Lakota People's Law Project, a nonprofit law firm and public policy advocacy organization based in Rapid City, SD and Santa Cruz, CA.
The Standing Rock Sioux Tribe of South Dakota is sending the ICWA Directors' Coalition report to all nine SD Sioux tribal councils for their endorsement, along with a companion report on the possible over-prescribing of mental health drugs to Native children in foster care. All of the signers will then forward the reports to Congress.
The ICWA directors' study was prepared in response to letters sent to the Department of the Interior by six congressmen after a Peabody Award-winning NPR series that aired in late October 2011. The NPR exposé criticized South Dakota's Department of Social Services for violating ICWA, partly as a way to bring federal money into the state.
The congressional letters demanded to know if NPR's reporting was accurate. The congressmen also wanted to know, if the reporting was accurate, if South Dakota was merely misreading ICWA or intentionally disregarding it. Finally, the congressmen asked how the Bureau of Indian Affairs planned to remedy the damage and make certain that systematic violations of ICWA did not continue, if the system was broken. The Bureau of Indian Affairs wrote back to the congressmen, pledging to host a summit on Lakota foster care in early 2012. The summit never happened.
Due to this inaction, the ICWA directors announced their own response: "To date, the promised summit has not occurred. Furthermore, the House members' request that the Department of the Interior confirm or refute the claims made by NPR has not been honored. In light of this, the ICWA directors from South Dakota's nine reservations have met to respond to the congressional inquiry."
Six of the South Dakota's nine ICWA directors participated in the meeting on Thursday and voted unanimously to approve the reports and forward them to the nine tribal councils. The six voting directors were: Terry Yellow Fat (Standing Rock), Juanita Scherick (Pine Ridge), Raymond Cournoyer (Yankton), Dianne Garreau (Cheyenne River), Evelyn Pilcher (Sisseton), and Celeste Honomichl (Flandreau). The ICWA directors' meeting was reported on by NPR the following day, Friday December 1, on "All Things Considered" and by the Associated Press.
During the meeting, ICWA director and host Raymond Cournoyer said, "We fight against the state every day. They have the money, power, and attorneys. Our ICWA directors have a small staff but we never give up."
The meeting was also attended by Yankton Sioux Tribal Council Vice Ida Ashes. Ms. Ashes said to the ICWA directors, "Represent the tribe. Get in there. Don't let attorneys or judges tell you what ICWA is about because you're the ones who know. Those are your children. Stand up for them."
A Lakota grandmother from Standing Rock named Ilene Brown attended the meeting as well. She had two grandchildren taken and kept by the D.S.S. despite her efforts to gain custody of them. Ms. Brown read aloud a letter of support for the congressional reports written by Standing Rock Tribal Council Chairman Charles Murphy: "Compared to non-Indian agencies that have operated child welfare programs in Indian communities for decades, current literature clearly indicates that tribes are best equipped to develop solutions and provide culturally responsive services to their families.
"The Standing Rock Sioux Tribe supports change in the administration of the child welfare system that will allow the Standing Rock Sioux Tribe to build the adequate institutional, governmental, and community infrastructure needed for a comprehensive tribal welfare system."
In addition to voting to submit the assessment of NPR's reporting to Congress, the ICWA directors decided to send to Congress a supplementary report (also unpublished) about the possibility of over-prescribing by D.S.S. of pharmaceutical medications to Lakota children inside the foster care system. This supplemental report was also prepared with the assistance of the Lakota People's Law Project. Mr. Yellow Fat, the current chair of the ICWA director’s coalition, said "The Standing Rock Health, Education, and Welfare Committee wants the supplement to go out immediately."
The Lakota People’s Law Project has been partnering with tribes and leaders in South Dakota since 2005 from its office in Rapid City to challenge more than 150 years of injustice against Native American families. These activities have included funding and supporting Native experts to provide technical assistance to the tribes on family and child welfare issues. The Lakota People’s Law project combines public interest law, research, education, and organizing in a unique model for advocacy and social reform.
The Lakota People's Law Project is sponsored by the non-profit Romero Institute based in Santa Cruz, California. The Institute is named after slain human rights advocate Archbishop Oscar Romero of El Salvador. The Institute seeks to identify and dismantle the structural sources of injustice and threats to the survival of our human family.
Posted by Censored News, publisher Brenda Norrell at December 04, 2012