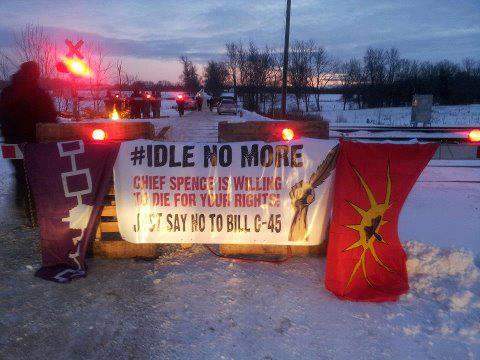 by Kenneth Jackson and Jorge Barrera
APTN National News
About three dozen Mohawks from Tyendinaga blocked the main rail line between Toronto and Montreal for several hours Sunday in support of hunger-striking Attawapiskat Chief Theresa Spence and the Idle No More movement.
The move forced CN to suspend all rail traffic along the line.
The blockade stranded about 2,000 passengers, said VIA Rail in a statement to media.
This was the same rail line, between Belleville, Ont., and Napanee, Ont., shut down in 2007 for almost 12 hours by the Mohawks as part of a planned national day of action.
“It’s not about you and it’s not about the Mohawks it’s about Chief Spence and everyone else dying,” said Tom Maracle, a Mohawk from Tyendinaga, at the blockade.
Maracle, however, issued a warning.
“This is peaceful. The next one won’t be,” he said.
A fire was keeping the blockaders warm. The blockade was launched at about 4 p.m. local time. OPP arrived on the scene at about 8 p.m. The blockade was expected to end sometime late Sunday evening.
CN spokesman Jim Feeny said CN had suspended all rail traffic until the blockade ended.
“This is the main line,” he said. “It is a heavily used line…We are hoping that the issue can be resolved and that traffic can be resumed as quickly as possible.”
kjackson@aptn.ca
@afixedaddress
jbarrera@aptn.ca
@JorgeBarrera