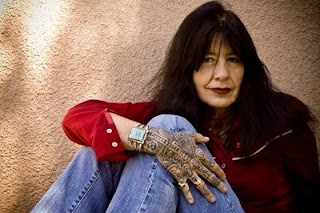 I didn’t know about Joy Harjo until she had crossed the picket line.

I didn’t know that a “human rights supporter” (her words) would dare to write “I didn’t know about the boycott [of Israel]”.

I didn’t think anyone associated with the struggle for universal human rights would be able to ignore a military assault on an urban area where 1.6 million people are trapped and unable to flee to safety when advanced technology weapons are targeted at them.

I didn’t think there were people so hypocritical that they could continue with a concert for the nation which has just killed more than 30 children in Gaza in “self-defence” and then write “I have always stood in support of human rights, and the Palestinian cause has always been close to my heart.”

“I didn’t know”. History has heard that excuse before. From the Germans who didn’t know what the Nazis were doing. Or the English that didn’t know that four million Irish were dying of starvation even as food was still being exported from the Emerald Isle. But it sounds particularly lame in the 21st century world of instant communication when the last Israeli full scale assault on Gaza was only a couple of weeks ago.


I sit in a hotel room in Tel Aviv. I am far from my tribal home in Oklahoma. In eternal time, each is a room in the same heart.

I was invited to perform and speak here at Tel Aviv University several months ago. I was a guest here nearly twenty years ago and remembered this place with a great fondness. I recalled the open discussions and the cultural mix of students. I accepted the invitation.

I am aware of the nearly unbearable political strife here. These lands are in the heart area of this Earth. The Jewish people consider these lands their homelands. They have survived countless persecutions and suffered as they made their way home. The Palestinian people are captive in their own homes. There are checkpoints to enter and leave. They do not own title to a country. They are not free. This situation is much like that of my people. We were force-marched from our homelands. Then our lands of resettlement were stolen again.

I am not so naïve as to think art is beyond politics. The arts are and have been used in the regeneration of the spirit of the people. They carry blood, memory and cultures. The arts can also be co-opted for political gain or loss. I am in the service of the source of the poetry and music. With that spirit there is no bargaining with governments, religions or ideologies.

The morning after I left on my journey I received an email from a friend and colleague. He asked me to reconsider my trip. This was the first I learned of the US Campaign for the Academic and Cultural Boycott of Israel. I was puzzled at this request at such a late hour because this colleague had known of my plans to go to Tel Aviv for while.

I came here for the opportunity to speak with and hear the voices of the people, especially the young. I came to be in support of justice and compassion. I don’t believe that the majority of the people in these lands or anywhere in the world are in support of the killings. Now my social media pages and message boxes are filled with a campaign to force a boycott, with messages of polarization, as if there is one way to poetry, resistance or empowerment. There are also messages of support.

I will never forget being on stage the opening night of a large poetry festival in Durban, South Africa. Then U.S. President George Bush was bombing the Gulf and everyone hated the Americans. Each participating poet was given an elaborate introduction, except for me. I was introduced: “This is Joy Harjo. She is an American.” The heavy silence that followed was filled with hate. I was an object of contempt no matter what I sang or what I said for the rest of the conference. I was not in support of the killings on my behalf by the U.S. government. I had actively opposed them, but in the collective audience mind, I was implicated.

I feel that same atmosphere of censure now in the ultimatum that I am being given to boycott. I admire and respect the scholars and artists who have backed the boycott. I stand with their principles, but they will not see it that way.

I refused an invitation to the White House because I disagreed with George W. Bush and his politics. I stepped down from a tenured university position with security and benefits to register my disapproval of unethical practices involving a colleague and students and the persecution of other faculty members who objected. I have always stood in support of human rights, and the Palestinian cause has always been close to my heart.

I will perform at the university as I promised, to an audience that will include Palestinian students. The students have written in support of me being here. I will let the words and music speak for that place beyond those who would hurt and destroy for retribution, or to be right. It is my hope that my choice will generate discussion and understanding for many paths to justice.

Submitted by Ali Abunimah on Mon, 12/10/2012 - 18:06
http://electronicintifada.net/blogs/ali-abunimah/rejecting-palestinian-calls-native-american-poet-joy-harjo-entertains-apartheid
Despite appeals from thousands of people all over the world, Native American peers, and Palestinian civil society, poet and musician Joy Harjo has rejected pleas to cancel her performance at Tel Aviv University and respect a Palestinian call for boycott. Read more

News article excerpt
Joy Harjo posted early this morning on her Facebook page that she was boarding a flight to Tel Aviv, which alerted activists and colleagues about her trip.
“Joy is a valued friend and colleague, but I disagree with her decision to go to Tel Aviv to perform. I regret not reaching out to her sooner in this regard, which might have changed her mind,” Robert Warrior, Director of American Indian Studies at the University of Illinois at Urbana-Champaign, told The Electronic Intifada.
Warrior, who is founding president of the Native American and Indigenous Studies Association, has himself signed on to the call for academic and cultural boycott of Israel.
“I speak out publicly opposing the occupation whenever I get the chance,” Warrior said, “I have been to Palestine twice, and I was a student of Edward Said. Opposing the occupation is among my most important causes.”
Born in Tulsa, Oklahoma, a member of the Mvskoke Nation (also known as Muskogee Creek), Joy Harjo has been nationally and internationally acclaimed for her cultural and political contributions, especially her feminist writing, dating back to the 1970s. She has received numerous awards for her work.
In the video above, Harjo performs, “I Give It Back: A Poem to Get Rid of Fear.”
Harjo unaware of boycott
Given that she was en route to Tel Aviv, Harjo had not responded to an email asking for comment, but soon after landing she posted this message on her Facebook page:
I didn’t know about the boycott until it was too late. My trip was posted here for a month. A person made it their campaign to question my integrity and notify others without speaking with me. I am a Mvskoke person living on occupied lands. I am in support of human rights. My music and poetry take me into the world to speak and sing a compassion that is still beyond me. I am learning yet. Mvto cehacares.
Read more
http://electronicintifada.net/blogs/ali-abunimah/acclaimed-feminist-author-musician-joy-harjo-lands-tel-aviv-find-boycott-calls

Native American poet and musician Joy Harjo is scheduled to perform at Tel Aviv University on Monday, December 10. SIGN HERE TO ASK THAT SHE HONOR THE INTERNATIONAL ACADEMIC AND CULTURAL BOYCOTT OF ISRAEL.
It's time to take a principled stance in support of Palestinian human rights being violated by the Israeli state's colonial occupation and apartheid regime. Palestinian civil society has called for the international academic and cultural boycott of Israel. This is an institutional boycott responding to the call to join the Boycott, Divestment, and Sanctions (BDS) movement. http://www.change.org/petitions/joy-harjo-cancel-your-show-don-t-perform-for-israeli-apartheid?utm_campaign=new_signature&utm_medium=email&utm_source=signature_receipt#

More in the news
http://www.bikyamasr.com/82909/bds-activists-call-on-joy-harjo-to-cancel-israel-performance/
at December 10, 2012