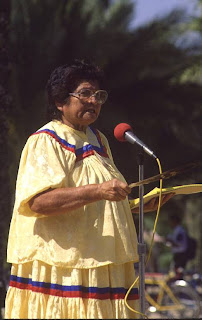 Apache Elders mourn loss of Spiritual Leader Ola Cassadore Davis
SAN CARLOS, Ariz. – Apache tribal elders in southeastern Arizona expressed the loss of a well known Apache spiritual leader, Ola Cassadore Davis, who entered the spirit world on Nov. 25 when she was 89 years old.
With tears coming down her cheeks, 80 year-old, Gladys Longstreet Hinton, said in her native Apache language, “We are surely going to miss our friend and relative, Ola!  She was related to my late husband, Henry Hinton, Sr., and we come from families that are spiritual leaders within our communities.”
“Her late brother, Philip Cassadore, was also a spiritual leader and Ola took on many responsibilities of her brother in helping protect our Apache traditional way of life.”
“She had a wonderful spirit.  She was kind and she was very compassionate.  She always thought about other people, especially our Apache people here.”
“She had a special gift and that was to bring people around her.  She had a beautiful personality and she was always nice, no matter what.  She participated in our traditional ceremonies and she always spoke up to protect our sovereign rights and especially to protect our culture and sacred sites.”
“She always had a smile on her face, no matter what time of the day you saw her.  She always encouraged our youth to pray and ask our Creator to watch over all of us and for them to live to become elders.” 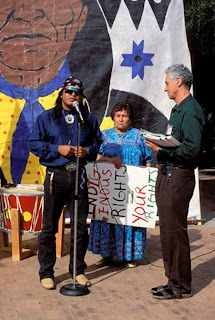 “When I had my coming of age ceremony at the Men’s Club in Bylas, my late father, Jeff Longstreet, he was the head Apache Mountain Spirit Dancer, and he prayed for me.  He told me I would live to be an elder and today I am 80 years old and this is the kind of prayers that Ola had for our people, all of them, the young and the old.  Every day, all year round, our spiritual leaders, they are always in prayer and asking our Creator to watch over us.”
“She was one tribal elder and spiritual leader that was not afraid to speak up when our inherent rights were violated.  She was very vocal and she made her point.  She was always standing up to the White People and reminding them that they took away a lot of our land and they were trying to make us like them.”
“She was an avid fighter and we are going to miss her visiting us in our communities.  I appreciate all her help and her husband, Mike, who always stood by her side and helping with whatever he could to help our Apache people.”
Chesley Wilson, Sr., spiritual leader, actor and artist within the Bylas community, added in his native Apache language, “I remember all the fights that Ola had when it came to protecting our sacred sites, especially at our holy Dzil Nchaa Sian, Mount Graham is what they call it.”
“She had gatherings on top of our sacred mountain and we always were in prayer and we all prayed for the eternal existence of our Apache culture, our songs, our prayers, our language and for our people.”
“I lived in Tucson for many years and that’s when I got to know Ola and her husband, Mike Davis, pretty good.  They were always ready to stand guard in protecting our Apache way of life.  She was always full of energy.  She could talk.  She could sing.  She could sure say strong words in protecting our Apache people.”
“She was not afraid to speak up to the University of Arizona, who was the one that started the telescope project on top of our sacred mountain.  She was not afraid to speak against the Vatican because they are the ones that donated all kinds of money to build the telescopes on our sacred mountain.”
“She will always be remembered for her commitment and true dedication to help our Apache people.  She was a kind woman and prayed for many people.  She will be greatly missed.”
Shera Day, god-daughter of Ola Davis, pointed out, “I was so fortunate to have been a god-daughter to Ola.  She was a good example for me and she always encouraged me to finish school and get a career.  Like she did, I became a nurse and now I am helping children with respiratory care and it was because she set the path out for me to follow.”
“I remember she came out with my god-father, Mike Davis, the day they came to Bylas after my family had given her with a stone and eagle feather and asked her to become my God-mother.  She stood there as our family presented her with gifts and she said she didn’t bring any gifts and she was surprised and said she didn’t bring any gifts to exchange.  But to me, that didn’t matter, because having Ola Cassadore Davis as my God-mother, was truly the greatest gift to me.”
“I will miss her and her sweet ways.  When I was in Afghanistan, she told my mother that she was praying for me and that I would return safely from the U.S. Army and rejoin my family and to be sure and come and visit her.”
“When I returned back to the United States and made my way back to our Apache reservation, I visited with her and Mike at their trailer in the Peridot District.  She cried and held me close to her heart and told me that she prayed and I could come home safely and to come and see her.”
“She fought for the rights of all indigenous people, not just for Apaches.  She was a brave Apache woman.  She was not afraid at all.  She was loved by many people and she made many friends.  I looked at pictures of her.  She traveled through America and even to Europe in fighting for our rights as Apaches.  There was the one that I liked of her when she went before the National Congress of American Indians convention during the time when President Bill Clinton was first sworn into office in Washington, D.C.” 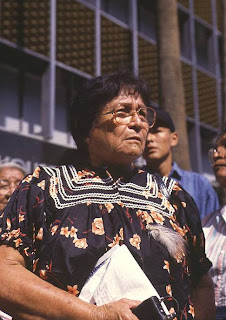 “She spoke before the NCAI and she had them pass a resolution to stop the additional $10 million funding that the University of Arizona was trying to get to build more telescopes on top of Mount Graham.  Sure enough, after that resolution was passed, President Clinton did veto the bill.  She helped make history that day and she never gave up and these are the teachings that I am passing on to my children.”
“She always showed respect to our tribal leaders and I know that she prayed for my uncle, Terry Rambler, who is the Tribal Chairman of the San Carlos Apache Tribe.  Just as our leaders tell us, she always stressed the importance of keeping our Apache culture alive by speaking it, singing it and praying for its survival.”
“That was the kind of fighter my god-mother, Ola Cassadore Davis, was and I will always remember her and treasure the time that I had a chance to spend with her.  Thank you, God-Mother, may you rest in peace and my sincere condolences to the Cassadore and Davis families.  She brought a lot of pride, love and wisdom to us,” concluded Shera Day.
Ola Cassadore Davis is survived by her husband, Mike Davis, two sons, 4 daughters, 14 grandchildren and one sister, Pansy Cassadore.
“I want to say thank you to everyone that helped us during this time and for all the donations, songs and words that people expressed to us,” pointed out Pansy Cassadore.
“Thank you to all the friends of the family that came like Sky Crosby and Roger Featherstone from Tucson,  Dr. Robin Silver from Flagstaff, Dr. Elizabeth Brandt from Phoenix, Keith Basso from Show Low, Lawyer Michael Nixon from Oregon, our Peridot District Council and former Tribal Chairman, Wendsler Nosie, Sr., and Terry Rambler, our present Tribal Chairman and many others.”
“She was the last Chairperson of the Apache Survival Coalition and we will all miss my beloved sister, Ola,” concluded tribal elder, Pansy Cassadore.
Ola Cassadore Davis was laid to rest on Dec. 1st, on her beloved San Carlos Apache Indian Reservation in San Carlos, Arizona.