MNN. Dec. 25, 2012. Prime Minister Harper has declared war! Gear up for liberation! For hundreds of years we Indigenous People of the Western Hemisphere have seen the enormity of destruction of our land and lives by foreign occupiers. They placed us under economic sanctions. We always resisted.

Our right to protect human life is absolute. Harper is a political assassin for deliberately legislating C-45 to enhance the deplorable living conditions of our people. Letting hunger striker Theresa Spence of the Cree Nation die in her tipi in Ottawa is murder. She has a legitimate right to express herself as she sees fit. He is no different from a Nazi war criminal, trying to weaken her fight against injustice. Her death would prove he is an “Economic Hit Man” for the corporations. She is responding to the economic and political strategies that are brutalizing her northern community of Attawapiskat. Her life is the only weapon she has to defend us from the enemy’s continuous attack. 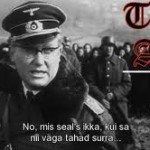 Many feel the least Prime Minister Harper can do is to visit Spence to tell her he doesn’t want her to die. Otherwise his position is provocation. The war against started the day the foreigners arrived. Aggression is through outright killing and administering a program of genocide. Police, courts, unemployment. We are characterized as enemies, demons, sub-humans.
We have a right to resist annihilation, to struggle as freedom fighters, to fight for self-determination, which is legal in international law. We want freedom and to fulfill our potential as individuals and social beings. We have no leaders. We will regain control of our usurped land and lives. Canada must lift their crippling economic sanctions, halt their systemic oppression, respect our inherent rights and better our living conditions as we see it.
Canada uses raw power on us. We were not consulted on the invasion of these foreigners. We have every right to resist the continuing effort to bring about our physical death, incursions, raids, arrests, threats, imprisonment, suppression of our economic activity and being denied our political rights.
We will derail Canada’s economy for selling our possessions to foreigners without our knowledge and consent. Our local businesses are raided and dissolved so we cannot have a livelihood to put food on the tables of our people.
Ordinary Indigenous People are using the internet to fire the most deadly assault weapon in the world – the truth. We are resistance. We are reasonable. The impact of the movement is coming home to roost. Harper’s corporate media is minimizing coverage, because “The Revolution Will Not Be Televised”.
Deploying soldiers would incur heavy economic and financial costs. Native police forces collaborate with them to monitor, control and threaten those who fight against imperialism. At a moment’s notice they can become the para-military ART Aboriginal Response Team [secret Indian cops].
The corporation of Canada cannot legally banish our right to protect our land, resources and people. We refuse the crumbs they throw our way for submitting to them. Oppression is heading out the door.
This is a war of the mind. We will struggle until the wrongs are righted. Canada’s reputation is being demoralized worldwide. It offers a secure and prosperous lifestyle for their fellow foreigners, all based on the theft of our possessions. Its white population is now a minority. Ignoring the high unemployment, Canada is bringing in outside slaves to work for very little without benefits. We won’t allow that. We are united and cohesive. Our anger has exploded. Their attack on us does not bring fear. It brings action. A new level of outrage and resistance is coming.
Canada prefers to negotiate with their compliant band and tribal councils they have illegally placed in our communities. They’re job is to make concessions on our behalf. These well paid traitors and their voters do not speak for us! Any so-called leader that does not express our legitimate aspirations will be cast side. Their councils, national, provincial and territorial organizations exist to help impoverish us and our communities.
Canada is calling us ‘terrorists’; ghettoizing us; imprisoning us and those who help us; and make false reports on us. Terrorists, a made up term, to withhold civil rights to unjustly deal with those who do not agree with their aspiration to rule the world.
US and Canada are controlled by the financial-media-military-industrial complex against the interests of the local Indigenous people. They are trying to keep us in a permanent state of dependence, it’s too late.
Artificial corporate powers are temporary and will ultimately collapse. The time has come to dissolve them. It is defunked, illegal and bankrupt. They owe everything they have to us.
Canada is a colonizing power, a direct violation of the UN Charter and international law. Canada, an indigent corporation, has no right on our land. They are not the natural inhabitants. Onowaregeh, Great Turtle Island, is inhabited by us, the Ongwehonwe. Foreigners are trying to exterminate our political, economic, social, educational, cultural, religious, historical and geographical existence. These make our resistance legitimate.
We are ready to put in a reign of justice and peace for the well being of mankind. We must do everything in our power to live and safeguard our children and those our Earth Mother is releasing to us in the future.

Our path to peace reminds us of the Beatles’ song, “The long and winding road that leads to your door will never disappear. I’ve seen that road before. It always leads me here, leads me to your door.”
MNN Mohawk Nation News kahentinetha2@yahoo.com For more news, books, workshops, to donate and sign up for MNN newsletters, go to www.mohawknationnews.com More stories at MNN Archives. Address: Box 991, Kahnawake [Quebec, Canada] J0L 1B0 Read Ellen Hunt in 1881, “A Century of Dishonor. On Your Hands is the Blood of your Relation”. http://www.counterpunch.org/2012/11/20/the-absolute-right-of-palestinian-resistance/