“We Watched Our Friends Die" 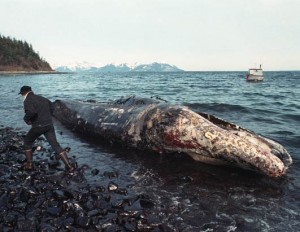 Alaska Tribal Coalition Vows to Fight Chemical Dispersant Oil Spill Response Enforcement
Press statement
The words of an Alaskan tribal elder, “We watched our family and friends die,” represent the feelings of many about the use of chemical dispersants in their waters. Thirty plus years after Exxon Valdez and three years after the BP Gulf oil spill, numerous scientific studies consistently reveal long-term, lethal effects of chemical dispersants used in oil spill response[i].  The toxic tolls on human health and sensitive ecosystems continue to mount--yet the use of chemical dispersants is still given preferential treatment by EPA and Coast Guard officials.


The Alaska Regional Response Team (ARRT), consisting of federal and state agency officials responsible for protecting and safeguarding Alaskan lands and waters, is ready to give the green light to chemical dispersant preauthorization plans being presented at their May 22 meeting in Valdez, Alaska.  Federally recognized tribal representation on this committee was abruptly retracted in 2008 effectively removing opposition to the preauthorization and dispersant use plans.

Fearing the ARRT’s dispersant plan approval, Alaskan groups and tribes led by the Alaska Inter-tribal Council (AITC) have begun enacting statewide, legally binding tribal resolutions opposing the use of chemical dispersant substances in oil spill contingency planning throughout Alaska.  With more than 200 indigenous tribes living in remote wilderness, many without grocery stores, and, who have no direct representation at the ARRT table, a decision to apply chemical dispersants to mitigate oil spills has untenable trade-offs impacting their fisheries and polluting their food and water sources.
While this tribal feud with federal agencies has been going on for years, a new player has joined forces with the AITC and their federally recognized members: the Lawrence Anthony Earth Organization (LAEO), a conservation group headquartered in South Africa whose founder is famed for entering war zones to save endangered species from extinction.  The coalition is a newly-formed regional partnership for Alaska—part of LAEO’s Change Oil Spill Response (COSR) Global Alliance initiative.  “The delicate balance and way of life for the indigenous peoples of Alaska is in essence under threat of extinction. We are offering a solution that makes it possible for industry, federal agencies, and the tribes to move forward in a way that all three groups can prosper and win,” said Barbara Wiseman, LAEO International President heading up the Alliance.
The AITC coalition of Alaskan tribal representatives and groups now formed as the Change Oil Spill Response Global Alliance Delegation will attend the ARRT meeting on Wednesday, armed with documentation and scientific studies supporting the complete elimination of chemical dispersants in Alaskan spill response. They will also deliver 18 Tribal Council resolutions currently in hand to the committee co-chairs: Mr. Mark Everett, U.S. Coast Guard, and Chris Field, EPA Coordinator. “We are taking a new tact, instead of just protesting and saying ‘no’, we will participate in the policy making process and offer constructive solutions to the problems oil spill response agency authorities face in this region.  Not only are we asking them to disapprove the preauthorization of dispersants in our waters, but we want more effective spill response plans and are bringing a solution to the table to replace their dependency on these toxic dispersants”, said Nikos Pastos, Environmental Sociologist and now acting spokesperson for COSR Alliance delegation.

Chief Michael Stickman of Nulato, International Chair of the Arctic Athabascan Council and a leading member of a newly established Arctic Council task force working to substantially improve procedures for combating oil spills in the Arctic, endorsed the Alliance formation stating: “Committing to clean up oil spills after they happen is insufficient. Precaution and nation-to-nation Tribal Government Consultation and free, prior, informed consent must be enacted before hasty implementation of a policy of pre-authorizing toxic chemical dispersants substances in oil spill contingency planning.  Why have less toxic bioremediation methods with a 20-year track record of effectiveness been ignored by the Alaska inter-agency Regional Response Team?”
Consolidated Alaskan Tribes have a straightforward demand -- they require clean water and healthy fisheries, which are critical to their survival as people living in an arctic environment. Tribes have treaty rights as sovereign nations and have considerable authority over what affects their ability to hunt, fish and sustain their lifestyles as Native Americans.  “Federal pre-authorization of toxic chemical dispersants coupled with the State of Alaska’s legally questionable water right permitting process could only be seen as a bold attack on the rights of citizens and tribes to protect inherent sovereign pre-existing and human water rights throughout Alaska.” -- Hal Shepherd - Executive Director, Center for Water Advocacy

“Giving free-reign-preauthorization for chemical dispersant application would constitute a malicious action that threatens the health, environment and subsistence use of our natural resources for future generations,” said Carl Wassilie--Yupiaq, Biologist with Alaska’s Big Village Network.  “The ARRT’s elimination of the indigenous people’s seat on their committee constitutes authoritarian rule with inherent human rights violations.”