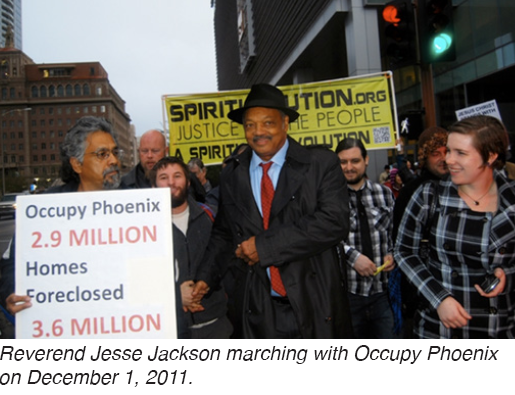 TUCSON – While violent crime soared in southern Arizona and the economy was collapsing, police were spending enormous amounts of time and money to spy on human rights activists, primarily by stalking them on Facebook and placing an undercover police officer in Occupy Phoenix, a new report reveals.
Phoenix based law enforcement were the pivot point of this circle focused on spying on human rights activists in southern Arizona. The Tohono O’odham Police and Tucson Police were among those tracking Native American human rights activists, including Navajos and Tohono O’odham. Read more: http://bsnorrell.blogspot.com/2013/05/tohono-oodham-and-arizona-police-stalk.html
The facts and documents were exposed when DBA Press and the Center for Media and Democracy released the results of a year-long investigation: "Dissent or Terror: How the Nation's Counter Terrorism Apparatus, In Partnership With Corporate America, Turned on Occupy Wall Street.”
Beau Hodai, author of the report, told Censored News, "The most shocking thing to me was the depth of intelligence sharing between publicly-funded 'counter terrorism' personnel and private corporations, banks and ALEC. I suspected that this had occurred, but I did not realize how intensive these public-private relationships were. I certainly did not anticipate that, as records show, intelligence gathered by an undercover officer who had infiltrated Phoenix activist groups was most likely being shared with these private interests."


Hodai said he hopes the report and year long study will bring about awareness and change.

"We are now living in a time where many Americans -- if not most Americans -- expect that all of their telecommunications (both phone and email) are being monitored, or collected in some way. In fact, those who believe this are correct. In light of this reality, we have seen many people adopt an attitude of, 'well, I've got nothing to hide, so I don't care if I am monitored.'"

"Nevertheless, the persistent notion that someone is constantly listening in causes a chilling effect in that many people no longer express themselves as freely as they otherwise would. This restraint -- this self-imposed censorship -- only serves to stifle free discussion of ideas -- especially ideas critical of government and the policies that have resulted in this restricted state of communication. What can result is a state where people hesitate to voice their mind. A state without such free discourse is no longer a functioning democracy."

"So, that's the danger. What I'd like to see this: More people becoming aware of what is happening to them and passing information they gather on to others. I'd like to see people learning about their local fusion centers and the activities of these centers. I'd like to see people submitting public records requests and Freedom of Information Act requests with agencies engaged in these fusion centers. We have it within our power to audit the activities of these agencies -- and we should exercise these abilities before we lose them. We can use the information we gather to challenge those leaders who continue to push the nation down this road we are on. Education seems to be the key." 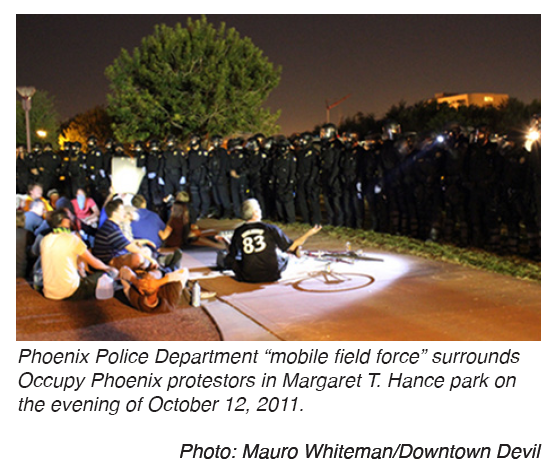 s the ATF was running AK47s to the cartels in Mexico, and homicides soared, Phoenix law enforcement focused on Occupy Phoenix, essentially a handful of people camping.
The absurdity of this spying on activists is magnified by the reports on the obsession of Phoenix area law enforcement with Rev. Jesse Jackson and his visit to Occupy Phoenix.
A Starbucks barista busted the Occupy Phoenix police infiltrator, but there is nothing funny in the pages of police spy documents as law enforcement sought to make criminals of Native American human rights activists, struggling to protect their homelands from destruction and exploitation, and their people from abuse.
The sinister underlying reality reveals the priority of law enforcement in southern Arizona, a priority that allows real crime to proliferate.

The report reveals how federal and state law enforcement monitored Occupy Wall Street activists nationwide. However, the bulk of the report details how counter terrorism personnel engaged in the Arizona Counter Terrorism Information Center (ACTIC, commonly known as the Arizona fusion center) monitored and otherwise surveilled citizens active in Occupy Phoenix, and how this surveillance benefited a number of corporations and banks that were subjects of Occupy Phoenix protest activity, the report states.
“While small glimpses into the governmental monitoring of the Occupy Wall Street movement have emerged in the past, there has not been any reporting -- until now -- that details the breadth and depth of the degree to which the nation's post-September 11, 2001 counter terrorism apparatus has been applied to politically engaged citizens exercising their Constitutionally-protected First Amendment rights,” the report states.
The report reveals for the first time:

·         How law enforcement agencies active in the Arizona fusion center dispatched an undercover officer to infiltrate activist groups organizing both protests of the American Legislative Exchange Council (ALEC) and the launch of Occupy Phoenix and how the work of this undercover officer benefited ALEC and the private corporations that were the subjects of these demonstrations.
·         How fusion centers, funded in large part by the U.S. Department of Homeland Security, expended countless hours and tax dollars in the monitoring of Occupy Wall Street and other activist groups.
·         How the U.S. Department of Homeland Security has financed social media "data mining" programs at local law enforcement agencies engaged in fusion centers.
Read more from the report: http://bsnorrell.blogspot.com/2013/05/government-surveillance-of-occupy.html
at May 24, 2013