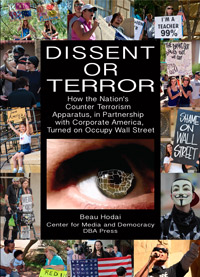 Tohono O'odham Police, Tucson Police and Homeland Security spied on Tohono O'odham and Navajo activists in Phoenix and Tucson. Native activists were spied on at the protest at Salt River Project and in the Occupy Movements in Phoenix and Tucson (see page 20.)
A Phoenix police officer, Saul, was placed as an infiltrator in Occupy Phoenix.
Brenda Dowhan, an analyst for Phoenix police, tracked activists, never charged with a crime, primarily through Facebook and social media.
Dowhan is the "Terrorism Liaison All-Hazards Analyst" at the Arizona Counter Terrorism Information Center (ACTIC) whose job was to monitor Occupy Phoenix and other activists-- primarily through the monitoring of social media.
Tohono O'odham Police were among the agencies tracking activists, according to the report: http://www.prwatch.org/files/Dissent%20or%20Terror%20FINAL.pdf

The U.S. counter terrorism apparatus was used to monitor the Occupy Movement nationwide.
Click here to read CMD's special report, based on a year-long investigation.

Special Report by Center for Media and Democracy and DBA Press

- by Beau Hodai, CMD/DBA
On May 20, 2013, DBA Press and the Center for Media and Democracy  released the results of a year-long investigation: "Dissent or Terror:  How the Nation's Counter Terrorism Apparatus, In Partnership With  Corporate America, Turned on Occupy Wall Street.”   The report, a distillation of thousands of pages of records obtained  from counter terrorism/law enforcement agencies, details how  state/regional "fusion center" personnel monitored the Occupy Wall  Street movement over the course of 2011 and 2012.
The report also examines how fusion centers and other counter terrorism entities that  have emerged since the terrorist attacks of September 11, 2001 have  worked to benefit numerous corporations engaged in public-private  intelligence sharing partnerships.   While the report examines many instances of fusion center monitoring  of Occupy activists nationwide, the bulk of the report  details how counter terrorism personnel engaged in the Arizona Counter  Terrorism Information Center (ACTIC, commonly known as the "Arizona fusion center") monitored and otherwise surveilled citizens active in  Occupy Phoenix, and how this surveillance benefited a number of  corporations and banks that were subjects of Occupy Phoenix protest  activity.
While small glimpses into the governmental monitoring of the Occupy Wall Street movement have emerged in the past, there has not been any reporting -- until now -- that details the breadth and depth with which the nation's post-September 11, 2001 counter terrorism apparatus has been applied to politically engaged citizens exercising their Constitutionally-protected First Amendment rights.
REPORT Dissent or Terror: How the Nation's 'Counter Terrorism' Apparatus, in Partnership with Corporate America, Turned on Occupy Wall Street
REPORT APPENDIX open records materials cited in report.
PRESS RELEASE "New Report Details How Counter Terrorism Apparatus Was Used to Monitor Occupy Movement Nationwide"
SOURCE MATERIALS almost 10,000 pages of open records materials are archived on DBA Press.
PRWATCH ARTICLE "Dissent or Terror: How Arizona's Counter Terrorism Apparatus, in Partnership with Corporate Interests, Turned on Occupy Phoenix"

Key findings of this report include:

Posted by Censored News, publisher Brenda Norrell at May 20, 2013

Ms. Norrell, thank you for publishing this article. It is both enlightening and very disturbing. We must make ourselves aware of how our military structured DHS and our anti-terrorism laws are being broadly used on our own population. Any who suggest that, "if you are not doing anything wrong you have nothing fear" need only read this article to disabuse themselves of such naive notions. This is the police state being used to quash dissent and it is only the beginning.

thanks Ms. Norrell for this great article.