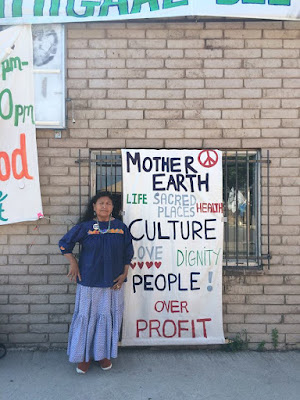 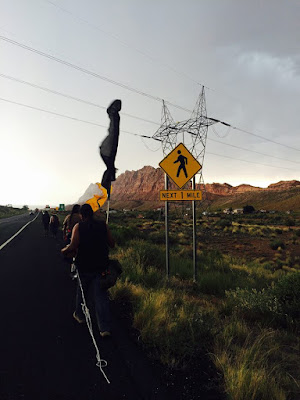 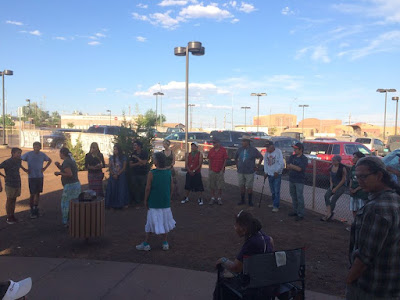 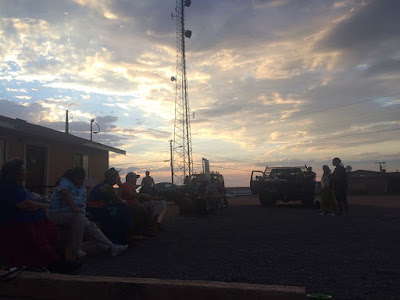 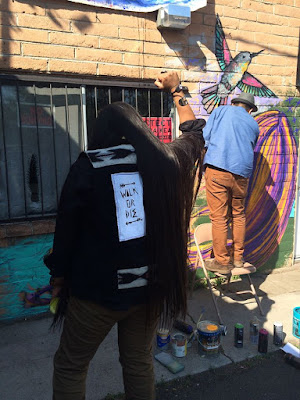 By Nihigaal bee lina
Censored News
We are 85 miles into the journey to Dibé Nistaa. We walked 5 days, rested 1, made ceremonial offerings 2 days and successfully pulled off 3 events. The hottest day we walked through was 106 degrees. Today we hid from the heat in a tunnel beneath the old highway 89 five miles outside of Bodaway/Gap. As we came into Gap, we walked into a rain and hail storm and got completely soaked. This evening we weren't authorized to stay at the Chapter house, but are happy to be warm and camped out with full bellies. These 8 days have been extremely challenging, but tonight as we watch the lightening in the distance we feel the blessings and are reaffirmed in our purpose.
We are calling out to our DINÉ WARRIORS to take a stand in protecting our homelands and carrying on our way of life. We are in a CRISIS. As we walk, we are seeing our beautiful homeland being turned into a toxic waste land that we will not be able to live on. What happens to the land happens to the people. In many communities our people are unable to drink the water, breath the air, and are plagued by illness. Things will only get worse if we DO NOT take action. Come walk in prayer as we journey to our sacred places and make the offerings our ancestors have always made to reaffirm our way of life. Our collective prayer is that our young people fulfill our ancestors' prayers by realizing the beauty in the land and rise to defend our home. It is up to us!
at July 01, 2015 No comments:

Please post & distribute. Nia:wen.
MNN. July 1, 2015. Military planes and weaponry, monuments to war and RCMP recruiting youth at the  “musical ride” to join them in the killing spree. Their theme is to celebrate the genocidal theft of Canada from the ongwe’hon:weh. In 1929 Mousselini said, “Fascism is a merger of state and corporate power”.

Anti-terror Bill C51 is the militarization of CSIS, the secret police and the cops, getting set for another Red River massacre or Louis Riel rebellion. Mercenaries are coming in to take us out. History is being rewritten once again. We ongwe’hon:weh from here to the southern tip of ono’ware:geh [land of the natural people] have known all along. The Greeks, Icelanders and some other European nations are beginning to see the corporate illusion and illegitimacy of freedom. We have had the corporate Nazi boot trying to grind our heads into our own soil.
Today the colonial settlers are celebrating the genocide they are illegally benefiting from for 148 years. In 1867 the colony of Canada got its corporate ISO number from the Vatican. In 1923 Canada applied for membership in the League of Nations. They were disallowed because they were not a country.They are still a colony of England.

It’s part of my oath to the CROWN.
Everyone in the world sees the criminal synthesis called Canada. Canadian settlers drink and celebrate their Canada Day. They have been brainwashed by their education system. Fuhrer Adolph Hiter said: “Give me 3 generations and I’ll change everything through the education system”. General Joseph Goering revealed that their education system drilled the populace for thousands of years to be obedient to the hierarchical rulers. The private schools trained the elite to give the orders and continue the corporate hierarchical system. The Admiralty matrix is all about class and money.

Our Great Peace, struggle and values will break the back of the corporations and the international banks. All war will cease and peace will return.

Who will charge the CROWN with genocide?
The CROWN [City of London] is 100% guilty of genocide and must be charged. For a true celebration, the colonial settlers will have to wait until they make all things right with us, the ongwe’hon:weh. Then we can all celebrate together.
Buffy Sainte Marie has a new song, Power in the Blood: “No time for backhanded compliments from television anchormen, desperate for an incident. Real estate assasins exploiting our predicment. Everything depends upon it being in their interests”.
MNN Mohawk Nation News kahentinetha@mohawknationnews.com more news, books, workshops, to donate and sign up for MNN newsletters, go tomohawknationnews.com  More stories at MNN Archives.  Address:  Box 991, Kahnawake [Quebec, Canada] J0L 1B0 thahoketoteh@mohawknationnews.com For original Mohawk music visit thahoketoteh.ws
RCMP musical ride.
biggest con job in world history. Meltdown.
Bill Gates idiocy.
Musical Ride recruiting video.
Roy Rogers quick shooter hat