Photo Apache Stronghold Save Oak Flat at US Capitol 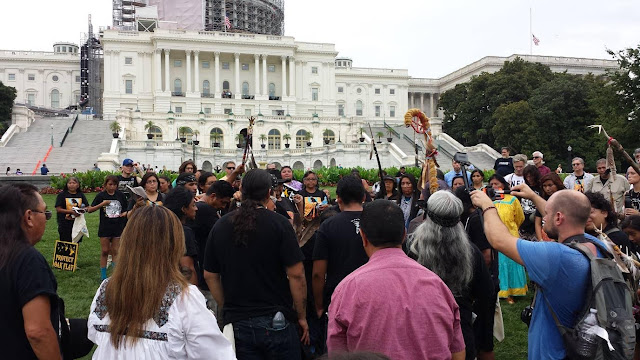 Photo by Dwight Metzger
Apache Stronghold at US Capitol today.
Save Oak Flat!
New photo series of today at:
http://bsnorrell.blogspot.com/2015/07/photos-apache-stronghold-march-on.html
at July 21, 2015 No comments: 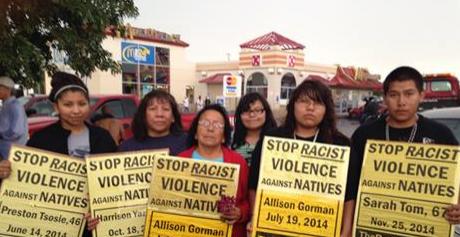 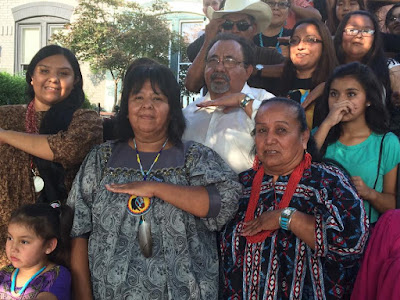 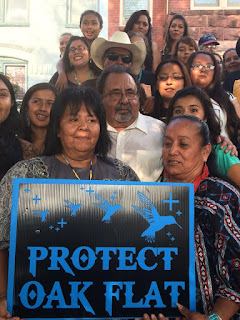 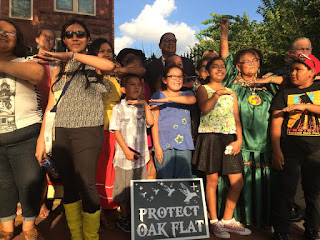 By Center for Biological Diversity
Censored News
The Apache Stronghold caravan has arrived in Washington D.C.
Raúl Grijalva came out to welcome them. 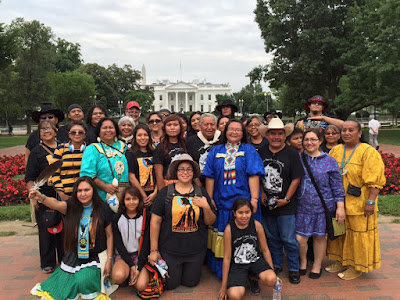 By Apache Stronghold
Censored News
WASHINGTON – Members of the Apache Stronghold will march from Lafayette Square at 9:00 a.m.  on Tuesday morning to the West Lawn of the US Capitol to mark the end of a spiritual journey across the country to protest a bill sneaked in as a rider in the National Defense Authorization Act by Senator John McCain, and Arizona's junior Senator Jeff Flake, which was approved by Congress in the closing hours of it's last session.  That rider traded away Apache sacred land to allow a massive copper mine.
The caravan left Arizona in early July, traveling some 2,000 miles as part of a growing movement to save Oak Flat, where native people have held religious and coming-of-age ceremonies for generations. The copper mine would leave a huge crater—1.8 mile wide and wipe out streams, springs and wildlife habitat. The caravan was in New York City’s Times Square on Friday and arrived in Washington this Monday evening.
Who: Members of the Apache Stronghold caravan, many of them runners, arrive at the U.S. Capitol to conclude their spiritual journey.
Where: The group will run and walk from Rock Creek Park to Lafayette Square and then march to the West Lawn of the U.S. Capitol.
When: 8 a.m. at Rock Creek, 9:00 a.m. at Lafayette Square, and final destination: the West Lawn of the Capitol.
Media availability: Members of the Apache Stronghold are available for interviews.
More information: Tuesday's event marks the final destination of the convoy’s journey from Mount Graham to Oak Flat in the Tonto National Forest in Arizona to Washington, D.C.  Apache Stronghold stopped at Native American reservations along the journey gathering prayers and strength, arrows and eagle feathers, building awareness of the Oak Flat issue as well as recognizing that many Tribes have the same or similar issues with the protection of their sacred sites.  More than 480 Tribes and many environmental organizations, outdoor recreation enthusiasts, animal rights groups and religious congregations support saving Oak Flat.
Following a march from Lafayette Square to the West Lawn of the Capitol, Apache Stronghold and tribal delegates be concluding their spiritual journey across the U.S.
On Wednesday, there will be a rally on the West Lawn (11:00 am- 2:00pm) to Save Oak Flat and support a bill introduced by Congressman Raul Grijalva to repeal the bill passed in December.
at July 21, 2015 3 comments: 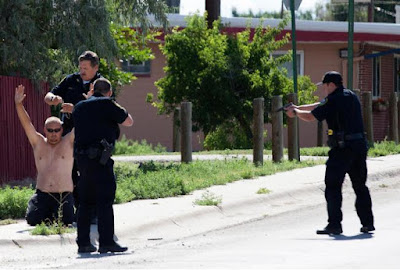 http://county10.com/2015/07/21/arapaho-tribe-calls-for-weekend-shootings-to-be-prosecuted-as-federal-hate-crimes/
(Ethete, Wyo.) – The Northern Arapaho Business Council denounced the murder and attempted murder of two homeless tribal members by a Riverton City Parks and Recreation employee, calling upon the U.S. Department of Justice to prosecute the shootings as hate crimes. The call was issued in a news release issued by the Tribe.
“Stallone Trosper and Sonny Goggles are part of our community, they are members of our Tribe, they are human beings, and they matter to us,” said Northern Arapaho Business Councilman Norman Willow. “We are sickened by what has happened here.”
“The trend of violence against Indian people in and around Riverton is alarming,” said Northern Arapaho Business Council Chairman Dean Goggles. “Our thoughts and prayers are with the families. It’s our responsibility as tribal leaders to do everything we can to try and stop these crimes of hate.”
“We see the need for an investigation by the United States Department of Justice, Civil Rights Division,” said Councilmember Richard Brannan. “The Council has received a steady stream of reports about abusive behavior towards native people. In 2013, a Northern Arapaho woman was shot in the face by a passing car in Riverton, and the Riverton Hospital released her without treatment. Now, another two of our tribal members have been gunned down while in a shelter. I’ve lived here my whole life, and the anti-Indian sentiment seems to be getting worse.”
“We appreciate the public statements from Mayor Baker and Chief Broadhead,” said Councilmember Ronald Oldman. “We are glad to have some good people to work with in the Riverton City Government. We agree that the incident in Charleston, South Carolina, can serve as an example as our community begins to process what has happened here. Like in Charleston, people need to acknowledge that racism played a role in this.” The Business Council plans to meet with City representatives this week.
“This violence against Native Americans has to stop,” said Co-Chairman Ron McElroy. “Community leaders need to be honest about what is happening here. The Tribe has tried to reach out and address some of these matters through intergovernmental agreements we presented to Riverton a few years ago. Last year we hosted the ‘Mending Fences’ symposium, but we need more cooperation from local and federal government to make it clear that these attitudes and this sort of hate is not acceptable.”
Tribal leaders will travel to Washington, D.C. to formally present their request to the Obama Administration.