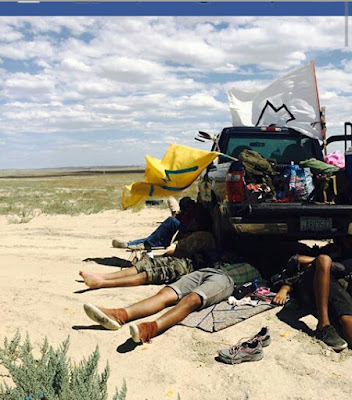 (Photo above) "We're hiding from the sun, it's really hot today. Please feel free to contact us if you'd like to donate a canopy!

CORTEZ, Colo. -- Today in Cortez! Please come out if you are in the area. We will be discussing border town violence, environmental racism, economic development, capitalism, and being Diné.


As we approach Dibé Nitsaa, the elevation climbs, leading to cooler climes, and colder nights. Two of our walkers don't have a sleeping bag, so anyone who can donate a sleeping bag, please do. We are in the Cortez, Colorado area! 'Áshóódí!


Cortez City Park, Cortez, Colorado, 405-534-4620.
****
Journey for Existence is now walking to Dibé Ntsáá (Hesperus, Colorado.) The walkers began in January with their walk to Dził Nahodiłii (Huerfano, NM). They recently walked to Doo'o'k'osliid (San Francisco Peak, Flagstaff, Arizona.) The walkers said, "In the fall we will go all the way to Sisnajiní (Blanca Peak, Alamosa, Colorado). All combined, we will be walking over 1000 miles in 2015." 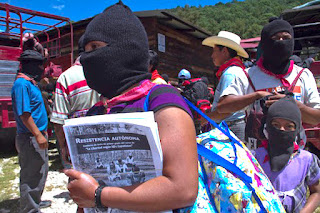 English Espanol
ZAPATISTA ARMY FOR NATIONAL LIBERATION
MEXICO
July 27, 2015
To the National and International Sixth:
To the former students of the Zapatista Little School:
Compas:
The date for the second grade (only for those who passed the first) of the Zapatista Little School is approaching.
As we had previously announced, the dates are July 31 and August 1 and 2 of 2015.
No, don’t rush. This time it isn’t about coming to Zapatista territory. Rather, this time it is about not coming here, at least not for the Little School. The second grade will be everywhere, outside of Zapatista territories.
Let us explain:
As we have already said, we see that the economic situation is really difficult. Well, not just the economic situation. The government repression against the originary peoples, including the Yaquis (in Sonora) and Nahuas (in Santa María Ostula, Michoacán, and in Ayotitlán, Jalisco), and against the democratic teachers union (first in Oaxaca, later it will come in other states) reminds us all that those above do not honor their word and betrayal is part of the way they do politics.
With respect to the economic situation, we know that it is not easy to get together the money for daily things, much less for frequent travel to spend a few days here.
We Zapatistas know very well that if we say come to the Little School to continue learning how to really see us, well there will be people who can.
Read more »
at July 29, 2015 No comments:

Frontera NorteSur ceases publication due to lack of funding 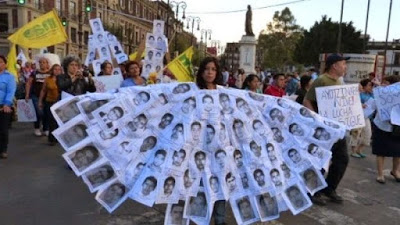 Ayotzinapa: The Missing 43
Censored News regrets that Frontera NorteSur will cease publishing due to a lack of funding. Journalist Kent Paterson and FNS have been a voice for human rights and justice, and for the voiceless, dying, and disappeared. This voice will be missed on the border. -- Brenda Norrell

It is with great regret that I write to inform you of the closing of FNS News that will take place by September 1 of this year.

Keeping FNS News funded had become an increasingly uphill battle, and during this year of severe budget cuts, university funding for FNS News has ceased altogether for the academic year 2015-16.

I would like to take the opportunity to thank all of the readers and in particular those of you who made financial contributions that have been essential to keeping this news-service running.

I would also like to thank Kent Paterson for the quality and consistency of his journalism.  He has brought decades of expertise on Mexico and the Border Region to FNS News.  Over the years his articles have covered a huge variety of issues crucial to the region.  They have been read widely both nationally and internationally by educators, researchers, government agencies, people working in both private and non-profit sector, as well as citizens interested in the Border Region.

The Center for Latin American and Border Studies keeps a physical archive of all past issues that is open for consultation. We also plan to maintain an electronic archive of past issues of FNS News for consultation. Readers can go back and check articles dating from the 1990s through the summer of 2015 on immigration, the drug war, violence against women, New Mexico history, Mexican politics, border economy, and many more topics. The address is:

Please be assured that we will not release your e-mail address to third parties. We will maintain the list to occasionally notify the public of events of interest sponsored by the Center for Latin American and Border Studies at New Mexico State University.

Thank you once again for your constant support and readership. 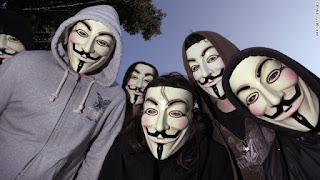 The police murder of an Anonymous member in Dawson Creek B.C., James McIntyre, who was supporting the Treaty 8 battle against Site C dam, and now the unfolding secrets involving the Keystone XL pipeline, reveal the importance of the ongoing Native battles to protect the land, water and air for future generations.
-- Censored News

The Anonymous leak, Canada spying on Obama, and the Keystone pipeline:
"... The group also released a video claiming that the Communications Security Establishment (CSE) tried to spy on President Barack Obama on Prime Minister Stephen Harper’s orders — and that the espionage, when it was discovered, put the Keystone pipeline project in jeopardy."
http://www.thestar.com/news/canada/2015/07/28/anonymous-opens-door-on-secrets.html

Anons: PLEASE MIRROR AND SEND US A YOUTUBE LINK ASAP IN COMMENTS HERE OR TO @OpAnonDown
Public Domain: use, reuse, mash up as you wish.
**PR TEXT**
We begin with a moment of silence for our fallen friend, James McIntyre.
Stephen Harper, Canadian security forces, and their corporate overlords have now determined that anyone opposing their fossil fuel agenda is a terrorist.
This is the immediate and most important context of the murder of JayMack at the hands of RCMP officers in Dawson Creek, British Columbia.
Beginning with:
-covert, warrantless surveillance
-outright police state dystopia at the G-20
-full court pressure against Idle No More
-a series of monstrous crime legislation
-and, finally, Bill C-51,
Canada has made opposing fossil fuel mania with action, words or thoughts into a summary criminal offense of the highest order.
Anonymous has been collecting bits of evidence and making plans for many months. Beginning in June, we launched an all out assault on Canada's Internet infrastructure in opposition to C-51, Canada's secret police bill.
We are also concerned that Stephen Harper and the Conservative Party of Canada will once again use widespread cheating in the upcoming federal elections.
Meanwhile, Canadian security forces and their Five Eyes partners in New Zealand, the UK, Australia, and the U.S. have been extremely pro-active in developing and purchasing offensive hacking capabilities.
Fortunately for us, Canada has been far more lax in defending its own systems. We have just released a secret document from the Canadian cabinet. We are excluding certain document security features, and, accordingly, some heading material. This is a painstaking process. We simply cannot release a document for every story we will be reporting over the coming months.
This first document, though, combined with remarks from Tony Clement after our DDoS attacks last month, show that Harper's cabinet made direct decisions domestically, as well as for foreign spy stations, to update security systems at a leisurely pace over at least a four year period.
Congratulations! You left many doors open for us!
We are now privy to many of Stephen Harper's most cherished secrets.
For instance, shortly after winning a majority in 2011, the NSA discovered that Stephen Harper had grown a bit to big for his Christian britches. He and the Canadian Security Establishment were attempting to spy on their Five Eyes partnes in the U.S. Obama's top intelligence officials were furious when they caught CSE in the act. They vowed to kill off Harper's number one priority, the KXL pipeline.
By the way, Mr. Stephen Blaney, there is nothing more undemocratic than repeatedly cheating at elections then cutting the budget for the elections watchdog. All the while, your government has continued with unprecedented secrecy, antipathy to legitimate media inquiry, and outright contempt independent scientific inquiry.
We repeat our insistence upon the immediate arrest of the RCMP killers of James McIntyre. Unless and until that happens, we will be releasing stunning secrets at irregular intervals. Of course, even if such arrests take place, we will still maintain access to information highly damaging to Stephen Harper and other supporters of Bill-C51.
Enjoy the summer, everyone. Fall will be Wild.
Until then:
We Are Anonymous.
Expect Us.
All your secrets are belong to the mask.

Censored News photos through the years.

Take down order and more for Censored News

Censored News is a small operation, a labor of love. It is a service to Indigenous Peoples and human rights advocates.

So why the bullying from Google Blogger, where I have been posting for the last nine years?

After I published the facts about the take down, perhaps in retaliation, Google Blogger posted an ugly sign on my blog for European readers, warning them about cookies. The ugly sign isn't even correct. Censored News does not use Adsense or any form of advertising.

Further, Google never gave me a copy of the so-called complaint which led to the take down order. So, there is no way to know what the offending content was. The post has multiple links and screenshots on it.

Here's the Censored News WordPress site, which is up and running again. It will serve as a backup in case Google Blogger follows through on its threats and yanks the whole nine years of Censored News work off the Internet. www.censorednews.wordpress.com

For now, we will keep posting on Google Blogger as well. We will let you know if there's more bullying.